Question 1 How is fine sand separated from larger particles? Explain

Question 2 How is scrap iron separated from a heap of waste materials in factories?

Question 3 How will you separate a mixture of iron filling and sulphur powder?

Question 5 How do jewellers separate the pearls of different sizes?

A sieve is a shallow vessel having small holes at its bottom. An iron mesh can also be used as a sieve in some cases. The method of separating a mixture by using sieve is called Sieving.

Sieving is used to separate those solid mixtures which have components of different sizes.

The mixtures having components of different sizes is put in sieve and the sieve is moved back and forth continuously. The larger particles of the mixture cannot pass through the small holes of the sieve and remain behind in the sieve.

The mixture gets separated into two components : one having small particles and the other having larger particles. The size of the holes of a sieve to be used depends on the size of the particles of the material to be separated from the mixture. Sieves of different sizes of holes are used for separating different substances.

(1) The wheat flour which we bring from a flour mill is sieved by using sieve having very small holes.The sieving flour is done to remove the coarse particle of flour from it so as to obtain fine flour for making chapattis. When wheat flour is put in a sieve and the sieve is moved back and forth repeatedly ,the fine particles of flour pass through the small holes of the sieve and collect in the vessel kept below. The bigger particles of wheat bran do not pass through the very small holes of the sieve and remain behind in the sieve. In this way wheat flour is separated from wheat bran and fine flour. 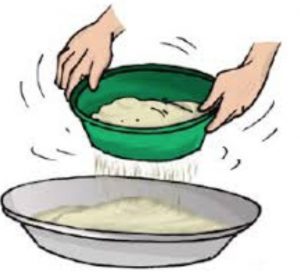 (2) Wheat brought from the fields still contains some impurities like pieces of stone, stalk and husk. In a flour mill, the impurities are removed from wheat before grinding ,by process of sieving. A bagful of wheat is poured on a slanting sieve made of iron mesh. The wheat grains pass through the Sieve whereas pieces of stone ,stalk and husk are left behind.

(3) Fine sand is obtained by method of sieving. The Coarse sand having larger particles and pebbles in it is put on a sieve consisting of a big iron was held in slanting position. The fine sand particles pass through the iron mesh and remain behind.

To separate a mixture of iron filling and sulphur powder 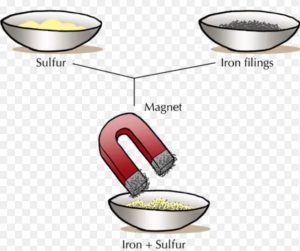 In order to separate iron filling from sulphur ,a horse shoe type magnet is moved on the surface of the mixture. The iron fillings are attracted by the magnet, they cling to the poles of the magnet and get separated. This process has to be repeated a number of times to achieve complete separation of iron filling. Sulphur powder is not attracted by magnet so it remains behind. A mixture of iron filling and sand can also be separated by using a magnet in a similar way .

A carpenter can also separate iron nails from sawdust by the method of magnetic separation. This is because iron nails stick to the magnet but sawdust does not.