Question 2 Describe how will you separate common salt from sea water?

Question 3 Explain the process to recover only salt?

Question 4 State one large scale use of process of evaporation?

The changing of a liquid into vapours or gas is called evaporation. Evaporation is used to obtain a solid substance that has dissolved in water or any other liquid.

The dissolved substance is left as a solid residue when all the water has evaporated. The use of process of evaporation for separating a mixture is based on the fact that liquid vaporise easily whereas solids do not vaporise easily. Evaporation can be made quicker by heating the solution.

If we have a mixture of common salt and water, then we cannot separate salt from water by filtration. This is because common salt is completely dissolve in water and not insoluble in it. We can recover common salt from salt water mixture by the process of evaporation.

The process of evaporation is used on a large scale to obtain common salt from seawater. Sea water is trapped in shallow lakes and allowed to stand there. The heat of Sun gradually evaporates water in the shallow lakes and and common salt is left behind as a solid. Sea water contains many salt dissolved in it.  When sea water is evaporated we get a mixture of salt. Common salt is obtained from this mixture of salt by further purification.

When a sugar solution is evaporated, then water is eliminated and solid sugar is left behind. The substances like Potash alum and potassium nitrate are also separated from the water solution by the process of evaporation.

During the evaporation of a water solution we get the dissolved solid substance but water cannot be recovered in this method. 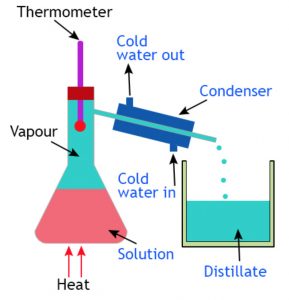 In order to recover both salt as well as water from salt water mixture the process of distillation is used.

Distillation is the process of heating water to form water vapours or steam, and then cooling the hot water vapours to get back liquid water water.

When the hot steam comes in contact with the ice cold bottom of frying pan, it gets cooled and condenses to form drops of liquid water. This pure water is collected in a beaker kept below the frying pan. After all the water of salt water mixture taken in the kettle boils off, salt is left behind in the kettle. This salt can be taken out from the kettle. In this way,  salt water mixture has been separated into salt and water by the process of distillation.