Group 17 of the periodic table contains five elements : fluorine (F), chlorine (Cl), bromine (Br), iodine (I) and astatine (At). These are named as halogens. The name halogens is derived from two Greek words halo meaning sea salt and gens meaning born i.e., sea salt produce because the first three members occur as salts (chlorides, bromides and iodides) in sea water.  These are among the most reactive non-metallic elements. The last member of the family, astatine is a radioactive element.

The halogens are very reactive and therefore, do not occur in the free state. However, all except astatine are abundant in the earth’s crust as halide ions, X¯.

Fluorine and chlorine are fairly abundant while bromine and iodine are comparatively less abundant.  Fluorine is the thirteenth element in order of abundance in crystal rocks of the earth. It is present mainly as insoluble fluorides. The three most important minerals are

The elements of this group have seven electrons in the outermost shell and have the general electronic configuration ns2np5. 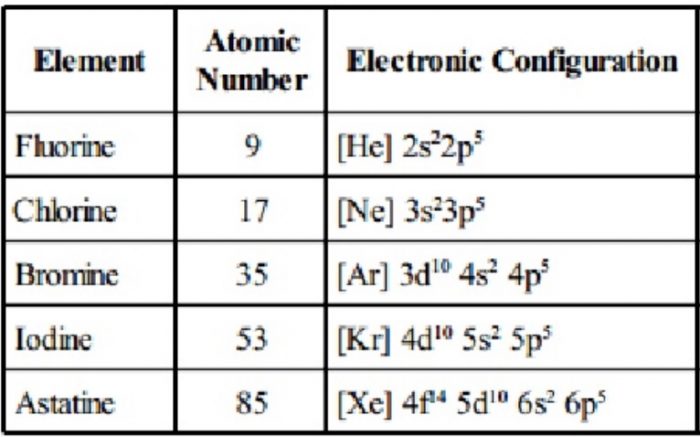 The ionisation enthalpies of halogens are very high. This indicates that they have very little tendency to lose electrons. However, on going down the group from fluorine to astatine, the ionisation enthalpy decreases. This is due to gradual increase in atomic size which is maximum for iodine.

The melting and boiling points of halogens increase with increase in atomic number as we go down the group.

Explanation: The forces existing between these molecules are weak van der Waal’s forces which increase down the group. At room temperature, fluorine and chlorine are gases, bromine is a liquid while iodine and astatine are solids.

(i) All these have maximum negative electron gain enthalpies in their respective periods. This is due to the fact that the atoms of these elements have only one electron less than the stable noble gas (ns2np6) configurations. Therefore, they have maximum tendency to accept an additional electron.

(ii) Electron gain enthalpy becomes less negative from top to bottom in a group. This is due to the fact that the effect of increase in atomic size is much more than the effect of increase in nuclear charge and thus, the additional electron feels less attraction by the large atom. Consequently, electron gain enthalpy decreases.

Halogens have large electronegativity values. The values decrease down the group from fluorine to iodine because the atomic size increases and the effective nuclear charge decreases. Fluorine is the most electronegative element in the periodic table.

Because of very high ionisation energy values, all halogens are non-metallic in character. The non-metallic character decreases as we go down the group.

All the halogens are coloured.

The colour of halogens is due to the fact that their molecules absorb radiations from visible light and the outer electrons are easily excited to higher energy levels. The amount of energy required for excitation depends upon the size of the atom. Fluorine atom is the smallest and the force of attraction between the nucleus and the outer electrons is very large. As a result, it requires large excitation energy and absorbs violet light (high energy) and therefore, appears pale yellow. Iodine needs very less excitation energy and absorbs yellow light of low energy. Thus it appears dark violet. Similarly, we can explain the greenish yellow colour of chlorine and reddish brown colour of iodine.

Halogens have only one electron less than the next noble gas. Therefore, they can get the noble gas configuration either by gaining one electron to form uninegative ion, X¯ or by sharing electrons with other atoms. Thus, they show an oxidation of state of -1 or + 1. Since fluorine is the most electronegative

These higher oxidation states are realised mainly when the halogens are in combination with the small and highly electronegative fluorine and oxygen atoms. The oxidation states of +4 and +6 occur in oxides and oxoacids of chlorine and bromine and +7 oxidation state occurs in interhalogen compounds such as IF7.