These are named as oxygen family after the name of the first member of the group. The first four elements of this group are collectively known as chalcogens (meaning ore forming elements) because many metal ores occur as oxides and sulphides.

The elements of this group have six electrons in the outermost shell and have the general electronic configuration as ns²np4.

The second ionisation enthalpies (IE2) of the members of group 16 are higher than those of group 15. This is because after the removal of first electron, the second electron has to be removed from a more symmetrical half filled configuration (2s2 2px1 2py1 2pz1) which is more stable.

The outermost electron is less and less tightly held by the nucleus as we move down the group and hence ionisation energy decreases.

The melting and boiling points increase with the increase in atomic number as we go down the group.

The first four elements namely oxygen, sulphur, selenium and tellurium are non-metals. The non-metallic character is stronger in O and S are weaker in Se and Te.

Catenation is the tendency of an atom to form bonds with identical atoms. In this group, only sulphur has a strong tendency for catenation. Oxygen also shows this tendency to a limited extent. Thus, the polyoxides and polysulphides of the following types are known :

The other elements of family do not form stable Pπ-pπ bonds and do not exist as M, molecules. The other atoms are linked by single bonds and form polyatomic complex molecules.

For example: Sulphur and selenium molecules have eight atoms per molecule (S8 and Se8) and have puckered ring structure.

All the elements of the group exhibit allotropy.

For example : Dioxygen exists as O2 and O3 (ozone).

Sulphur exists in a number of allotropic forms of which yellow ortho-rhombic, α and β monoclinic forms are most important. 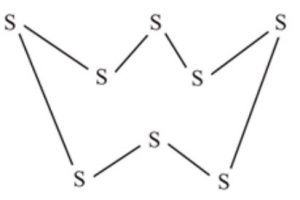 Se8 rings. The thermodynamically stable form is grey-hexagonal metallic selenium which consists of polymeric helical chains. The element exists as common amorphous black selenium. The grey selenium is the only allotrope of selenium which conducts electricity.

Tellurium has only one crystalline form having chain structure similar to that of grey selenium.

(i) Negative oxidation states: Oxygen has a very high value of electronegativity, it tends to achieve noble gas configuration preferably by gaining electrons. Thus, oxygen exhibits oxidation state of-2 in its compounds.

Compounds of S, Se and Te with O are typically tetravalent (+4 oxidation state). These +4 compounds show both oxidizing and reducing properties.

Fluorine brings about the maximum oxidation state of +6 in its compounds. Compounds in +6 oxidation state show only oxidising properties. The higher oxidation state becomes less stable in varying down the group. These compounds are covalent and hence are typically volatile.