The valence shell can be expanded using vacant d-orbitals and hence covalence exceeds four. Both oxygen and sulphur are very reactive and the reactivity decreases as O > S > Se > Te.

Despite of high bond dissociation enthalpy of O2 (493.4 kJ mol-1), the reaction of oxygen are highly exothermic. Once initiated, these reactions continue spontaneously (combustion) or even explosively. Sulphur is also very reactive element especially at high temperatures (which help the cleavage of S-S bonds). It combines with all elements except noble gases, N, Te, I, Pt and Au though their compounds with S are known. It also reacts with H2 slowly at 120°C and more rapidly at 200°C.

(1) Reactivity with hydrogen (formation of hydrides)

The hydrides of S, Se and Te are prepared by the action of acids on metal sulphides, selenides and tellurides respectively. H2S is prepared in the laboratory with the Kipps apparatus by the action of dilute sulphuric acid on FeS.

Water is a colourless, odourless liquid while hydrides of the other elements of this group are colourless, bad smelling, poisonous gases. 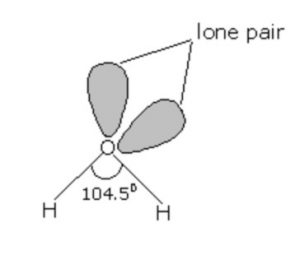 All these hydrides have angular structure which involves sp3 hybridisation of the central atom. For example: In water there are two bond pairs and two lone pairs. Due to the presence of lone pairs, the bond angle in water is less than the normal tetrahedral angle. It has been found to be 104.5°.

As we go down the group, the bond angle in the hydrides decreases as

As we move down the group from O to Te, the size of the central atom goes on increasing and its electronegativity goes on decreasing. The position of bond pairs of electrons shifts more and more away from the central atom in moving from H2O to H2Te.

(i) Volatility : All the hydrides are volatile. The volatility increases from H2O to H2S and then decreases.

Explanation: The high boiling point and therefore low volatility of water is due to the association of H2O molecules through hydrogen bonding. However, hydrogen bonding is not present in other hydrides. The intermolecular forces between the hydrides (except H2O) are van der Waal’s forces. These forces increase with increase in molecular size and therefore, boiling points increase on moving from H2S to H2Se.

The hydrides of this group are weakly acidic in character.

For example: H2S behaves as weak diprotic acid ionising as :

The decreasing acidic strength of the hydride is evident from their dissociation constant (K) values.

All the hydrides except water are reducing agents. The reducing power of these hydrides increases from H2O to H2Te.

This is due to the decrease in thermal stability of the hydrides. Greater the unstability of hybride, the greater is its reducing character.

Oxygen and to a greater extent sulphur differ from the remaining elements in their tendency to form polyoxides and polysulphides, which are less stable than normal salts.

The two common examples are H2O2 and H2S2

H2O2 is fairly stable whereas  H2S2  is unstable and decomposes readily to give sulphur and hydrogen sulphide. The decomposition is accelerated by the presence of hydroxyl ions.

H2O2 is a strong oxidising agent but H2S2 is not.H2O2 form highly associated molecule because of hydrogen bonding while H2S2 forms discrete molecules.

Sulphur forms a few hydrogen polysulphides called sulphanes. Some of these are : 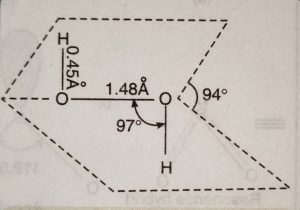 (2) Reactivity with Oxygen (formation of oxides)

Oxides of sulphur are more stable than the corresponding oxides of other elements.

For example: SO2 and SO3 are more stable than the corresponding dioxides and trioxides.

All elements except selenium form monoxides. Sulphur monoxide is formed by heating a mixture of sulphur dioxide and sulphur under reduced pressure at 425-475 K.

All the members of oxygen family (S, Se, Te and Po) form dioxides of the formula EO2 (e.g. , SO2, SeO2, TeO2, PoO2). The dioxides are obtained by direct union of elements :

The dioxides of these elements differ considerably in their properties and structure. SO2 is a gas at room temperature (b.p. = 263 K). In SO2, S atom undergoes sp2 hybridisation. 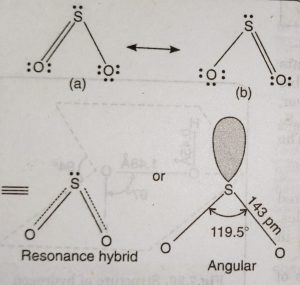 As is clear, the two π bonds are different because one is formed by pπ-pπ overlap and the other is formed by  pπ-dπ overlap. But actually both the S-O bonds have exactly same bond length (143 pm). This is because of resonance between two structures. The SO2 molecule is resonance hybrid of two structures (a) and (b).

The multiple bonding in S-O bond in SO2 is due to pπ-pπ  or pπ-dπ bonding.There is possibility of pπ-dπ bonding due to overlap of filled pπ orbitals of oxygen with vacant 3d-orbitals of sulphur.

SeO2 is a white crystalline solid. In the gaseous state, it exists as discrete molecules having structure similar to SO2 (a). In the solid state, it has a polymeric structure consisting of infinite chains (b).

TeO2 and PoO2 are also non-volatile crystalline ionic solids and occur in two crystalline forms each. The dioxides of elements of group 16 have different structures because the tendency of these elements to form pπ-pπ multiple  bonds decreases as the atomic size increases down the group.

(1) SO2 dissolves giving H2SO3 which exists only in solution and cannot be isolated.

The gas is, therefore, known as sulphurous anhydride. Therefore, the aqueous solution is acidic turning blue litmus to red, Ir the solution is boiled, all the sulphur dioxide may be removed.

SeO2 dissolves in water giving selenious acid, H2SeO3 which can be isolated in a crystalline state. TeO2 is almost insoluble in water. However, TeO2 dissolves in alkalies to form tellurites and in acids to form basic salts showing that it behaves as amphoteric.

All the elements of this group form trioxides of the formula EO3.

Amongst trioxides SO3 is most important, while SeO3 and TeO3 are also known.

Sulphur trioxide is prepared by direct combination of sulphur dioxide and Oxygen in the presence of finely divided platinum or divanadium pentoxide at 2 atmospheric pressure and 450°C.

The vapours of sulphur trioxide formed are collected in a receiver and cooled by freezing mixture.

a) It can also be prepared by the dehydration of sulphuric acid with phosphorus pentoxide.

(1) SO3 has trigonal planar structure in the gaseous state in which S atom is sp2 hybridised.

(3) The sulphur atom in the excited state is now left with one p and two d-orbitals which overlap with p-orbitals of O to form three π-bonds.

(4) In this one p-orbital of O form pπ-pπ bond with p-orbital of S while other two O atoms overlap with d-orbitals of S atom forming pπ-dπ bonds.

(5) Therefore, SO3 molecule has a trigonal planar structure. The bond angles in SO3 are exactly 120° each and S=0 bond lengths are 142 pm.

(7) The molecules of SO3 are held together by weak van der Waal’s forces of attraction. Therefore, it exists as a gas at room temperature. However, in the solid state, it exists as linear polymeric chain structure or cyclic trimer.

SeO3 is prepared by the direct oxidation of Se or SeO2. It is white hygroscopic solid having melting point 118°C. It exists as monomer in the vapour state and as a cyclic tetramer (Se4O12) in the crystalline state.

(3) Reactivity with halogens (formation of halides)

The elements of group 16 form a large number of halides of the type EX6 ,EX4 and EX2 (X=halogen).

The stability of the halides decrease in the order

The stability of the halides decreases in the order:

All the elements except selenium form stable dichlorides and dibromides.

Amongst the dihalides, SCl2 is best known. SCl2 is angular in shape. In this case S atom undergoes sp3 hybridisation, in which two positions are occupied by lone pairs of electrons. Two sp3 hybrid orbitals of sulphur overlap with 3p-orbitals of chlorine atoms to form two S-Cl bonds. The geometry is distorted due to the presence of lone pairs and the bond angle is about 103° instead of normal tetrahedral angle of 109.5°.

Amongst tetrafluorides, SF4 is a gas, SeF4 liquid and TeF4 solid.

SF4 is highly reactive and is most stable than lower fluorides. 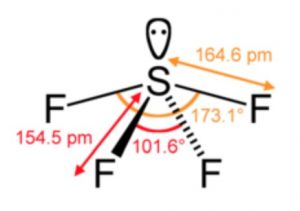 These tetrafluorides (e.g SF4) involve sp3d hybridisation and have trigonal bipyramidal structure in which one of the equatorial positions is occupied by a lone pair of electrons. This geometry is regarded as see-saw geometry. Due to larger lone pair-bond pair repulsion than bond pair-hond pair repulsion, the bond angle decreases from 180° to 173°.

Only sulphur forms one pentahalide, S2F10. In this two SF5 units are linked through sulphur atoms having octahedral geometry.

Among hexahalides, only hexa fluorides are stable compounds.These are all gaseous in nature. SF6 is extremely stable and chemically inert for stearic reasons. In SF6 the six F atoms protect the sulphur atom from attack by reagents to such an extent that even thermodynamically most favourable reactions like hydrolysis do not occur. In contrast, the less stearically hindered SF4 undergoes hydrolysis readily.

SF6 has an octahedral structure in which sulphur undergoes sp3d2 hybridisation. 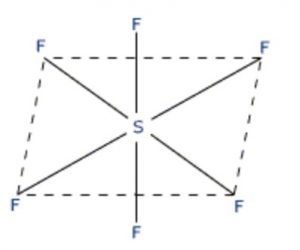