You are here: Home / Class 12 / Chemistry / General Principles and Processes of Isolation of Elements / Crushing, Grinding and Concentration of the Ore

Oxidation is carried out by de-electronation i.e. removing electron directly or indirectly.

Reduction is carried out by electronation i.e. by providing electron directly or indirectly.

Non-metallic elements are extracted from their combined states by oxidation.

For example: halogens such as chlorine can be obtained by the addition of Cl¯ ions in water:

The oxidation of Cl¯ can be done by electrolysis. The minimum potential difference required for electrolysis process is 2.2 V.

Elements like oxygen, nitrogen and noble gases are present in air and can be isolated from it. Carbon, sulphur and phosphorus are extracted either from their native ores or by the oxidation from their compounds occurring in nature. 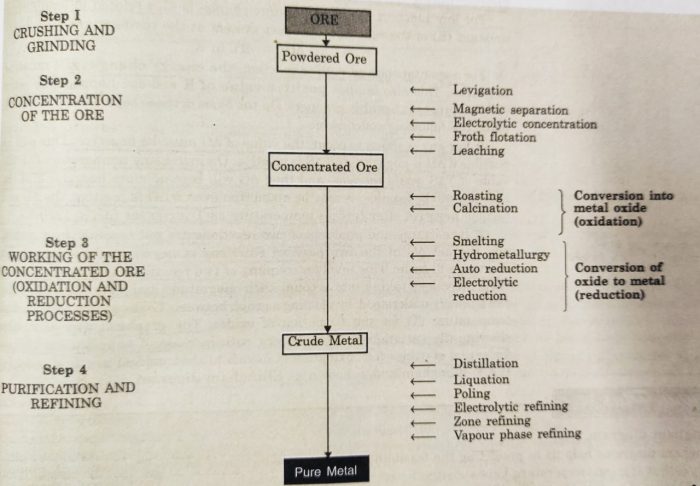 The process of extracting metals from their ores is called metallurgy.

The ores are generally contaminated with earthly or undesired materials (impurities). These are called gangue or matrix.

The process of metallurgy depends upon the nature of the ore and the impurities present in it.

Some common steps involved in the metallurgical operations are :

(1) Crushing and Grinding of the Ore

The ores occur in nature as huge lumps. They are broken to small pieces with the help of crushers or grinders. These pieces are then reduced to fine powder with the help of a ball mill or stamp mill. This process is called pulverisation.

(2) Concentration of Ore or Ore Benefaction

The ores are usually found mixed up with large amounts of non-metallic impurities such as, sand, mica, limestone, felspar, earthy and rocky impurities.
These unwanted impurities are called gangue or matrix and have to be removed before extracting the metals.

The process of removal of unwanted impurities (gangue) from the ore is called ore concentration or ore dressing or ore benefaction.

The powdered ore is concentrated by one of the following methods depending upon the differences in physical properties of the compound of the metal present and the impurities
gangue) present in the ore.

The ore is separated from the main stock in a sufficient degree of purity by simply picking it by hand and then breaking away the adhering rocky materials with a hammer.

For example: this method is used for oxide ores such as hematite, tin stone and native ore of Au, Ag, etc. The powdered ore is fed into a stream of running water when the lighter
impurities are washed away and the heavier ore particles are left-behind.

In order to concentrate the ores in bulk, two commonly used methods of gravity separation are: 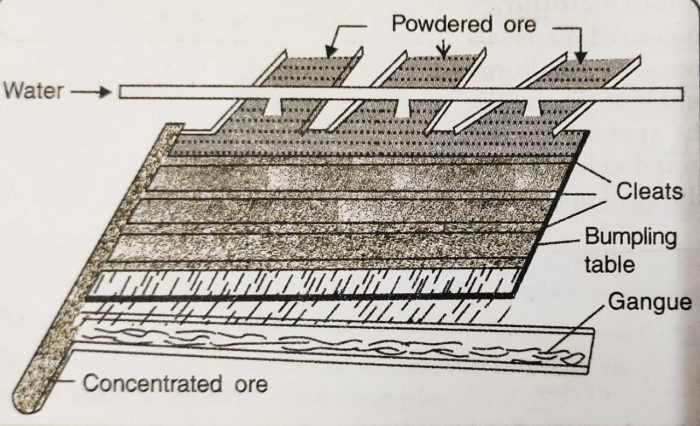 a) A Wilfley table is a wooden table having slanting floor on which long wooden strips called riffles or cleats are fixed.

b) The powdered ore is mixed with water and introduced at one end of the table.

c) The table is given regular rocky motion.

d) The heavier ore particles are obstructed by the riffles while the lighter impurities are carried away by the stream of water.

e) The heavier ore particles which get collected behind the riffles move to one side as a result of motion of the table and are collected.

f) This method is particularly useful for the concentration of native gold ore or cassiterite (SnO.) 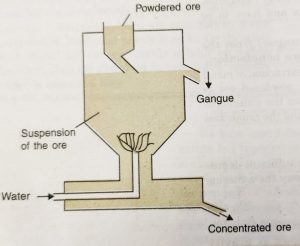 a) The hydraulic classifier consists of a large conical reservoir fitted with an ore inlet at the top and water inlet at the bottom.

b) There is a provision to remove light gangue particles from the side near the top and concentrated ore from the bottom.

c) In this method, the powdered ore is dropped through a hopper into the hydraulic classifier from the top.

d) A powerful stream of water is forced into it through the pipe at the bottom of the reservoir.

e) The lighter particles of the gangue are carried up by the current of water and pass out along with water flowing out from the outlet near the top.

f) The heavier particles of the ore get collected at the base of the cone.

g) The conical shape of the reservoir helps in reducing the velocity of water and this prevents the ore particles from being carried away along with the stream of water.

h) This method is also called levigation and is used for iron, gold, chromium, etc. 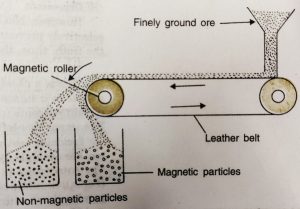 This is based on the differences in magnetic properties of the ore components. If either ore or the gangue (one of these two) is attracted by a magnet then ore can be separated from the impurities with the help of magnetic separation method.

1) The magnetic impurities such as iron and manganese tungstates (FeWO4 ,MnWO4) present in tin stone (SnO2, non-magnetic) are separated by this method.

2) Chromite (FeO.Cr2O3) is magnetic and it can be separated from non-magnetic silicious gangue by this method. This method is also used for the concentration of haematite (Fe2O3) or magnetite (Fe3O4), pyrolusite (MnO2), ilmenite (ore of titanium), etc.

a) It consists of a brass or leather belt moving over two rollers, one of which is magnetic in nature.

b) Powdered ore is dropped over the moving belt at one end.

c) At the other end, the magnetic portion of the ore is attracted by the magnetic roller and falls nearer to the roller while the non-magnetic impurities fall farther at.

This method is used for the separation of metallic materials from the non-metallic materials. It is based on the principle that when an electrostatic field is applied, the particles which are good conductors of electricity become electrically charged and are consequently repelled
by electrode having the same charge and are thrown away.

This method is used for the concentration of lead sulphide and zinc sulphide ores occurring together in nature,.

a) The powdered ore is fed upon a roller in a thin layer and subjected to the influence of an electrostatic field. 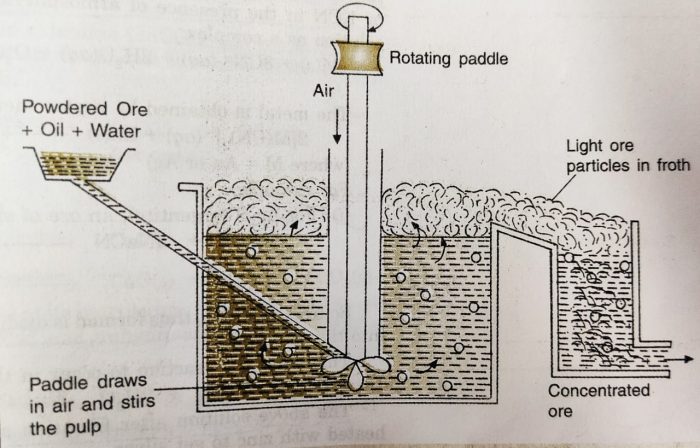 This method is based on the principle of difference in the wetting properties of the ore and gangue particles with water and oil.

It is used for the extraction of those metals in which the ore particles are preferentially wetted by oil and gangue by water.

This method has been used for the concentration of sulphide ores, such as galena (PbS), zinc blende (ZnS), copper pyrites (CuFeS2), etc.

The sulphide ore particles are preferentially wetted by oil and gangue particles by water.
a) In this method, the powdered ore is mixed with water to form a suspension in a tank.

b) To this suspension small quantities of collectors and froth stabilisers are added.

d) The mineral ore particles become wet by oil while the gangue(impurities) particles by water.

e) The water is agitated by a rotating paddle or by blowing air violently, when froth (or foam) is formed.

f) During the process, the ore particles which are preferentially wetted by the oil become lighter. The froth carries the lighter ore particles along with it to the surface.

g) The heavier impurities are left behind in water and these sink to the bottom. Since the ore particles float with the froth at the surface, this process is called froth floatation process.

h) The froth is either skimmed off from the surface or transferred into another tank. The froth is broken by adding some acid and ore particles are separated by filtration and dried.

Therefore, it acts as a depressant.

However, NaCN does not prevent PbS from forming the froth. Thus it selectively prevents ZnS from coming to the froth but allows PbS to come with the froth. Thus, the two ores can be separated by the use of a depressant

This is a chemical method of concentration and is useful in case the ore is soluble in a suitable solvent.

In this method, the powdered ore is treated certain reagents in which the ore is soluble but the impurities are not soluble. The impurities left undissolved are removed by filtration.

a) The ore of aluminium, bauxite, is concentrated by this method. The bauxite ore is contaminated with impurities of silica (SiO2), iron oxides (Fe2O3), titanium oxide (TiO2), etc.

b) Concentration is carried out by digesting powdered ore with a concentrated solution of sodium hydroxide at 473 – 523 K and 35-36 bar pressure.

c) In this process Al2O3 dissolves in alkali to form soluble sodium aluminate and silica (SiO2) dissolves as sodium silicate, leaving behind the impurities.

d) The solution of sodium aluminate is filtered, cooled and its pH is adjusted downward by dilution or by neutralisation with carbon dioxide.

e) It is agitated for two to three hours when Al2O3 is precipitated.

f) The sodium silicate remains in the solution and the precipitated hydrated alumina is separated by filtration. It is dried and upon heating to 1470 K gives pure alumina.

This process is known as Baeyer’s process.

The ore containing native metal (silver or gold) is treated with a dilute solution (0.5%) of NaCN or KCN in the presence of atmospheric oxygen. The metal dissolves in the solution as a complex.

The metal is obtained by replacement reaction as :

Sodium sulphide, thus formed is oxidised to sodium sulphate by blowing air into the solution.

This helps the reaction to occur in the forward direction.

The above solution after filtration and removing insoluble impurities heated with zinc to get silver.

(ii) Gold is also extracted in a similar way.

This process is known as Mac Arthur Forest Cyanide Process.