Electrolysis is a process in which chemical changes take place by the passage of electric current. The cells used to carry out electrolysis are electrolytic cells 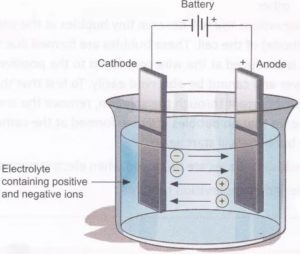 1) The process of electrolysis is carried out by taking the solution of an electrolyte in a suitable vessel. The vessel is called electrolytic tank.

2) It is made up of either glass or of a material which is a bad conductor of electricity.

3) Two metallic rods or plates are suspended in the electrolytic solution. These are connected to the terminal of a battery with the help of metallic wires.

The anions on reaching the anode give up their electrons. On the other hand, cations take up the electrons from the cathode Therefore, cations and anions get discharged at the respective electrodes and are converted to neutral particles. This is known as primary change. The primary products may be collected as such or they undergo further changes to form molecules or compounds. These are called secondary products and the change is known as secondary change.

According to ionic theory, the electrolytes are present as ions in solution and the function of electricity is only to direct these ions to their respective electrodes. The electrolytes can be electrolysed only in the dissolved or molten state.

Simplest electrolytic cell consists of two copper rods dipping in an aqueous solution of copper sulphate. When electric current (DC voltage) is applied to the two electrodes, then Cu2+ ions discharge at the cathode (negatively charged electrode) and the following reaction takes place:

Copper metal is deposited at the cathode.

At the anode, copper is converted to Cu2+ ions by the reaction:

In terms of oxidation and reduction, copper is oxidised at anode while it is reduced at cathode.

Many other metals such as Na, Mg, Al, etc. are also produced on a large scale by electrochemical reduction of their respective cations where no suitable chemical reducing agents are available for the reduction.

Thus, if w gram of the substance is deposited on passing Q coulombs of electricity, then

where Z in a constant of proportionality and is called electrochemical equivalent. If a current of I amperes is passed for t seconds, then

Electrochemical equivalent of a substance may be defined as the mass of the substance deposited when a current of one ampere is passed for one second, i.e. a quantity of electricity equal to one coulomb is passed.

It states that when same quantity of electricity is passed through different electrolytic solutions connected in series, the weights of the substances produced at the electrodes are directly proportional to their chemical equivalent weights.

For example: When same current is passed through two electrolytic solutions, containing copper sulphate (CuSO4) and silver nitrate (AgNO3) connected in series, the weights of copper and silver deposited are :

According to Faraday’s law, the amount of chemical change occurred i.e. the moles of substances deposited or liberated is proportional to the number of moles of electrons exchanged during the oxidation-reduction reactions that occur.

During the passage of electric current through molten NaCl,  sodium gets deposited at cathode and chlorine is liberated at anode.

Similarly, at anode, chloride ions give up electrons and produce Cl atoms as:

The charge on one mole of electrons is called 1 Faraday, F.

Thus, charge on n mol of electrons will be equal to

Similarly, 1 mol of Cl2 is obtained by 2 mol of electrons or 2 × 96500 C of charge during electrolysis of NaCl. Similarly, in the reaction

The amount of substance deposited or evolved can be calculated. For example: aluminium gets deposited as:

Thus, 1 mol of Al will be deposited by 3 mol of electrons or 3 Faraday of electricity.

When the same quantity of electricity is passed through different electrolyte solutions, connected in series, the weights of different substances produced at the electrodes can be calculated from the mole ratios of their electrode reactions.