EC. Frankland was the first chemist to synthesise an organometallic Compound, dimethylzinc, (CH3)2Zn in 1848. He also prepared other compounds containing metal-carbon bonds such as :

The compounds containing metal-carbon double bond are called π-bonded organometallics. These are usually formed by transition elements. The common examples are :
(i) Zeise’s salt K[PtCl3(C2H4)]
In this structure the three Cl-atoms and the middle point of ethylene double bond form a square plane. The platinum atom is present in the centre of the square and C = C double bond of ethylene molecule is perpendicular to plane containing Pt and Cl atoms.
It is written as K[PtCl3(η2-C2H4)]- The number of carbon atoms bound to the metal is indicated by the Greek letter ‘η’ (eta) followed by a number. In this case, Pt is bound to two carbon atoms and therefore, it is written as η2. 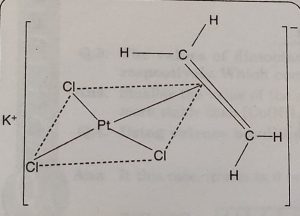 (ii) Ferrocene or bis (cyclopentadienyl) iron, Fe(η2-C2H5)2
The structure of ferrocene is regarded as sandwich structure in which the iron atom is sandwiched between two C2H5 organic rings. The planes of the rings are parallel so that all the carbon atoms are at the same distance from the iron atom.
Ruthenocene, Ru(C5H6) and osmocene Os(C5H5)2 have structures similar to ferrocene.
(iii) Dibenzene chromium, Cr(η6-C6H6)2 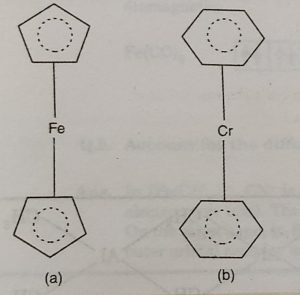