Two or more compounds having the same molecular formula but different arrangement of atoms are called isomers and the phenomenon is called isomerism. Because of different arrangement of atoms, isomers differ in one or more physical or chemical properties.
Isomers can be broadly classified into two major categories :
(A) Structural isomers
(B) Stereoisomers
Structural isomers
1. Ionisation isomerism
2. Hydrate isomerism
3. Coordination isomerism
4. Linkage isomerism
Stereoisomers
1. Geometrical isomerism
2. Optical isomerism

The isomers which have same molecular formula but different structural arrangement of atoms or groups of atoms around the central metal ion are called structural isomers.

The compounds which have same molecular formula but give different ions in solution are called ionisation isomers. In this type of isomerism, the difference arises from the interchange of groups within or outside the coordination entity. This type of isomerism occurs when the counter ion in a coordination compound is itself a potential ligand.
For example: There are two isomers of the compound of the formula Co(NH3)5BrSO4
(a) One of these is red-violet and forms a precipitate with BaCl2 indicating that sulphate ion is outside the coordination entity.
(b) The second one is red and does not form precipitate with BaCl2 but forms a precipitate of AgBr with silver nitrate indicating that bromide ion is outside the coordination entity.
The structures of the two compounds and their mode of ionisation are :
[CoBr(NH3)5]SO4     →   [CoBr(NH3)5]2+ + SO42-
Pentaamminebromido –
cobalt(III) sulphate         Gives test of SO42- ions
Structure
(Red-violet)
[CoSO4(NH3)5]Br    →    [CoSO4(NH3)5]+ + Br¯
Pentaamminesulphato-
cobalt(III) bromide                 Gives test of Br¯ ions
(Red)
Other compounds showing this type of isomerism are:
(i) [CoCl2(NH3)4]NO2 and [CoCl(NO2)(NH3)4]Cl
(ii) [Co(NO3)(NH3)]SO4  and [Co(SO4)(NH3)5]NO3
(iii) [PtCl2(NH3)4]Br2 and [PtBr2(NH3)4]Cl2
(iv) [CoCl(NO2)(NH3)4]Cl and [CoCl2(NH3)4]NO2

The compounds which have the same molecular formula but differ by whether or not a solvent molecule is directly bonded to the metal ion or merely present as free solvent molecules in the crystal lattice are called solvate isomers.
It is also  known as hydrate isomerism where water is involved as a solvent.Thus, hydrate isomers differ in the number of water molecules present as ligands or as molecules of hydration.
In type of isomerism water molecules may occur inside and outside the coordination sphere as a coordinated group or a water of hydration.
For example, there are three isomers having the molecular formula CrCl3⋅6H2O.
These are :
(CrCl3(H2O)3], [CrCl(H2O)5]Cl2⋅H2O and [CrCl2(H2O)4]Cl⋅2H2O
(i) [Cr(H2O)6]Cl3 : It does not lose water when treated with conc. H2SO4 and three chloride ions are precipitated with AgNO3.
(ii) [CrCl(H2O)5]Cl2⋅H2O
Blue green
It loses one water molecule when treated with conc. H2SO4 and 2Cl¯ ions are precipitated with AgNO3
(iii) (CrCl2(H2O)4]Cl.2H2O : It loses two water molecules on treatment with conc. H2SO4 dark green and one Cl¯ ion is precipitated with AgNO3.
Similarly, the following two isomers are hydrate isomers :
[CoCl(en)2(H2O)]Cl2      and  [CoCl2(en)2]Cl.H2O
[CoCl(H2O)(NH3)4]Cl2   and  [CoCl2(NH3)4]Cl.H2O
[CrCl2(C2H5N)2(H2O)2]Cl and [CrCl3(C2H5N5)2H2O].H2O

The compounds which have the same molecular formula but differ in the mode of attachment of a ligand to the metal atom or ion are called linkage isomers.
For example: In NO2¯ ion, the nitrogen atom as well as the oxygen atom can donate their lone pairs. This gives rise to isomerism.
If nitrogen donates its lone pair, one particular compound will be formed.
If oxygen donates its lone pair, a different compound (although having the same molecular formula) is obtained. If the bonding is through N, the ligand is named as nitrito-N(or nitro) and if it is through O, it is named as nitrito-O (or nitrito).
NO2¯ nitrito-N (or nitro)
ONO¯ nitrito-O (or nitrito)
For example: Jorgensen discovered such behaviour in the complex [(Co(NH3)5(NO2)]Cl. He prepared two different pentaamminecobalt(II) chloride each containing the NO2 group in the complex ion. These are:
The unidentate ligands which can bind to the central atom through two donor atoms are also called ambidentate ligands.
Other examples of ligands are:
CN  Cyano (through C)
NC Isocyano (through N)
SCN Thiocyanato (through S)
NCS Isothiocyanato (through N)

Stereoisomers are those isomers which have the same position of atoms or groups but they differ in the spatial arrangements around the central atom. Two types of isomerism viz., geometrical isomerism and optical isomerism.

(iii) Square planar complexes of the type MABCD show three isomers. The structures of these isomers can be written by fixing the position of one ligand (say A) and placing the other ligands B, C and D trans to it.

The complex [Pt(NO2)(py) (NH2OH)(NH3)]+ exists in three geometrical isomers as represented below:

(iv) Geometrical isomerism cannot occur in complexes of the type MA4 , MA3B or MAB3 because all possible spatial arrangements for any of these complexes will be exactly equivalent.
(v) The square planar complexes containing unsymmetrical bidentate ligands such as [M(AB)2] also show geometrical isomerism. For example, the complex [Pt(gly)2] where gly = NH2CH2COO¯ exists in cis and trans form : 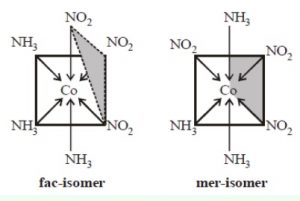 When the three ligands (with same donor atoms) are on the same triangular face of the octahedron, the isomer is called facial or fac isomer. 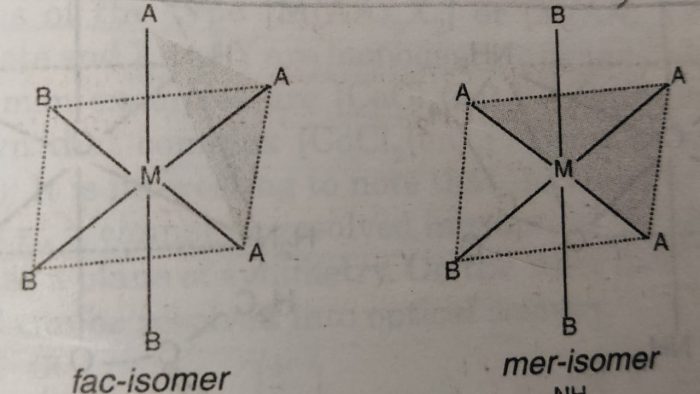 (4) Octahedral complexes having six different ligands of the type M(ABCDEF) would exhibit geometrical isomerism. These isomers may be written by fixing a ligand at one position and then placing the other ligands trans to it.

15 different isomers are possible for such type of complexes. The only compound of this type that has been prepared is [Pt(Br)(Cl)()(NO2)(py)(NH3)]. 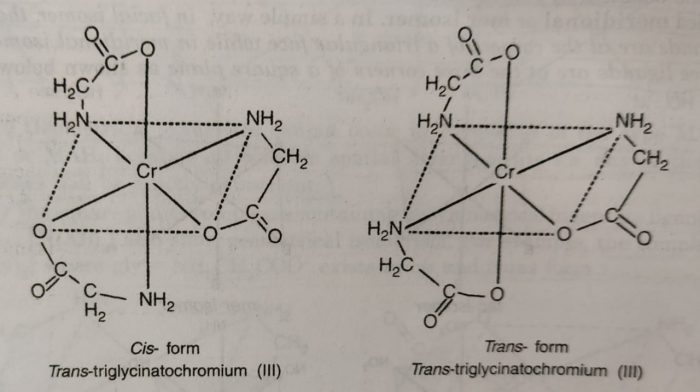 These optical isomers also possess the property of chirality (handedness). The essential condition for a substance to show optical activity is that the substance should not have a plane of symmetry in its structure. The optical isomers have identical physical and chemical properties. They differ only in the direction in which they rotate the plane of polarised light.

The common examples of complexes showing optical isomerism are octahedral complexes having bidentate ligands.
For example, 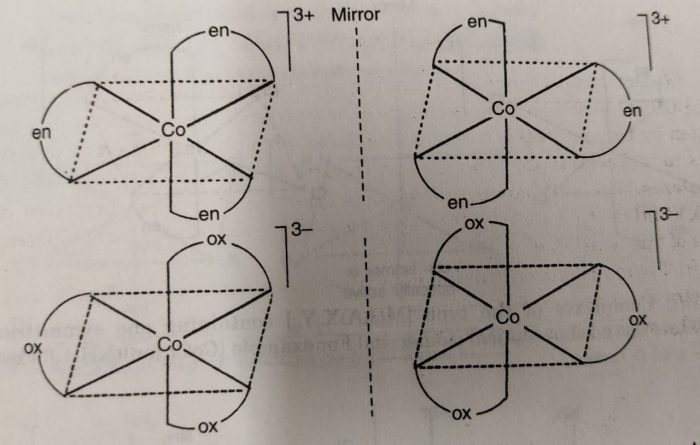 (ii) Complexes of the type [M(AA)2X2] or [M(AA)2XY] (where AA is symmetrical bidentate and X and Y are monodentate ligands) also exhibit optical activity. 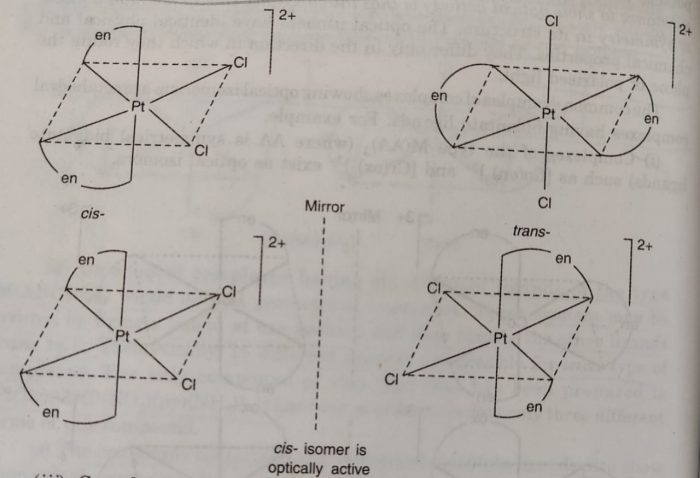 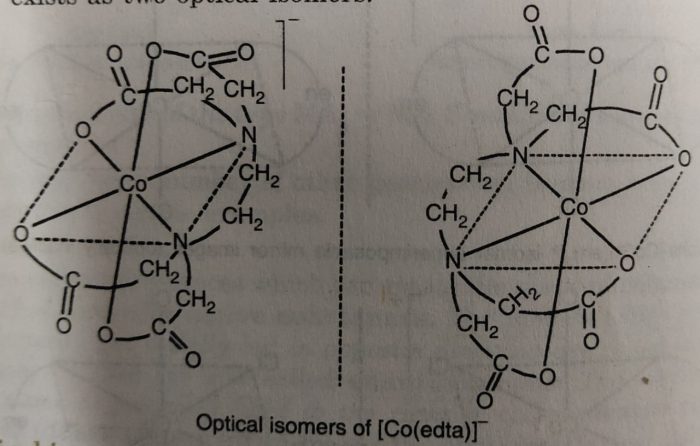