Some reactions are first order each with respect to two different reactants i.e.,

If one of the reactants is present in high concentration (solvent) then there is very little change in its concentration. The concentration of that reactant remains practically constant during the reaction.

Consider the hydrolysis of ethyl acetate:

on the concentration of ethyl acetate and hence

[H2O] can be takes as constant so that

Thus, the reaction appears to be second order but follows the first order kinetics. Such reactions which appear to be of higher order but actually follow lower order kinetics are called pseudo chemical reactions.

Molecularity is two while order is one.

Collision theory was put forward by Max Trautz and William Lewis in 1916-18. It is based on kinetic theory of gases.

According to this theory,

1) the reactant molecules are assumed to be hard spheres and reaction is postulated to occur when molecules collide with each other.

3) For instance, under ordinary conditions of temperature and pressure, in a gaseous system, the collision frequency of binary collisions is of the order of 1025 to 1028.

4) If all the collisions are effective in forming the products, the reactions must be completed in a very short time.

5) All the collisions among the reacting species at a temperature are not effective in bringing about the chemical reaction.

The collisions which actually produce the products and therefore, result in the chemical reactions are called effective collisions.

There are two important barriers to a reaction namely

(i) Energy barrier: For the reacting species to make effective collisions, they should have sufficient energy to break the chemical bonds in the reacting molecules. The minimum amount of energy which the colliding molecules must possess is known as threshold energy. This means that only those collisions of reactants will give products which possess energies greater than threshold energy.

(ii) Orientation barrier: The colliding molecules should also have proper orientation so that the old bonds may break and new bonds are formed.

During this reaction, the products molecules are formed only when the colliding molecules  have proper orientation at the time of collisions. These are called effective collisions.

When the molecules do not have proper orientation at the time of collision, they result in ineffective collisions and do not form the products.

Consider the reaction of bromoethane with OH¯ ions to form methanol. The OH¯ ion must attack the positively charged carbon to form an intermediate which changes to product after elimination of Br¯ ion. If OH¯ does not get proper site for attack, reaction will not occur. First an intermediate is formed by the attack of OH‾ at the site away form Br¯ and finally product is formed as shown ahead :

Thus, the main points of collision theory are summed up below:

(i) For a reaction to occur, there must be collisions between the reacting species.

(ii) Only a certain fraction of the total number of collisions are effective in forming the products.

(iii) For effective collisions, the molecules should possess sufficient energy as well as orientation.

Thus, the rate of reaction is proportional to

(a) the number of collisions per unit volume per second (collision frequency, Z) between the reacting species,

(b) the fraction of effective collisions (properly oriented and possessing sufficient energy), f

Dependence Of Reaction Rates On Temperature

The rate of a reaction or rate constant becomes almost double for every 10° rise in temperature. This is also called temperature coefficient. It is the ratio of rate constants of the reaction at two temperatures differing by 10°.

Explanation for Increase in Rate of Reaction with Rise in Temperature

According to collision theory of chemical reactions, the rate of a reaction depends upon collision frequency (Z) and fraction of the effective collisions (f).The increase in rate of reaction with temperature is brought about by either of the two or a combination of both factors.

These are discussed below :

All the molecules in a substance do not possess the same kinetic energy. This is due to collisions between the moving molecules so that their energies are transferred from one molecule to another. Thus, there is a distribution of kinetic energies among reacting molecules. If the energy of molecules are plotted against the corresponding fraction of molecules, NE/NT with a given energy at a particular temperature, a curve is obtained. This is called Maxwell’s distribution of energies. 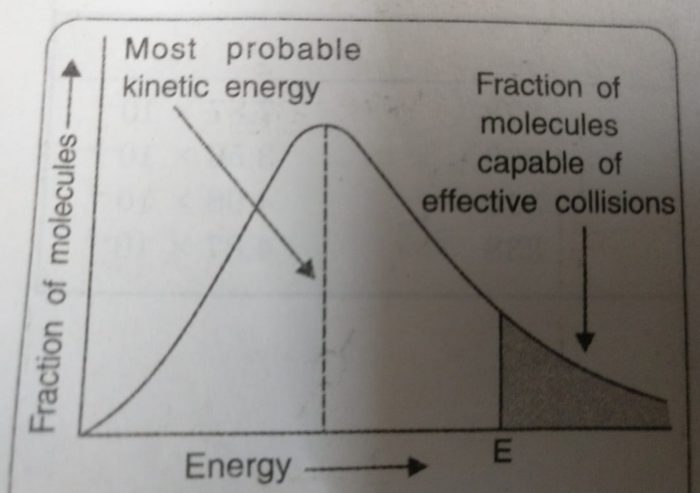 1) The fraction of molecules having very low or very high energies is very small.

4) For reactions having low values of E, there will be larger fraction of colliding molecules which produce effective collisions and hence, rate of the reaction will be high.

Effect of increase in temperature on the number of effective collisions 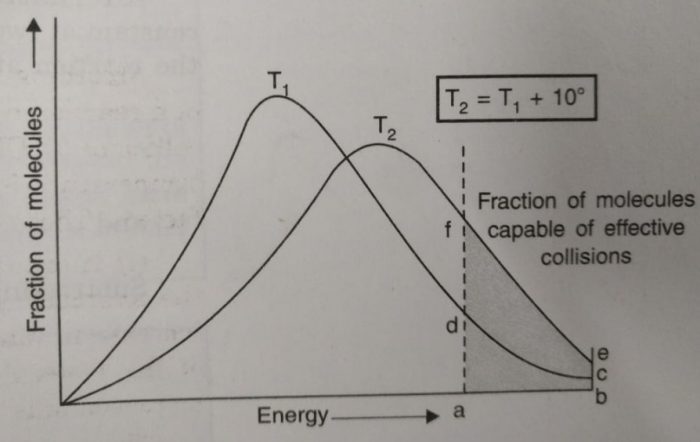 b) The curve at higher temperature is flatter than that at lower temperature which also indicates that the number of molecules with higher energy content have increased.

Increase in the rate of reaction with the rise in temperature is mainly due to the increase in number of effective collisions.