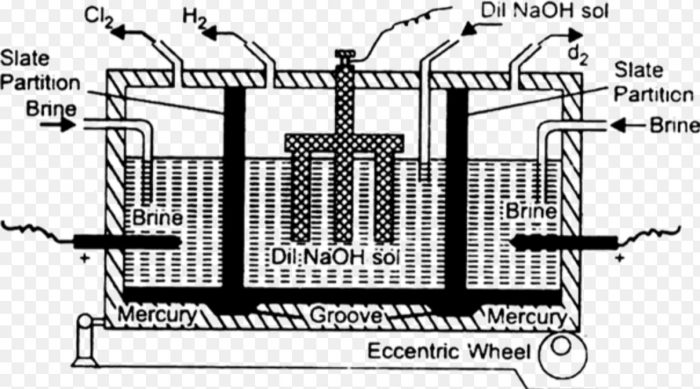 1) It consists of a large rectangular iron tank divided into three compartments by Slate partitions which do not bottom of the tank. They are suspended in mercury placed on the base of the tank.

Water being a weak electrolyte ionizes only slightly:

Cl‾ and OH‾ ions migrate towards the graphite anode while Na+ and H+ ions are attracted by the mercury cathode.

Since the discharge potential of Cl‾ ions is lower than that of OH‾ ions, so Cl‾ ions are discharged at anode and Cl2 evolved passes out through the outlets provided in the outer compartments while OH‾ ions remain in the solution.

Since the discharge potential of Na+ ions is lower than that of H+ ions on the mercury, cathode , so Na+ ions are discharged while H+ ions remain in the solution.

Sodium amalgam thus formed travels to the central compartment due to the rocking motion given to the cell by the eccentric wheel.

Sodium Hydroxide being a strong electrolyte ,undergoes complete dissociation while H2O being a weak electrolyte ionizes only slightly.

H+ and Na+ ions migrate towards the cathode while OH‾ ions travel towards the mercury anode.

At the cathode, since the discharge potential of H+ ions is lower that of Na+ ions , H+ ions are discharged at the cathode and H2 thus liberated goes out through the outlet provided in the central compartment.

OH‾ ions are attracted towards the mercury anode road and after getting discharged ,combine with Na atoms present in sodium amalgam to form NaOH.

Since H+ ions are continuously being discharged at the cathode, the equilibrium gets shifted towards right thereby producing more and more OH‾ ions.The OH‾ ions get discharged at the anode dissolving more and more Na from sodium amalgam thereby forming more ad more NaOH. When the concentration of the NaOH solution increases to about 20% , it is withdrawn, evaporated, fused and finally cast into sticks.

2) It is highly soluble in water to give a strong alkaline solution which is bitter in taste , corrosive and soapy to touch.

3) Crystals of NaOH are deliquescent.

4) The sodium hydroxide solution formed at the surface reacts with atmospheric CO2 to form crystals of sodium carbonate.

1) It is used in the manufacture of soap, paper, rayon etc.

2) It is used in petroleum refining and in the purification of bauxite.

3) It is used in textile industry for mercerising cotton fabrics.

5) It is used in the manufacture of dyes and many other chemicals.

6) It is used as a laboratory reagent.