Question 2 Which subatomic particle was not present in Thomson’s model of an atom?

Question 3 Why Thomson’s model is called as Plum pudding model of an atom?

Structure of an Atom

But the discovery of subatomic particles inside an atom disproved this postulate of Dalton atomic theory.

After the discovery of these subatomic particles,it became necessary to find out how these particles are arranged inside the atoms.

J.J. Thomson was the first scientist to propose a model for structure of an atom. 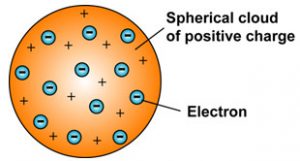 Thomson Model of an atom

When J.J. Thomson proposed his model of the atom in 1903,then only electrons and protons were known to be present in the atom.

According to Thomson Model of an atom :

1) An atom consist of a sphere of positive charge with negatively charged electrons embedded in it.