Question 1 What is a longitudinal wave?

Question 2 What type of wave are illustrated by the movement of rope whose one end is fixed to a pole and the other end is moved up and down?

The waves which travel along a spring when it is pushed and pulled at one end are longitudinal wave.

When a wave travels along the spring,then each turn of the spring moves back and forth by only a small distance in the direction of waves.Since the particles of the medium(turns of spring) are moving back and froth in direction of the wave,the wave which travel across spring are longitudinal waves.

In longitudinal waves compression have greater density whereas rarefaction has less density.

A longitudinal wave in air is represented graphically by plotting density of air against distance from source. 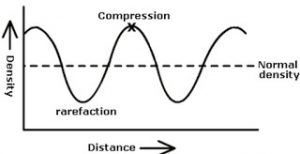