Question 1 Describe how carbon is cycled in the environment?

(4) The endoskeleton and exoskeleton of various animals are also formed from carbonate salts. 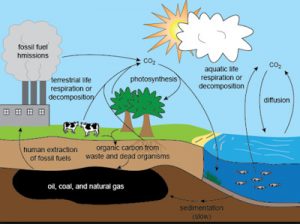 (1) The photosynthetic plants of forest and ocean, chemosynthetic bacteria uses sunlight in the presence of chlorophyll to trap carbon into sugar(fats and sugars).The trapped carbon comes from carbon dioxide in the atmosphere.

(2) The photosynthesis convert carbon dioxide from atmosphere or dissolved in water into glucose. These glucose molecules are either converted into other substances or used to provide energy for synthesis of other biologically important molecules.

(3) Then by respiration, both consumers and producers return carbon dioxide to atmosphere.

(5) The plants and animals decompose for millions of years to form fossil fuel.