Question 1 What name is given to speed in specified motion?

Question 3 What is the S.I. unit of velocity?

Question 4 What is the difference between velocity and speed?

Question 5 When a body said to have uniform motion?

Question 6 How the velocity of a body can be changed?

Question 7 When a body said to have non-uniform motion?

Velocity
Velocity of a body is the distance travelled by it per unit time in a given direction. 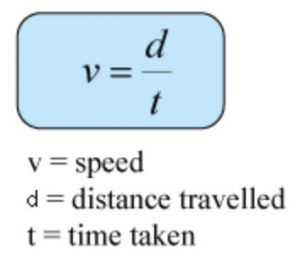 Distance travelled in a given direction is called as displacement.
S.I. unit of velocity is m/s or km/hr.
Velocity is a vector quantity.

For Example :25km/hr towards north.

Uniform velocity
A body has a uniform velocity if it travels in a specified direction in a straight line and moves over equal distances in equal interval of time,no matter how small these intervals may be.
Velocity of a body can be changed in 2 ways:
1) By changing speed
2) By changing direction

Non-uniform velocity
When a body does not cover equal distances in equal interval of time,the velocity is said to be non-uniform.
For Ex:car moving on circular road with constant speed.
Speed and velocity are equal in magnitude if body moves in a single line.