You are here: Home / Class 9 / Motion / Equation of Motion by Graphical Method

Question 1 What is meant by uniform circular motion?

Question 2 A body goes around the sun with constant speed in a circular orbit. Is the motion uniform or accelerated?

Question 3 A satellite goes around the earth in a circular orbit with constant speed. Is the motion uniform or accelerated?

Question 4 Give examples of circular motion?

Question 5 What is a centripetal force. Give example?

When a body moves in a circle, it is called circular motion.

When a body moves along a circular path, then its direction of motion keeps on changing continuously.

A stone tied to a thread is rotated in circular path with uniform speed in clockwise direction.

Since there is change in direction of speed, the velocity is not uniform.
The motion in a circle with constant speed is an example of accelerated motion.
The force which is needed to make an object travel in circular path is called centripetal force.

(1) Movement of artificial satellite around earth .
(2) Motion of moon around earth.
(3) Motion of earth around sun.
(4) Tip of seconds hand of a watch.
(5) Athlete moving on a circular path.

The speed of a body moving along a circular path is given by:

Equation of Motion by Graphical Method 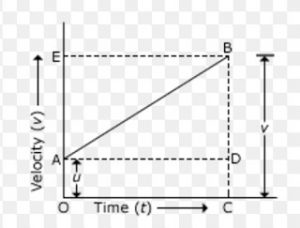 Initial velocity u at A =OA
Velocity changes from A To B in time t(uniform acceleration a)
Final Velocity v=BC
BC=BD+DC
v=BD+AO
v=BD+u
Slope of velocity time graph is equal to acceleration a.
a= BD
a=BD/AD
a=BD/t
BD = at
v=u+at