Home » Class 9 » Is matter around us pure » Separation of Mixture

Question 1 What do you mean by separation of mixtures?

Question 2 How will you separate a mixture containing sand and sugar?

Question 3 Describe a method to separate a mixture of sand and salt?

Question 4 How will you separate a mixture of salt and sugar?

Question 5 Name a solvent used to separate a mixture of sulphur and carbon?

Question 6 How will you separate a mixture of sodium chloride and sand?

Question 7 How will you separate iodine from a mixture of iodine and common salts?

Question 8 Describe a method to separate a mixture of camphor and sand?

Question 9 Which method is used to separate naphthalene and common salt?

Question 10 How do you separate a mixture of iron filling and powdered carbon?

Question 11 How will you separate a mixture of iron filling and sulphur powder without using carbon disulphide?

Question 12 How will you separate iron pins from sand?

Question 13 Name any two solid substances whose mixture can be separated by sublimation?

Question 14 How is scrap iron separated from a heap of waste material in factories?

Question 15 How will you separate a mixture of chalk powder and water?

Question 16 Name the process which can be used to separate a mixture of salt solution and sand?

Question 17 Name the process which can be used to recover salt from an aqueous salt solution?

Question 18 Name the substances whose mixture can be separated completely by distillation?

Question 19 Name the process which is used in milk dairies to separate cream from milk?

Question 20 Explain the process of centrifugation?

Question 21 Explain how,impure copper sulphate can be purified by crystallisation?

Question 22 What is chromatography?

Question 23 Give few application of chromatography?

Question 24 Name the process by which all the dyes can be recovered from black ink?

Question 25 Name the process you would use to separate a mixture of water and alcohol?

Question 26 Name the apparatus you would use to separate oil from water?

Question 27 How will you separate a mixture of acetone and water?

Question 28 What is fractional distillation?

Question 29 Name few substances whose mixture can be separated by fractional distillation?

Question 30 How will you separate water from mustard oil?

Question 31 Name the process by which various gases can be separated?

The various physical processes which are used to separate the constituents of mixture are: sublimation,separation by magnet, filtration, centrifugation, evaporation, crystallisation, chromatography, distillation, fractional distillation, separating funnel. The separation of mixtures, we consider three cases:

(2) Mixture of solid and liquid

All the mixtures containing two solid substances can be separated by :

The mixture of salt and sand is taken in a beaker and water is added to it.The mixture is stirred to dissolve the salt in water.The sand remains undissolved. 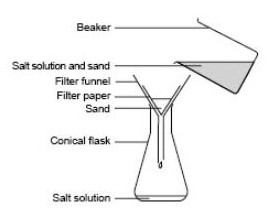 Mixture of sand and salt

(3) A mixture of sugar and salt
Both sugar and salt are soluble in water,so water cannot be used as a solvent to separate them.However sugar is soluble in alcohol whereas salt is insoluble.

By Sublimation
The changing of a solid state directly into vapours on heating and vapours into solid on cooling is called sublimation.

The solid substance which undergoes sublimation is called as sublime.

The solid substance obtained on cooling the vapours is called sublimate.

The process of sublimation is used to separate those substances from a mixture which sublime oh heating.

The substances like ammonium chloride, iodine, camphor, naphthalene, anthracene sublime on heating and can be recovered in the form of a sublimate by cooling their vapours.

Most of the solid substances do not undergo sublimation.

The process of sublimation is used to separate that component of a solid-solid mixture which sublimes on heating. 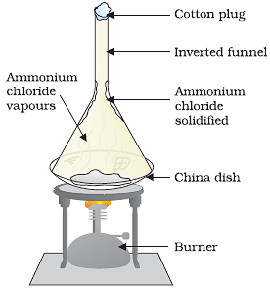 If a mixture contains iron as one of the constituent, it can be separated by using magnet.

In order to separate iron filing from sulphur powder, a horse-shoe magnet is moved over the surface of the mixture. The iron filings are attracted by the magnet, they cling to the poles of the magnet and get separated. 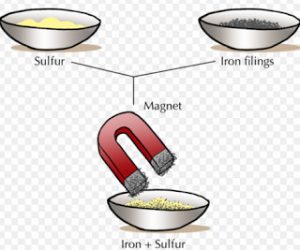 Mixture Of Solid and liquid

The process of removing insoluble solids from a liquid using a filter paper is called filtration.

It is used for separating insoluble substances from a liquid.

For Example: A mixture of chalk and water, sand and water etc.

A heterogeneous mixture of a solid and a liquid can be separated by the process of filtration. 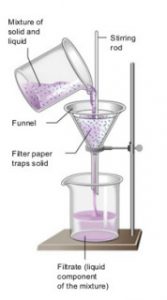 Mixture of water and sand

Centrifugation is a method of separating the suspended particles of a substance from a liquid in which the mixture is rotated at a high speed in a centrifuge.

Centrifugation is done by using a machine called centrifugate.

In the method of centrifugation ,the mixture of fine suspended particles in a liquid is taken a test tube. The test tube is placed in a centrifuge machine and rotated rapidly for some time. As the mixture rotates rapidly, a force acts on the heavier suspended particles in it and brings them down o the bottom of the test tube. The clear liquid, being lighter, remains on the top.

We can separate the clay particles suspended in water very rapidly by centrifugation.

Milk is a suspension of tiny droplets of oil in a watery liquid. The process of centrifugation is used in dairies to separate cream from milk. The milk is put in a closed container in big centrifuge machine. When the centrifuge machine is switched on, the milk is rotated at a very high speed in its container. Due to this,the milk separates into cream and skimmed milk.

The process of centrifugation is also used in washing machines to squeeze out water from wet clothes and make them dry. 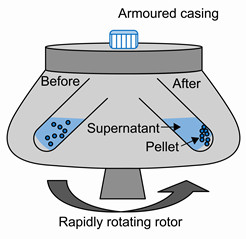 Evaporation is used to separate a solid substance that has dissolved in water.

The dissolved substance is left as a residue when all the water has evaporated.

For Example : (1) Separation of common salt and water.

The process of evaporation is used on a large scale to obtain common salt from sea water.

Evaporation is used for recovering dissolved solid substances from liquid mixtures but the liquid itself cannot be recovered by this method. 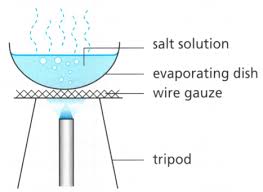 The process of cooling a hot, concentrated solution of a substance to obtain crystals is called crystallisation.

It is used for obtaining a pure solid substance from impur sample.

(2) The solution is filtered to remove insoluble impurities.

(6) Separate the crystals of pure solid by filtration and dry.

For Example :Impure copper sulphate can be purified by the method of crystallisation.

It is a technique of separating two or more dissolved solids which are present in a solution in very small quantities.

By paper chromatography two or more different substances present in a same solution can be separated. Two or more substances are soluble in same solvent but their solubilities may be different .

For Example :Black ink is a mixture of several coloured substances which can be separated by this method.

(1) Take a thin strip of filter paper. Draw a pencil line on it, about 3 cm from one end.

(2) Put a small drop of black ink on filter paper strip at the centre of the pencil line. Let the ink dry.

(3) When the drop of ink has dried, the filter paper strip is lowered into a tall glass jar containing some water in its lower part.The filter paper is held vertically by attaching its upper end to a glass rod with cello tape. The lower end of paper strip should dip in water but pencil line should remain above the water level in the jar.

(4) The water gradually rises up the filter paper strip by capillary action.As water moves up the paper strip,it takes along the dyes present in ink.The dye which is more soluble in water dissolves first,rises faster and produces a coloured spot on the paper at a higher position. The less soluble dyes dissolve a little later, rise slower and form coloured spots at lower heights. In this way all the dyes present in black ink get separated.

(5) When the water reaches near the top end of the filter paper strip, the paper strip is removed from the jar and dried. The paper with its separate coloured spots is a called a chromatogram.

(6) The chromatogram obtained by using black ink in this experiment has three coloured spots on it. This means that given sample of black ink has three different dyes mixed in it. 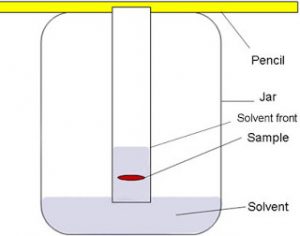 (1) It is used to separate solution of coloured substances.

(2) It is used in forensic sciences to detect and identify trace amount of substances in the contents of bladder and stomach.

(3) It is used to separate small amount of products of chemical reaction.

(4) It is used to separate pigments from natural colours.

It is a process of heating a liquid to form vapours,and then cooling the vapours tho get back the liquid. The liquid obtained by condensing the vapour is called distillate.In order to obtain both solid as well as liquid from the mixture, the process of distillation is used. When a homogeneous mixture of solid and liquid is heated in a closed distillation flask.the liquid being volatile form vapours. The vapours are the passed through condenser where they get cooled and condensed to form pure liquid. The pure liquid is collected is collected in a separate vessel. The solid being non volatile remains behind.
For Example: NaCl+water
Pure water or distilled water is made from tap water by the process of distillation. It is used to separate two miscible liquid having different boiling point. The liquid having lower boiling point distils over first and the liquid having higher boiling point distills later.

Separation of two or more liquids

Those liquids which mix together in all proportion and form a single layer are called miscible liquids.

For Example : Alcohol and water, Water and acetone etc.

Those liquids which do not mix with each other and form separate layer are called immiscible liquids.

For Example: Oil and water, Petrol and water etc.

A mixture of immiscible liquids is separated by using an apparatus called separating funnel.

Fractional distillation is the process of separating two or more miscible liquids by distillation,The distillate being collected in fractions boiling at different temperatures.

The separation of two liquids by fractional distillation depends on the differences in their boiling points. 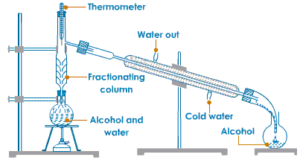 For Example :Alcohol and water are miscible liquids.

Acetone and Water : The boiling point of acetone is 56°C whereas that of water is 100°C.So acetone will distil first and then water.

(3) It is used to separate gases of the air. 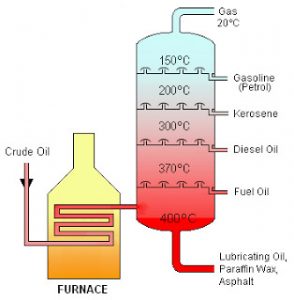 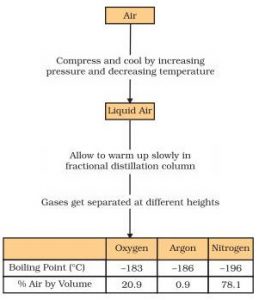 The mixture of two immiscible liquids is put in a separating funnel and allowed to stand for sometime.the mixture separates into two layers according to the densities of the liquid in it.The heavier or denser liquid forms the lower layer whereas the lighter liquid forms the upper layer.On opening the stop cock of separating funnel,the lower layer of heavier liquid comes out first and collected in a beaker.When the lower layer of heavier liquid is completely run off,the stop cock is closed.The lighter liquid in the upper layer is collected in a separate beaker by opening the stop cock again.

For Example: water and kerosene, petrol and water, oil and water, benzene and ether etc. can be separated by using separating funnel. 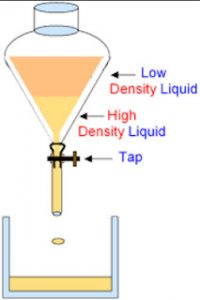 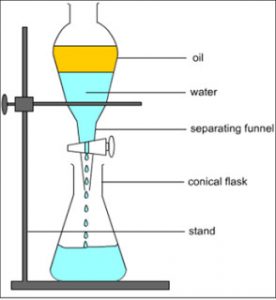