You are here: Home / Class 9 / Atoms and Molecules / Ions

Question 1 What are ions?

Question 2 How an ion is formed?

Question 3 How a cation is formed. Give example?

Question 4 How an anion is formed. Give example?

Question 5 What are simple ions. Give example?

Question 6 What are complex ions. Give example?

Question 7 What are ionic compounds?

Neutron has no charge.

Atom contains an equal number of negative and positive charge which make it stable.

(1) If an atom has less electrons than normal, then it gets positive charge.

(2) If an atom has more electrons than normal, then it gets negative charge.

An ion is a positively or negatively charged atom or group or atom. 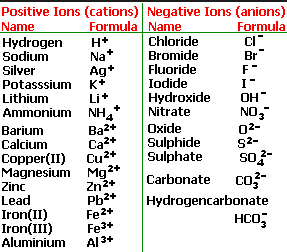 There are two types of Ions

A positively charged ion is known as cation. A cation is formed by loss of one or more electrons by an atom.

A cation is formed by removal of electrons from an atom therefore a cation contains less electrons than normal atom.

Due to more protons than electrons, a cation has positive charge on it.

(a) If an atom loses 1 electron, then the cation formed has 1 unit of positive charge.

(b) If an atom loses 2 electron, then the cation formed has 2 unit of positive charge.

(c) If an atom loses 3 electron, then the cation formed has 3 unit of positive charge.

A negatively charged ion is known as anion. An anion is formed by the gain of one or more electrons by an atom.

An anion is formed by the gain of one or more electrons by an atom.

since an anion is formed by the addition of electron to an atom, therefore an anion contains more electrons than normal.

Due to more electrons than protons, an anion has a negative charge in it.

(a) If an atom gains 1 electron, then the anion formed has 1 unit of negative charge.

(b) If an atom gains 2 electrons, then the anion formed has 2 units of negative charge.

(c) If an atom gains 3 electron, then the anion formed has 3 units of negative charge.

Those ions which are formed from single atoms are called simple ions. They are also called as monoatomic ions.

Those ions which are formed from groups of joined atoms are called as polyatomic ions.

The compounds which are made up of ions are called as ionic compounds.

The forces which hold them together are called as ionic bonds or electrovalent bonds.

For Example: Sodium Chloride(NaCl) is an ionic compound made up of equal number of positively charged sodium ion and negatively charged chloride ion. 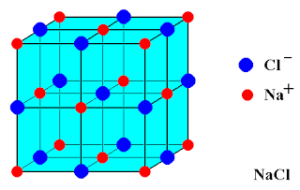 The simple combination of ions that produces an electrically neutral unit, is called a formula unit of the ionic compound.

The formula mass of an ionic compound is the relative mass of its formula unit as compared with the mass of a carbon-12 atom taken as 12 units.

Formula mass is the sum of atomic masses of the atoms or ions represented by its formula.