Question 1 Draw a neat and labelled diagram of human ear?

Question 3 Name the organ of hearing in human being?

Question 4 Name that part of ear which vibrates when outside sound falls on it?

Question 5 Name the three tiny bones present in the middle part of ear?

Question 6 What is the function of three tiny bones in the ear?

Question 7 Name the nerve which carries electrical impulses from cochlea of ear to the brain?

Question 8 What is the name of passage in outer ear which carries sound waves to the eardrum?

Question 9 What is the function of cochlea in human ear? 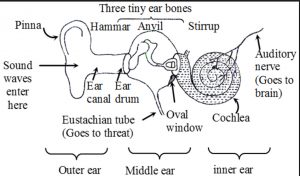 The ear are the sense organs which help us in hearing sound.

So ,we hear through our ears.

2)At the end of ear canal a thin, elastic and circular membrane called a eardrum is stretched tightly.

3There are three small and delicate bones called hammer, anvil and stirrup in the middle part of the ear which are linked to one another.

4)One end of hammer touches the eardrum and its other end is connected to second bone anvil.

5)The other end of anvil is connected to third bone called stirrup. And the free end of stirrup touches the membrane over the oval window.

6)The inner part of ear has a coiled tube called cochlea.One end of cochlea is connected to the middle part of ear through the elastic membrane over the oval window. Cochlea is filled with liquid. The liquid present in cochlea contains nerve cells which are sensitive to sound. The other end of cochlea is connected to auditory nerve which goes into the brain. The three tiny bones in the middle part of ear act as a system of levers and amplify sound vibrations coming from the eardrum before passing them on to the inner part of the ear.

The sound waves are collected by the pinna of outer part of ear.

These sound waves pass through the ear canal and fall on the ear drum.

When the sound waves fall on the eardrum , the eardrum starts vibrating back and forth rapidly. The vibrating eardrum causes a small bone hammer to vibrate.

From Hammer vibrations are passed on to the second bone anvil and then to the third bone stirrup.

The vibrating stirrup strikes on the membrane of oval window and passes the amplified vibrations to the liquid cochlea. Due to this ,liquid in cochlea begins to vibrate.

The vibrating liquid of cochlea sets up electrical impulses in the nerve cells present in it.

We should not put anything inside ear because they can tear eardrum.The tearing of a eardrum can make a person deaf.Our ears are very delicate organs.