Question 1 How is lightning produced between clouds in the sky?

Question 3 How does a lightning conductor protects a tall building?

Question 4 Why are lightning strikes more frequent in hilly areas?

Question 5 Name the materials of which a lightning conductor is made?

Question 6 What is a lightning conductor?

Question 7 Suggest few measure to protects ourselves from lightning?

Question 8 Why it is dangerous to raise an umbrella over our head in a thunderstorm?

Question 9 Why should a person not stand under a tree during a thunderstorm?

Question 11  Why we hear a crackling sound when we take off woollen or synthetic clothes (like polyester or nylon clothes)?

Many times we see a flash of light in the clouds in the sky which is followed by a loud sound called thunder. The bright flash of light which we see in the clouds is called lightning. Lightning is an electric discharge in the atmosphere between oppositely charged clouds (or between charged cloud and the earth). Lightning is produced by the electric charges in the sky.

A cloud is a visible mass of condensed water vapours floating in the atmosphere, high above the ground. A heavy, dark, rain cloud is called storm cloud. When a storm cloud develops in the sky, strong winds move upwards through the cloud and make the water drops present in the cloud to rub against one another. This rubbing together of water drops produce extremely large electric charges in the cloud due to friction.

Lightning usually occurs within a cloud in the sky. It is called sheet lightning. Lightning also occurs between a cloud and the earth (or tall objects of the earth). It is then called fork lightning.

Thus, lightning strikes the earth or its tall structures when electric charges flow between the cloud and the earth through a tall building, a tree or any other object. Lightning strikes are more frequent in the hilly areas because in such areas clouds are

comparatively closer to the ground than in the planes. In the planes, lightning usually strikes strikes tall structures like tall buildings, factory chimneys, radio and TV transmission towers or big trees. This is because all these tall objects are closer to the charged clouds than the ground.

When we take off woollen or synthetic clothes (like polyester or nylon clothes), sometimes we hear crackling sound. And if it is dark (as during night), we can even see tiny sparks. When we take off a woollen (or synthetic) sweater, it rubs against our shirt. The rubbing together of sweater and shirt produces opposite electric charges on them. The discharge of these electric charges produces tiny sparks of light as well as crackling sound.

We also see sparks on an electric pole when the naked electric wire fixed on the tall poles become loose and touch one another. Such sparks are quite common when a strong wind is blowing and shaking the over-head electric wires too much. We also see electric sparks in our home when a plug is loose in its socket and a current is switched on.

When the person is hit by lightning during a thunderstorm, then the electric energy passes through the body of the person due to which the person gets severe burns and gets killed.

The damage caused to buildings and other tall structures by lightning can be prevented by installing lightning conductors on them. 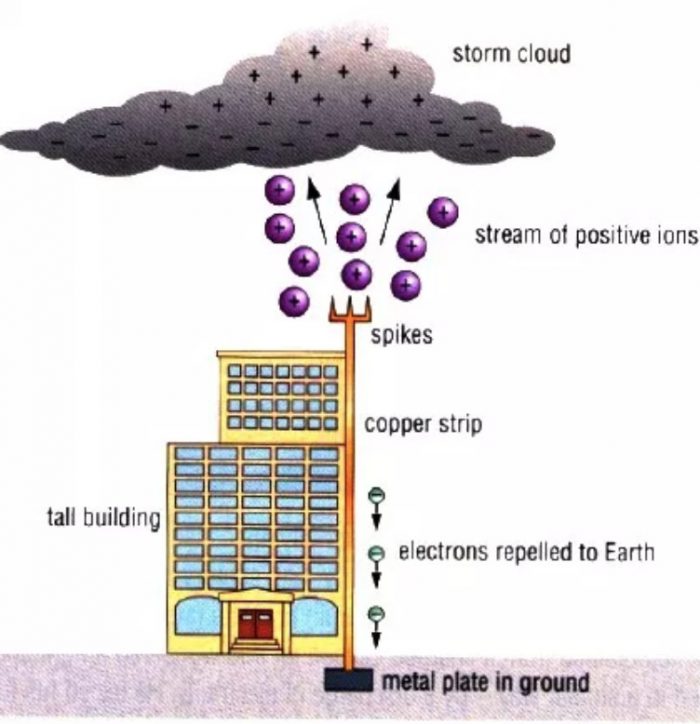 If lightning strikes, it will hit the top of the lightning conductor rather than the building. The electric energy of lightning passes through the metal strip and gets discharged safely into the ground through the buried metal plate.

Measures to Protect Ourselves from Lightning

(3) If the person is in open space when thunderstorm and lightning begin, and there is no suitable shelter available nearby, then the following precautions should be taken for protection from lightning:

(a) When in open space, a person should never stand under a tree to take shelter during thunderstorm because there is danger of lightning striking the tree and burning it up. This lightning can also pass through the body of the person standing under the tree and kill him. If, however, a person is in a forest, he should take shelter under a short tree because a short tree is less likely to be hit by lightning. On the other hand, a tall tree (being nearer to the thunderclouds) is more likely to be hit by lightning.

(4) We should avoid raising an umbrella over head during lightning. This is because lightning may strike the top end of the metal rod of umbrella and harm us.

(5) The TV antennas and dish antennas fixed on tall buildings are especially prone to lightning strikes. We should, therefore, switch off sets during frequent lightning otherwise TV sets may get burnt.

(6) Lightning can strike metal pipes (such as water pipes) fixed in buildings. So, during a thunderstorm when lightning is taking place, we should avoid touching the metal pipes fixed in a house or building.