Question 1 What are the two kinds of electric charges?

Question 2 Why does a plastic comb rubbed with dry hair attract tiny pieces of paper?

Question 3 What is lightning?

Question 6 How will you charge a glass rod by the method of friction?

Question 7 How will you charge an inflated rubber balloon by the method of friction?

Question 8 How will you charge a ball point pen by the method of friction?

Question 9 Explain why a charged body loses its charge when we touch it with our touch?

Question 10 A glass rod is rubbed with a silk cloth? What type of charge is acquired by silk cloth and glass rod?

Question 12 What are static charges?

Question 14 What is meant by charging the object?

Question 15 Give an activity to show that like charges repel each other?

Question 16 Give an activity to show that unlike charges attract each other? 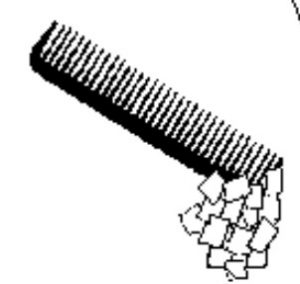 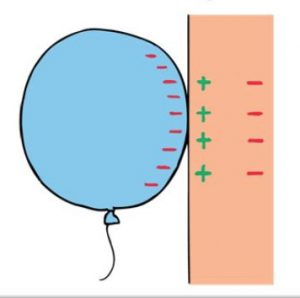 An object having no electric charge on it is called an uncharged object.

An object having electric charge on it is called a charged object.

Reason: The glass rod is electrically neutral or uncharged (having no electric charge), so it has no effect on the tiny pieces of paper. But when the glass rod is rubbed with silk cloth,

then it gets electric charge. The electrically charged glass rod exerts a force on the tiny pieces of paper and hence attracts them.

A glass rod rubbed with silk acquires the ability to attract small, uncharged pieces of paper.

The process of giving electric charge to an object is called charging the object.

Charging an Object by Rubbing (or Friction)

The charging of an object by rubbing it with another object is called charging by friction.

(1) The charging of a glass rod by rubbing it with a silk cloth.

(2) When a plastic comb is rubbed with dry hair, the plastic comb acquires an electric charge due to friction. 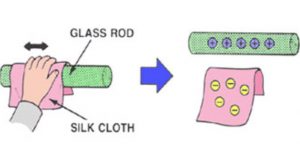 (3) When a ball point pen refill is rubbed vigorously with a piece of polythene, the refill acquires electric charge by friction. The charged refill can attract tiny pieces of paper kept near it.

(4) When an inflated rubber balloon is rubbed with a piece of woollen cloth, it gets charged due to friction.

These electric charges remain bound on the surface of the charged object They do not move by themselves.

All the insulator objects (like glass rod, plastic comb, plastic scale, plastic straw, ball pen refill and rubber ballon, etc.) can be charged by rubbing while held in hand. This is because being insulators , they do not conduct electric charges produced on their surface through our hand and body into the earth.

Friction Charges Both the Objects Which are Rubbed Together

When two objects are rubbed together, then both the objects get charged by friction (but with opposite charges). For example

3) When we rub a plastic comb in dry hair, then both, the comb and hair get charged but with opposite charges. The plastic comb gets negative charge whereas the hair get positive charge. Again when we rub an inflated rubber balloon with a piece of woollen cloth, then both, the balloon as well as woollen cloth get electrically charged but with opposite charges. The rubber balloon gets negative electric charge whereas the woollen cloth acquires positive electric charge.

Whether an object will lose electrons during rubbing depends on the nature of material of the object.

Types of Electric Charges and their Interactions 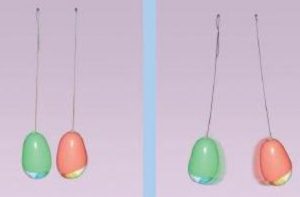 Depending on the nature of their electric charges, two charged objects may attract or repel each other