You are here: Home / Class 8 / Some Natural Phenomena / Earthquake

Question 1 What is an earthquake?

Question 2 Define the term epicentre and focus of an earthquake?

Question 3 What are the main situations in which earthquake occurs?

Question 4 What are the various effects of an earthquake?

Question 6 What is a seismograph?

Question 7 What precautions should be taken by people living in seismic zone for protection against earthquakes?

Question 8 What precautions would you take to protect yourself during an earthquake if you are inside the house?

Question 9 What precautions would you take to protect yourself during an earthquake if you are outside the house?

Question 10 What happens when two moving plates of earth’s crust collide head on with each other?

Question 11 What happens when the two plates of earth’s crust moving in opposite directions slide past one another?

Question 12 What is the function of Richter scale?

Question 14 Explain the Working of seismograph

An earthquake is a sudden shaking (or trembling) of the earth which lasts for a very short time.

An earthquake is caused by the violent movements of rocks deep inside the earth’s crust.

A major earthquake occurred in India on 26th January 2001 in Bhuj district of  Gujarat.

Another major earthquake occurred on 8th October 2005 in Uri and Tangdhar towns of North Kashmir.

A great loss of human life and property occurred in both these earthquakes.

A major tsunami (caused by an earthquake) occurred in the Indian Ocean on 26th December 2004. All the coastal areas around the Indian Ocean suffered huge loss of life and property during this tsunami.

The other destructive natural phenomena such as cyclones and lightning can be predicted in advance to some extent so that we get some time to take measures to protect ourselves and minimise the damage to life and property. This is not so in the case of earthquakes.

Earthquake is a destructive natural phenomenon which cannot be predicted in advance. Nobody can tell when and where an earthquake will occur. This unpredictable nature of

earthquakes makes them even more dangerous. In order to understand why earthquakes occur, we should first understand the inner structure of the earth.

The inside of earth is made up of three main layers : Core, Mantle and Crust. 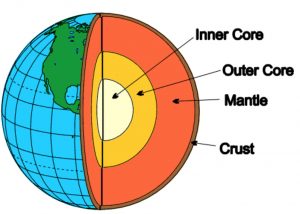 The central region of earth (between the core and crust) is called mantle. Mantle is the middle layer of the earth. Mantle is mostly made of dense, solid rocks. Some of the mantle is a mixture of solid rocks and hot molten rocks (liquid rocks) like the lava from a volcano. Heat coming from the core of earth warms the mantle. This heating sets up huge convection currents in the mantle. The giant convection currents occurring in the mantle can make the mantle move very, very slowly.

The earthquakes occur when the moving plates of the earth’s crust :

(1) The plates of earth’s crust are made up of huge rocks having rough edges. Due to their highly rough edges, the movement of two crust plates relative to one another is not smooth. When the two huge plates of earth’s crust slide past one another, they rub against one another ferociously and the rocks on their edges get entangled. Due to entanglement of the rocks at their edges, the two crust plates stop moving for some time. During this time, the plates are still pushing against one another and trying to move but they are not moving.

When the entangles rocks of the two crust plates break open suddenly with a big jolt, the earthquake occurs releasing a tremendous amount of energy.

This sudden release of tremendous amount of energy produces shock waves (or seismic waves) which make the earth shake. After the earthquake, the plates of earth’s crust start moving again and continue to move until they get entangled again.

(2) When the two plates of the earth’s crust moving in opposite directions collide with each other head on, then the ends of these crust plates buckle and fold forming new mountains and causing earthquakes. A  tremendous amount of energy is released when the two huge plates of the earth’s crust collide with each other. This tremendous amount of energy sends shock waves (called seismic waves) throughout the earth. When these shock waves reach the surface of earth, the ground starts shaking violently. This shaking of the ground is felt as an earthquake.

The weak zones of earth’s crust (which are more prone to earthquakes) are called seismic zones’ or fault zones.

Major earthquakes occur in the well defined ‘seismic zones’ called earthquake belts. The seismic zones mark the edges of the huge mobile pieces of the earth’s crust called plates. . In India, the areas most threatened by earthquakes are Kashmir, Western and Central Himalayas, the whole of North-East, Rann of Kutch, Rajasthan and Indo-Gangetic Plane. Some areas of South India also fall in earthquake danger zone.

Earthquake tremors produce shock waves (called seismic waves). The shock waves travel in all directions through the Earth and also reach the surface of the earth.

Seismograph is an instrument which measures and records the magnitude of an earthquake in terms of the shock waves it produces.

The purpose of using a freely suspended heavy weight is that, being heavy, it has a lot of inertia and hence it remains stationary during an earthquake when the rest of seismograph (including its support) fixed to the earth shakes (or vibrates) during an earthquake.

When an earthquake occurs, the earth starts shaking due to which the base of seismograph fixed to the earth also starts shaking. But the freely suspended heavy weight (and the pen attached to it) do not shake during the earthquake, they remain stationary. Since the graph paper on the rotating drum shakes with the shaking earth, the pen attached to suspended weight records the vibrations produced by earthquake on the graph paper which moves under it. The pen traces the relative movement between the shaking earth and the stationary, suspended heavy weight. This trace on the graph paper records the earthquake. The seismograph record is also known as seismogram.

A seismograph record (or seismogram) shows seismic waves or earthquake waves recorded on a graph paper by a seismograph. It also shows the duration (or time) for which the earthquake lasts, in seconds.

By studying the seismograph records of an earthquake produced at various seismic stations, scientists can construct a complete map of an earthquake giving its focus, epicentre, magnitude and duration.

The seismic waves spread from the focus and travel through the earth in all directions.

Focus is actually source of an earthquake. The point on earth’s surface directly above the focus is called epicentre.

Both, Bhuj and Kashmir earthquakes had magnitudes greater than 7.5 on the Richter Scale. The earthquakes which measure 8.5 or more on Richter Scale are devastating. During these earthquakes, the affected part of earth’s surface shakes violently. Such earthquakes can destroy entire cities and villages causing a great loss of life and property.

Earthquakes are highly destructive and they cannot be predicted. So, it is necessary that we take precautions to protect ourselves all the time.

Some of the important precautions which can be taken by the people living in seismic zones for protection against earthquakes are as follows:

(i) All the houses and other buildings in seismic zones should be designed and constructed in such a way that they can withstand major earthquake tremors.

(ii) In highly seismic areas, the use of mud and timber (wood) for building houses is better than using heavy construction materials. The roofs of houses in such areas should be kept as light as possible so that a roof falls during an earthquake, the damage will not be too much.

(iii) The cupboards and shelves should be fixed to the walls so that they do not fall easily when shaking occurs during an earthquake. Glass bottles should not be placed on high shelves and heavy objects should be placed low to the ground.

(iv) The objects such as heavy mirrors, photo frames, wall clocks and water-heaters, etc, should be mounted securely on the walls at such places in the house that they do not fall on the people in the house in the event of an earthquake.

(v) All buildings (especially tall buildings) should have fire-fighting equipment in working order.

In case an earthquake occurs, we should take the following precautions to protect ourselves depending on whether we are at home or outdoors at that moment.

If we are at home when an earthquake occurs, then:

(1) We should take shelter under a sturdy table or a kitchen counter and stay there till the shaking due to earthquake stops. We should cover our head with hands.

(2) We should stay away from tall and heavy objects (like steel almirahs, cabinets, book racks and refrigerators), so that if they topple , they may not fall on us.

(3) We should also stay away from glass windows that may shelter due to vibrations.

(4) If we are in bed, we should just move on the bed to be close to a wall but not get up from the bed. We should protect our head with a pillow.

If we are outdoors when an earthquake occurs, then:

(1) We should stay at a clear spot away from buildings, trees and over-head power lines. We should also sit on the ground.

(2) If we are in a car (or bus), we should not come out of it. The car (or bus) should be driven slowly to a clear spot away from buildings, trees and over-head electric wires.