Question 3 What are the male gametes in human called?

Question 4 What are the female gametes in human called?

Question 5 Which organ of the human body passes sperm from a man to a woman?

Question 6 In which female reproductive organ does the embryo get embedded?

Question 9 What is  foetus?

Question 10 What is an embryo?

Question 11 Where in the human body does an egg get fertilised?

Question 12 Where does a fertilised egg develops into a baby in the human body?

In sexual reproduction in animals, there are 2 parents: male and female.

The two parents have sex organs which produce sex cells or gametes.

(3) The sperm enters into the egg. The nucleus of sperm fuses with the nucleus of egg cell to form a new cell called zygote.

(4) The zygote divides repeatedly to form a hollow ball of hundreds of cells which is called embryo.

(5) Embryo grows and becomes a foetus .

(6) Foetus grows and develops to form a new baby animal. 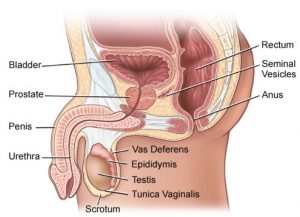 (1) Testes are the oval shaped organs which lie outside the abdominal cavity of a man. A man has 2 testes. They are the real reproductive organs in man.

(3) The testes are enclosed in two small bags of skin called scrotal sacs. Testes work more efficiently at a temperature slightly below the body temperature, so they are held outside the body in the scrotal sacs.

(4) The sperms formed in testes come out and go into a coiled tube called epididymis.

(5) From epididymis the sperms are carried by a long tube called sperm duct into organs called seminal vesicles.

(6) The seminal vesicles join to another tube called urethra coming from the bladder.

(7) Urethra carries the sperm to an organ called penis which opens outside the body. The penis is an organ for introducing sperms into the woman. 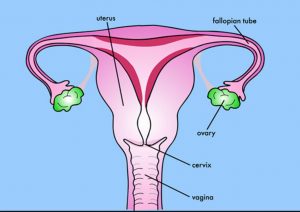 (1) Ovaries: They are the oval shaped organs which are inside the abdominal cavity of a woman. A woman has 2 ovaries. The female sex cells called eggs are made in the ovaries.

(3) One mature egg is released into oviduct every moment by one of the ovaries. The release of an egg from ovary is called as ovulation. The fertilisation of egg by a sperm takes place in the oviduct.

(4) The 2 oviduct connect to a bag like organ called uterus at the other end. The growth and development of a fertilised egg into a baby takes place in the uterus.

(5) The uterus is connected through a narrow opening called cervix to another tube called vagina which opens to the outside of the body. Vagina receives the penis for putting sperms into woman’s body.