You are here: Home / Class 8 / Reproduction in animals / Metamorphosis

Question 1 What is metamorphosis?

Question 2 Give two example of metamorphosis?

Question 3 Name few animals which do not undergo metamorphosis?

Question 4 Name 2 animals which produce embryos that grow into larvae before transformation into adults? 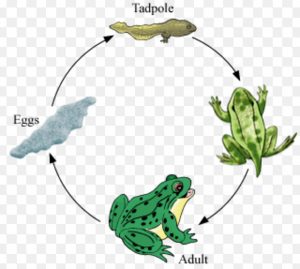 The process of transformation from an immature form of an animal like larva to its adult form in two or more distinct stage is called  metamorphosis.

The change of a larvae to an adult animal is called metamorphosis.It occurs in amphibians and insects(silk moth, butterfly, housefly)

The hatching of a fertilized egg of frog produces a very immature young one called tadpole.The tadpole or larvae of frog develops gradually and undergoes many drastic changes in appearance before it forms an adult frog.The tadpole looks very different from adult frog.

The transformation of larvae into an adult through drastic changes in appearance is called metamorphosis.

A tadpole and the adult frog look very different from each other.The body features which are present in an adult frog are not present in its immature form called tadpole.

1)Tadpole is adapted to live life in water only.

2)Tadpole has a long tail which helps it to swim easily in water.

3)Tadpole breathe through the gills.

4)It eats only tiny water plants and small aqueous animals.

5)The tadpole gradually transforms into an adult frog by losing many old features of its body and developing new body features in many stages.

1)An adult frog is adapted to live life in water as well as on land.

2)The adult frog develops webbed feet which help it to swim and also to hop on land.

4)The frog has a long and forked tongue which can be flicked out to catch insect as food.

5)The eyes in frog move to the top of the head so that the frog can see above the surface of water. 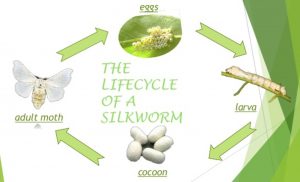 Silk moth is an insect which undergoes metamorphosis during its life cycle.The silk moth passes through the larvae and pupa stages during its development after hatching from the eggs and forms an adult silk moth.

The body parts in adults are similar to those which are present in babies from the time of birth.