Question 1 What is asexual reproduction?

Question 2 How does an amoeba reproduce?

Question 3 How does a hydra reproduce?

Question 6 Name one animal which reproduce by binary fission?

Question 7 Name one animal which reproduce by budding?

Asexual reproduction is the production of a new organism from a single parent without the involvement of sex cells or gametes.

The new organism produced by asexual reproduction is exactly identical to the parents.

The 2 common methods of asexual reproduction are: 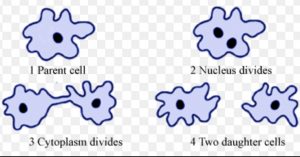 The unicellular organism called amoeba reproduces by the method of binary fission.Amoeba reproduces by binary fission by dividing its body into 2 parts.When the amoeba cell reached its maximum size of growth, then first nucleus of amoeba lengthens and divides into two parts.After that the cytoplasm of Amoeba divides into 2 parts, one part around each nucleus.One parent amoeba divides to form two smaller amoebae(Daughter amoebae).One amoeba produces two amoebae.It takes about an hour to divide into 2 daughter amoebae.The two daughter amoebae produced here grow to their full size by eating food and then divide again to produce four amoebae, and so on.The daughter amoebae produced by the process are identical to the parent amoeba.

Paramecium also reproduces by the binary fission.In multiple fission, parent organism splits to from many new organism at the same time.

In budding, a small part of the body of the parent organism grows out as a bud which then detaches and becomes a new organism.

For Ex:Hydra, sea-anemones, sponges and corals reproduce by the method of budding.

In hydra, first a small outgrowth called bud is formed on the side of its body by the repeated divisions of its cells.This bud then grows gradually to form a small hydra by developing a mouth and tentacles.And finally the tiny new hydra detaches itself from the body of parent hydra and lives as a separate organism.the parent hydra has produced a new hydra.The bud formed in a hydra is not a single cell.It is a group of cells.