Question 1 What is meant by luminous object? Give example?

Question 2 What is meant by non-luminous objects? Give example?

Question 4 What is meant by incident ray?

Question 5 What is meant by reflected ray?

Question 6 What do you mean by point of incidence?

Question 7 Define the angle of incidence?

Question 8 Define the angle of reflection?

Question 9 What type of reflection takes place from a smooth surface and a rough surface?

Question 10 What makes things visible to us?

Question 11 How we are able to see the moon?

Question 14 Why a book lying on a table in a room can be seen from all parts of the room?

We need a source of light to make the objects visible. As soon as light from a torch, an electric bulb , a tube-light falls on the object, we are able to see it clearly even in a dark room or in the darkness of night.

There are two types of objects:

We can see the sun because the light given out by sun enters our eyes.

The moon is a non-luminous object which does not have its own light. We can see the moon because moon reflects light (received from the sun) into our eyes. Thus, moon is a reflector of sunlight.

We can see a book because the sunlight (bulb-light or tube-light) falling on it is reflected by the book into our eyes.

The process of sending back light rays which fall on the surface of an object, is called reflection of light.

A plane mirror reflects almost all the light which falls on it.

Laws of Reflection of Light

The laws of reflection of light are as follows:

First law: The incident ray, the reflected ray, and the normal (at the point of incidence), all lie in the same plane. They are neither coming up out of the paper nor going down into the paper.

When a ray of light is incident normally (or perpendicularly) on a plane mirror, it means that it is travelling along the ‘normal’ to the mirror surface. Since the angle of incidence is zero, so according to the second law of reflection, the angle of reflection should also be zero. The reflected ray will also travel back from the mirror along the normal. Thus, a ray of light which is incident normally (or perpendicularly) on a mirror is reflected back along the same path. 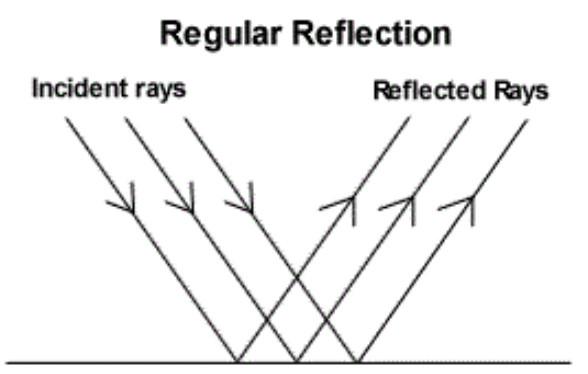 For example: When a parallel beam of light falls on the smooth surface of a plane mirror, it is reflected as a parallel beam in only one direction. Images are formed by regular reflection of light.

of light and form images.

A polished wooden table and a marble floor with water spread over it are very smooth and hence produce regular reflection of light. 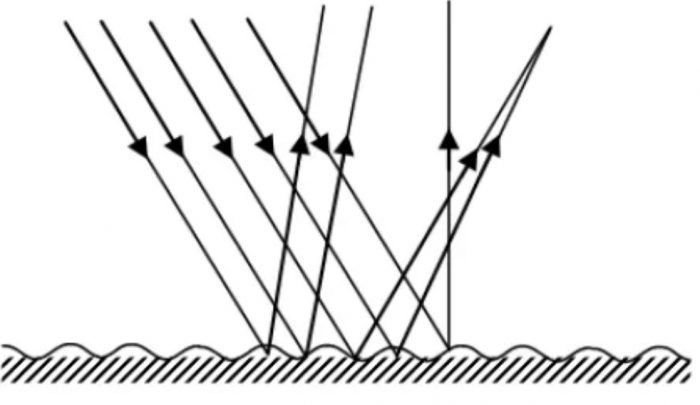 The diffuse reflection of light takes place from rough surfaces like that of paper, cardboard, chalk, table, chair, walls and unpolished metal objects.

The light rays falling on the rough surface of paper are scattered in all directions and hence no image is formed.

(2) A cinema screen has a rough surface and causes diffuse reflection of light falling on it. The cinema screen receives light from a film projector and scatters it in all directions in the cinema hall so that people sitting anywhere in the hall can see the picture focused on the screen.