Question 2 How does eye adjust itself to deal with light of varying intensity?

Question 3 Why we cannot see our surrounding clearly when we enter a darkened cinema hall from bright sunshine but our vision improves after some time?

Question 4 How does the eye lens differ form the ordinary convex lens made of glass?`

Question 5 What are rods and cones in the retina of our eye?

Question 6 What is myopia? How is it caused and corrected?

Question 7 What is Hypermetropia? How is it caused and corrected?

Question 8 What is cataract? How can the vision of a person having cataract be restored?

Question 9 What is meant by persistence of vision?

Question 10 How you can take care of your eyes?

Question 12 What is blind spot in the eye?

Question 13 What is the function of retina, iris, ciliary muscles, eye-lens, cornea?

Question 14 What is the range of vision of normal human eye?

Question 15 What is meant by least distance of distinct vision?

The eye enables us to see the various objects around us. The main parts of the human eye are : Cornea, Iris, Pupil, Ciliary muscles, Eye lens (which is a flexible convex lens), Retina and Optic nerve.

Construction of the Eye 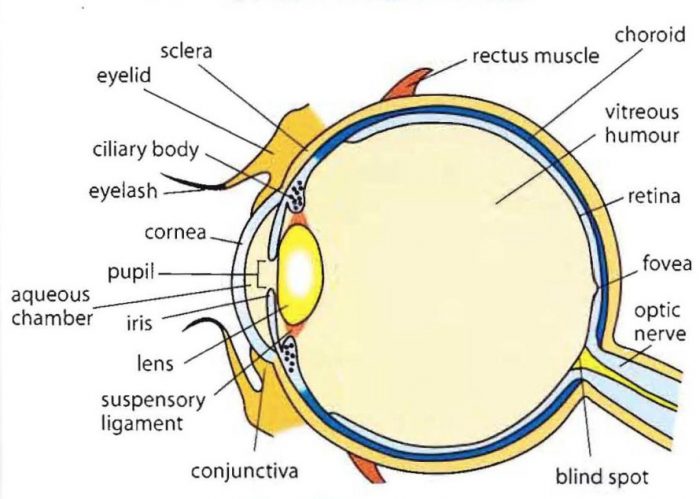 (2) The front part of eye is called cornea. It is made of a transparent substance and it is bulging out. The light coming from an object enters the eye through cornea. The main function of cornea is to protect the eye but it also helps in focussing some light (by its converging action).

(3) Just behind the cornea is the Iris. Iris is the coloured part of the eye. The iris has a hole at its centre which is called pupil. Pupil appears like a dark spot in the centre of iris because no light is reflected from it. Iris controls the amount of light entering the eye by adjusting the size of pupil. The iris is actually that part of the eye which gives the eye its distinctive colour.

(8) The eyes also have eyelids which prevent any object from entering the eyes. The eyelids also shut out light when not required.

Working of the Eye

(1) When we look at an object, then light rays coming from the object enter the pupil of the eye and fall on the eye-lens.

(2) The eye-lens is a convex lens, so it converges the light rays and produces a real  and inverted image of the object on the retina.

The image of an object formed on the retina is inverted, but our brain interprets this image as that of an erect object.

Function of Iris and Pupil

The iris automatically adjusts the size of pupil according to the intensity of light received by the eye from the surroundings.

(2) If the amount of light around us is small (as in a dark room or during the night) then iris expands the pupil (makes the pupil large) so that more light can enter the eye. This is because we need to allow more light to go into the eyes when the outside light is dim so as to see properly.

The adjustment of the size of pupil takes some time

When we go from a bright light to a darkened cinema hall, at first we cannot see our surroundings clearly. After a short time our vision improves, and we can see the persons sitting around us. This is due to the fact that in bright sunlight the pupil of our eye is small. So, when we enter the cinema hall, very little light enters our eye and we cannot see properly. After a short time, the pupil of our eye expands and becomes large. More light then enters our eye and we can see clearly.

(1) Rods are the rod-shaped cells present in the retina of an eye which are sensitive to dim light. Rods are the most important for vision in dim light (as during the night). Rod cells of the retina do not provide information about the colour of the object.

(2) Cones are the cone-shaped cells present in the retina of an eye which are sensitive to bright light (or normal light). Cones also cause the sensation of colour of objects in the retina of the eye are responsible for colour vision.

At the junction of optic nerve and retina in the eye, there are no light sensitive cells (no rods or cones) due to which no vision is possible at that spot. This is called blind spot.

If we look at a bright object and then close our eyes, the image of the object will remain in our eyes for very short duration. Thus, the image formed on the retina of the eye does not fade away immediately.

The image of an object seen by our eyes persists (or remains) on the retina for about 1/16 th of a second even after the object has disappeared from our view. This happens because the stimulated light-sensitive cells of the retina take a little time to come back to their original state.

The ability of an eye to continue to see the image of an object for a very short duration even after the object has disappeared from view is called persistence of vision.

It is due to the phenomenon of persistence of vision that we are able to see movie pictures in a cinema hall. This is because if the still pictures of a moving object are flashed on our eyes at a rate faster than 16 pictures per second then (due to persistence of vision), the eyes perceive this object as moving.

The movies that we see are actually a number of still pictures (in the form of a long film) which are taken in proper sequence with a movie camera. These still pictures are projected on the screen of a cinema hall at the rate of 24 pictures per second (which is faster than 16 pictures per second) with the help of a film projector. Under these conditions, the image of one picture seen on the screen persists on the retina till the image of next picture falls on the screen, and so on. Due to this, the slightly different images of the successive pictures present on the film merge smoothly into one another and give us the feeling of moving images (or movie).

Range of Vision of a Normal Human Eye

The farthest point from the eye at which an object can be seen clearly is known as the far point of the eye. The far point of a normal human eye is at infinity.

(1) When the eye is looking at a distant object, the ciliary muscles are relaxed due to which the eye-lens is thin (or less convex). The thin eye-lens has smaller converging power which is sufficient to converge the parallel rays of light coming from a distant object to form its image on the retina.

(2) When the same eye is looking at a nearby object, the ciliary muscles get stretched due to which the eye-lens becomes thick (or more convex). The thick eye-lens has greater converging power which is required to converge the diverging rays of light coming from a nearby object to form its image on the retina.

Defects of the Eye

Myopia is caused either due to high converging power of eye-lens or due to eye-ball being too long. In an eye suffering from myopia, the image of distant object is formed in front of retina due to which the person cannot see it clearly.

Myopia is corrected by using spectacles containing concave lenses (diverging lenses) of suitable power. The image of distant object is then formed on the retina and hence can be seen clearly.

Hypermetropia is caused either due to low converging power of eye-lens or due to eye-ball being too short. In an eye suffering from hypermetropia, the image of object is formed behind the retina due to which the person cannot see it clearly.

Hypermetropia is corrected by using spectacles containing convex lenses (converging lenses) of suitable power. The image of nearby object is then formed on the retina and hence the person can see it clearly.

(3) The medical condition in which the lens of eye of a person becomes progressively cloudy resulting in blurred vision is called cataract.

The vision of the person can be restored after getting surgery done on the eye having cataract. The opaque lens is removed from the eye of the person by surgical operation and a new artificial lens is inserted in its place. The eye-defect called cataract cannot be corrected by any type of spectacle Lenses.

Care of the Eyes

Some of the precautions to protect our eyes and maintain healthy eyesight are as follows:

(1) Wash your eyes at least twice a day with clean water.

(2) Do not read or write in dim light because it puts strain on the eyes and may cause headache. Too much light can injure the retina and damage the eyes. So, we should never look directly at the sun or other powerful lights.

(3) Always read by keeping the book at normal distance for distinct vision. Do not read by bringing the book too close to your eyes or by keeping it too far from the eyes.

(4) Raise your eyes from time to time while reading, writing or watching television so as to relax the eyes.

(6) If you find difficulty in reading a book or writing on the blackboard or you have to squeeze your eyes to see clearly, get your eyes checked by an eye-specialist doctor immediately

(7) In case of an injury or any other problem to the eyes, consult an eye-specialist doctor. Self-treatment can be dangerous to the eyes.

(8) Vitamin A is essential for keeping the eyes healthy. Deficiency of vitamin A in the diet is responsible for many ailments of the eye including night blindness. The inability of eyes to see properly in dim light especially at night) is called night blindness.

We should also include those food items in our diet which are rich in vitamin A such as Carrots, Cod-liver oil (Fish liver oil), Green vegetables, Broccoli, Eggs, Milk, Butter, Curd, Cheese and fruits such as Papaya and Mango which contain vitamin A to prevent night blindness and keep our eyes healthy.

Those persons who are unable to see are known as visually challenged persons. Such persons develop their other senses more sharply. They try to identify things by touching and by listening to voices more carefully.

The braille was developed by Louis Braille who was himself a visually challenged person. There is a braille code for common languages, mathematics and scientific notations.