Question 1 What is nucleus?

Question 2 What are the unit of inheritance in living organism?

Question 3 What is the function of nucleus in cell?

Question 4 What is nuclear membrane?

Question 5 What are chromosomes?

Question 6 Which cells do not contain nucleus?

Question 7 What is protoplasm?

Question 9 What is the function of genes? 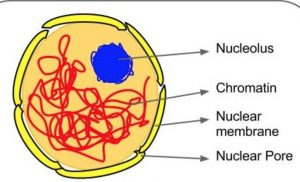 Nucleus is a large, spherical organelle present in all the cells.

(1) In animal cells, nucleus lies in the centre of the cell whereas in plant cells the nucleus may be on the periphery of the cell.

(2) Nucleus is the largest organelle in a cell.

(3) It can be stained and seen easily with the help of a microscope.

(4) Nucleus is separated from the cytoplasm by a membrane called nuclear membrane.

(5) The transmission of characteristics from the parents to the offsprings is called inheritance. Nucleus contains thread like structures called chromosomes

(6) Chromosomes contain genes. The function of chromosomes is to transfer the characteristics from the parents to the offspring through the genes. The nucleus also contains a tiny round structure called nucleolus.

(7) The nucleus containing chromosomes and nucleolus is bound by a membrane called nuclear membrane. It has tiny pores for the exchange of materials with cytoplasm. Red blood cells, however, do not have a nucleus.

(10) It is the genes on the chromosomes which decide all sort of things, the colour of our eyes, the look of our hair, the shape of our nose, our complexion, our appearance etc.

(11) The different combinations of genes from both the parents results in different characteristics in the offspring.

(12) All the living matter in a cell is called protoplasm. It is a liquid substance which is present inside the cell membrane. It includes cytoplasm, nucleus and other organelles. Most of the protoplasm is made up of compounds of only 4 elements :Carbon, hydrogen, oxygen. Some of the compounds present in protoplasm are water, carbohydrates, proteins, fats, nucleic acid and mineral salts.