Question 1 What is meant by reflection of light?

Question 3 What is a mirror?

Question 4  State the difference between real images and virtual images?

Question 5 What is a periscope?

Question 6 Explain the working and construction of periscope?

Question 8 Why we often see bright circular patches of light on the ground under a tree on a sunny day?

Question 11 State the characteristics of image formed in a plane mirror?

Question 12 What is lateral inversion?

The process of sending back light rays which fall on the surface of an object, is called reflection of light. When a ray of light falls on a mirror at point, it is sent back by the mirror in another direction.

A narrow beam of light is called a ray.

A ray of light is represented by a straight line with an arrow head on it. The direction of this arrow shows the direction in which the light is traveling at that time.

The mirror which we use everyday are plane mirrors.

A plane mirror is a thin, flat and smooth sheet of glass having a shiny coating of silver metal on one side.

The glass sheet of plane mirror offers a smooth surface. This smooth surface produces regular reflections and helps in forming a clear image.

The silver metal coating makes the plane mirror shiny. The shiny surface of plane mirror gives us the maximum reflection of light. This helps in forming a bright image.

The red paint behind the Silvered surface of plane mirrors reduces the transmission of light through the mirror and also protects the delicate silver coating of the mirror.

The reflection of light in a plane mirror takes place at the silvered surface inside it.

A mirror reflects most of the light falling on it. 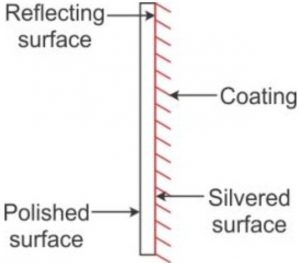 The way light is reflected from a surface depends on whether the surface is rough or smooth.

Some of the common objects having very smooth surfaces are mirrors, polished metal objects and still water surfaces.

Light rays coming from an object and striking a smooth surface are reflected in a regular way. When this reflected light rays enter our eyes, we can see an image of the object in the smooth surface.

Image of an object

There are two types of images that can be formed with light :

The image which can be obtained on a screen is called a real image.

For example: The image formed on a cinema screen.

The image formed in a pinhole camera.

A real image is formed when light rays coming from an object actually meet at a point after reflection from the mirror.

A real image can be formed on a screen because the light rays actually passes through it. Real images can be formed by a curved mirror known as concave mirror.

The images which cannot be obtained on a screen is called a virtual image.

The image of our body formed by a plane mirror cannot be received on a screen, it can be seen only by looking into the mirror.

If we put a screen behind the plane mirror, we will not see anything on it. There are no light rays behind the mirror. The image are not really there at all. Virtual images are also called unreal images.

A virtual image is formed when light rays coming from an object appears to meet after reflection from the mirror. It is not possible to obtain a virtual image on screen because light rays actually do not pass through it.

Concave mirror can form a virtual image only when the object is very close to it.

Virtual image of ourselves which we see when we look into the plane mirror is the same side up as we are, the images is of same size and images of same distance behind the mirror as we are in front of it if.

If we stand in front of a big plane mirror, we see the image of our body in it. If we lift our right hand, then our image lift its left hand. And if we lift our left hand, then the image appears to lift its right hand. This means that right side of a body becomes the left side in the image, whereas the left side of our body becomes right side in the image. It appears as if our image has been reversed sideways with respect to our body.This effect of reversing the sides of an object and its image is called lateral inversion. 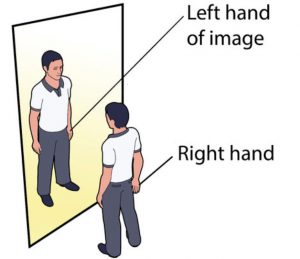 Characteristics of image formed by a plane mirror

(1) The image formed in a plane mirror is virtual or unreal. It cannot be obtained on a screen.

(2) The image formed in a plane mirror is at the same distance behind the mirror as the object is in front of it.

(3) The image in a plane mirror is of the same size as the object. It is neither enlarged not diminished.

(4) The image in a plane mirror is erect. It is the same side up as the object.

(5) The image in a plane mirror is laterally inverted or sideways reversed with respect to the object.

(1) Plane mirror are used at home to view ourselves.

(3) Plane mirror are fixed on the walls of certain shops to make the shop look bigger. 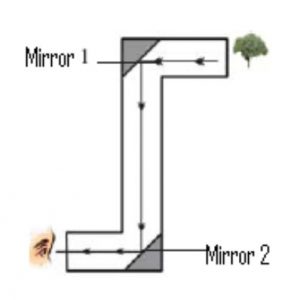 Periscope is a device which gives us higher view than normal.

(1) By using a periscope we can see the objects on the other side of a high wall, without having to climb over the wall.

(3) A soldier sitting in a trench can observe the enemy activities above the ground by using a Periscope.

(4) A person sitting in a submarine can see ships over the surface of the sea even though the submarine itself may be submerged under water.

Construction and working of a Periscope

(1) A Periscope consists of a long tube having two plane mirrors fitted at its two ends.

(2) The two plane mirrors are arranged in such a way that they are parallel to one another.

A periscope works on the reflection of light from two plane mirrors arranged parallel to one another.