Question 1 Name the most important source of light on Earth?

Question 2 What are natural sources of light. Give example?

Question 3 What are luminous objects. Give example?

Question 4 What are non-luminous objects. Give example?

Question 5 What are man-made sources of light. Give example?

Question 6 What are transparent materials. Give examples?

Question 7 what are translucent materials. Give example?

Question 8 What are opaque materials. Give examples?

Question 9 On what principle does a pinhole camera object?

Question 10 Why we cannot see a book placed behind a wooden screen?

Question 11 How we are able to see a table lying in a room though it does not give out its own light?

Question 12 Why we cannot see the objects placed in a dark room?

Question 13 Give an activity to show that light travels in a straight line?

Question 14 State 2 differences between a pinhole camera image and shadows?

Question 15 What is a shadow?

Question 16 What is rectilinear propagation of light?

Question 17 How are we able to see the moon?

Question 18 What are the main characteristics of the image in a pinhole camera?

Question 19 What are the three things required to observe a shadow?

An object which gives out light is called a source of light.

The most important source of light for us is the Sun. It is about 150 million km away from us, its light makes the daytime bright on the earth. At night we use an electric bulb, tube light, lamp, candle or torch as a source of light.

Natural and Man-made sources of light 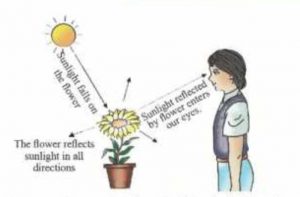 An object which gives out its own light is called luminous object.

An object which does not give out its own light is called a non-luminous object.

For example: Moon is a non-luminous object which does not have its own light. We can see the moon because it reflects sunlight into our eyes. When sunlight falls on the surface of moon, then some of this light sunlight is reflected by the moon towards the earth. And to us it appears as if the light is being given out by the moon itself. But moonlight is the sunlight which is reflected from the surface of moon. The planets can also be seen in the sky because they are reflectors of Sunlight.

A flower is a non-luminous object. It does not give its own light. We can see a flower because it reflect sunlight falling on it into our eyes. The flower reflects some of the sunlight falling on it in all the direction. When the sunlight reflected by flower enters our eyes, we are able to see the flower. During night time, the flower is visible to us because it reflects the light received from an electric bulb.

We can see many things kept in a room during the day on which sunlight does not fall directly. All the objects outside the room scatter the sunlight falling on them in all the direction. Even the air scatters some sunlight. It is this scattered sunlight which enters the room and helps us to see the things lying in the room which are not in direct sunlight.

We can see the table because it reflects the light falling on it in all directions. And when this reflected light coming from the table enters our eyes, we are able to see the table.

Depending on behaviour towards light all the materials can be classified as transparent, translucent or opaque objects.

Those materials which allow all the light to pass through them are called transparent material.

The window panes in our homes are usually made of transparent glass.

Our spectacles glasses are also transparent.

The glass tumbler in our kitchen are also transparent objects.

The test tube, flasks and beakers in Science laboratory are transparent.

A car windscreen is transparent.

If we are able to see through an object clearly, it is allowing all the light to pass through it and hence it is a transparent object.

Those material which allow only some of the light to pass through them are called translucent materials.

If we look at burning candle through a piece of ground glass or butter paper we can see only a dim light of the candle. We can neither see the candle itself nor the candle flame clearly through the ground glass.

The windows of bathrooms in our homes are made of translucent material called ground glass so that though some outside light may enter the bathroom but nothing is visible clearly from outside.

Clouds are translucent material. Though we cannot see the sun through clouds on the cloudy day but still there is some sunlight all around. This is because being translucent, clouds allow some of the sunlight to pass through them due to which there is a light on earth even on cloudy day.

The translucent objects absorbs or reflect a good part of light falling on them and allow only some of the light to pass through them.

Those materials which do not allow any light to pass through them are called opaque materials.

If we look at the burning candle through a piece of cardboard held in front of our eyes, we cannot see anything at all. This is because the cardboard does not allow the light of candle flame to pass through it and reach our eyes.

We cannot see anything through a wooden door because the wooden door is an opaque object which does not allow any light to pass through it.

The Opaque objects do not allow light to pass through them because they absorb or reflect all the light falling on them.

If we Shine a torch on a dark night we will see that the beam of light produced by a torch travels straight into darkness.

The beams of search light at the airport show that light travels in straight lines.

The beam of light coming from the projections room of a cinema hall and falling on the screen also shows that light travels in a straight line.

The formation of shadow by a source of light also suggest that the light travels in straight line. This is because if light could bend and travel in curved lines, then it would have reached behind the object and hence no shadow could have been formed.

The property of light travelling in straight line is called rectilinear propagation of light. 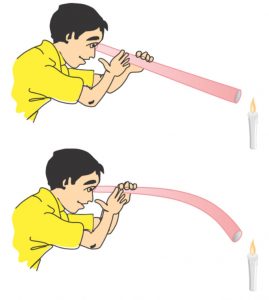 Fix a lighted candle on a table. Take a rubber tube, stretch it straight and look through it at the flame of the candle with one eye. We will find that when the rubber tube is straight, we can see the light of candle flame through it. 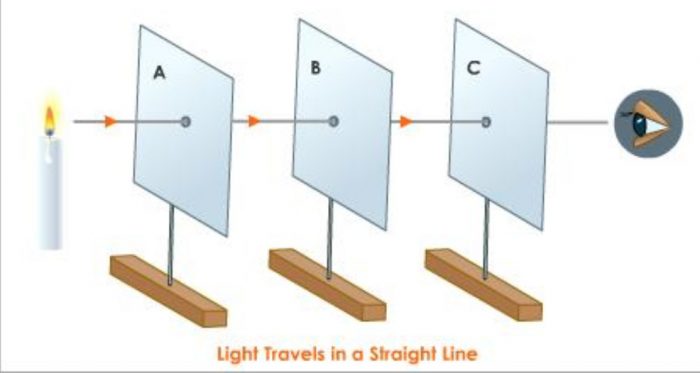 Fix the three cardboards vertically on the table in such a way that their holes are in a straight line.

Place a burning candle behind the farthest cardboard. The candles should have its flame at about the same height as the holes in the cardboards.

Now push the middle cardboard slightly out of its position so that the three holes do not remain in a straight line. If we look through the hole in the first cardboard, we cannot see the flame of candle now. This means that when all the holes of cardboard are not in a straight line, the light of the candle flame does not reach our eyes.

This shows that light travels in a straight path. 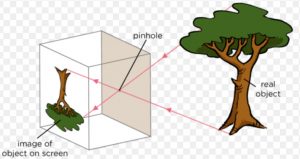 The pinhole camera consists of a closed box having a small pinhole in the front and a translucent screen at the back.

It is usually used to view the images of various objects like trees and buildings.

The pinhole camera can also be used to take photograph of an object if a photographic film is placed on the screen.

The pinhole camera works on the principle that light travels in a straight line.

Light rays coming from an object and going in through the pinhole, travel in straight line to the screen.

The upside down image of an object formed by a pinhole camera is called an inverted image.

An inverted image is formed in a pinhole camera because the light rays coming from the top and bottom of the object cross over at the pinhole.

Main characteristics of the image in a pinhole camera

(1) The image in a pinhole camera is inverted as compared to the object.

(2) The image in a pinhole camera is real because it can be formed on a screen.

(3) The image in a pinhole camera is of the same colour as the object.

The pinhole cameras is kept small so that only a very small number of light rays pass through it and a sharp image of the object is formed on the screen.

If the pinhole camera is made bigger, then a large number of light rays from a given point of the object pass through it due to which a blurred image of the object is formed.

On a sunny day, when we pass under a tree covered with a very large number of leaves, we often see bright circular patches of light on the ground. These bright circular patches of light are the pinhole images of the sun. This is because the small holes between the cluster of the leaves act as a pinhole and light coming from the sun passes through these natural pinholes to form bright circular images of the sun on the ground below the shady tree. In this case, the sun is the objects, the tiny gaps between leaves are the pin holes and the ground at as the screen.

When an object is placed in front of a source of light, it produces a shade or dark area behind it. Shadows are formed when light is stopped by an object.

A shadow is formed when an opaque object comes in the path of light and stops it. An object forms shadow on the opposite side to the source of light. The shadows of objects are usually similar in outline to the object and hence we can identify the object from their shadows.

The shadow of a ceiling fan hung in the centre of room will fall on the side opposite to the lighted electric bulb. A lighted candle fixed in a room will also cast our shadow and that of the ceiling fan on the opposite side.

The shadow of an object can be seen only on a screen. The surface such as the walls of a room, a building and even ground act as screen for the shadows which we see in our everyday life.

We require 3 things to observe a shadow

(3) A screen on which the shadow can be seen.

When an aeroplane is parked on the ground, we can see it shadow which is formed by sunlight. The aeroplane obstructs the sunlight to form a shadow on the nearby ground.

When the same aeroplane is flying high up in the air, even then the aeroplane obstructs the sunlight falling on it but its shadow is not seen on the ground because the ground is very, very far below the aeroplane.

An electric bulb and candle forms of shadows because they are comparatively small sources of light.

No Shadow can be formed when there is no source of light as on a dark moonless night or in a dark room.

Characteristics of shadow of an Object

(1) The shadow of an object is erect i.e. same side up as the object.

(3) Irrespective of the colour of the object the shadow is always black.

Difference between pinhole image and Shadow:

The formation of image in a pinhole camera and the formation of shadow by object placed in the path of light provide the evidence that light travels in a straight line.