You are here: Home / Class 6 / Science / Fibre To Fabric / Types of Fibres

Question 1 Name the animal from which wool is commonly obtained?

Question 2 What are the two types of fibres? Give example of each type of fibre?

Question 3 What is ginning? How is it done?

Question 7 What type of soil and climate are good for growing cotton?

Question 8 Describe how jute fibres is obtained from jute plants?

Question 10 What is meant by natural fibres? Give example?

Question 11 What is meant by synthetic fibres? Give example?

Question 12 What are flax fibres?

Question 13 What is coir?

Question 14 Name two items that are made from coconut fibres?

The fibres are of two types

The fibres which are obtained from natural sources like plants and animals are called natural fibres.

Natural fibres are a collection of tiny threads obtained from plants and animals.

Flax and jute are the natural fibres obtained from plants.

Wool and silk are the natural fibres obtained from animals.

Silk fibres are obtained from silkworm. It is drawn from the cocoon of silkworm.

Synthetic fibres are much more strong than natural fibres. The clothes made of synthetic fibres lasts for how much longer time. We can distinguish between the cotton, wool, silk and synthetic fabrics by performing the burning test.

Take a small piece of fabric to be tested. Hold one end of the fabric with a pair of tongs and bring the other end of fabric over the flame of burner.

1) If the piece of fabric burns vigorously giving a smell of burning paper, then it is cotton fabric.

2) If the piece of fabric burns giving a smell of burning hair, then it is a woollen fabric.

3) If the piece of fabric burns giving the smell of charred meat, then it is a Silk fabric.

4) If the piece of fabric burns slowly giving the smell of burning plastic, then it is synthetic fabric.

Cotton fibre is also known as cotton wool. Cotton fibre comes from cotton plants which are grown in the field by the farmers. Cotton crop is usually grown at places having black soil and warm climate. In India, cotton is mainly grown in the states of Maharashtra and parts of Andhra Pradesh, Madhya Pradesh and Gujarat.

The process of separating cotton fibres from the seeds is called ginning.

These fabric are then used for making clothes, filling pillows, mattresses and quilts.

The wicks of oil lamps are also made of cotton. 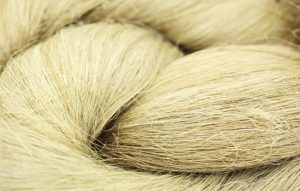 The fibres obtained from flax plant are called flax fibre or flax .

The fibres are obtained from the stem of flax plant.

The flax fibres are used for making fabric or cloth.

The cloth made of stem fibres of Flax is called linen.

Linen is used for making bed sheets. Flax plants are also cultivated in fields to obtain fibres for making fabrics. 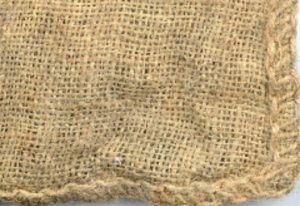 Jute fibre is obtained from the stem of a jute plant.

Jute is mainly grown in West Bengal, Bihar and Assam. Jute crop is cultivated in the rainy season.

Jute plant are harvested from the fields when they are at flowering stage. The stems are harvested jute plants are immersed in water for a few days. During this time, the stem rot and fibres are left behind. The jute fibres are separated from water by hand.

Jute is a strong plant fibre. Jute fibre is used for making ropes and jute bags. The jute bags are used as shopping bags that as well as for storing food grains.

The fibre obtained from wood are used to make paper. Thus, paper is also made from plants.