You are here: Home / Class 6 / Science / Fibre To Fabric / Making of Fabric

Question 1 What is loom?

Question 2 What is the difference between handloom and powerloom?

Question 3 What is meant by weaving?

Question 4 What is knitting?

Question 6 Name 2 processes by which fabrics can be made from yarn?

Question 7 What is meant by yarn?

Question 8 Name the two types of plants cultivated near the river nile in ancient Egypt to obtain fibres for making fabrics?

Question 9 Name materials which are used by the people in ancient times to cover themselves?

The fabrics are made from fibres in the following two steps :

1 Fibres are first converted to yarn by the process of spinning.

2 Fabric is made from yarn by the process of weaving and knitting.

Making of yarn from fibres

Yarn is a kind of long twisted thread. Yarn is made from fibres by the process of spinning.

In the process of spinning, fibres from a mass of cotton are drawn out and twisted. This brings the tiny fibres together to form long and twisted threads called yarn.

Hold a lump of cotton fibres in the left hand. Now, start pulling out cotton fibres gently with the thumb and forefinger of right hand while twisting the cotton fibres continuously. We will get a cotton yarn.

Yarn can be made from fibres by using three devices :

A simple device which is used for spinning cotton and making yarn is hand spindle. 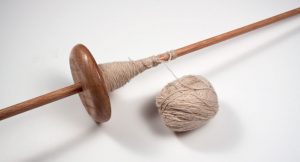 Hand operated device which is used for spinning cotton and making yarn is spinning wheel .

The spinning wheel is called Charkha.

Spinning of yarn on a large scale is done by using spinning machines in mills or factories. The yarn produced by spinning is then used for making fabric.

Fabric are made from yarn by two main processes :

The process of making fabric or cloth by arranging yarns at right angles to them, is called weaving.

Weaving involves two sets of yarns arranged at right angle to one another.Two sets of yarn are woven to make a fabric.The weaving of yarn to make fabrics is done by using looms. (A device for making fabrics by weaving yarn or threads is called a loom)

There are 2 types of looms:

(1) Handloom : The loom which is worked by hand.

(2) Powerloom : The loom which is worked with electric power.

In knitting, a single yarn is used to make a fabric. The process of making a fabric by interlocking loops of single yarn with knitting needles or machines, is called knitting.

Knitting is done by hand and also on machines.

A sweater is made by the process of knitting by using a single woollen yarn with the help of knitting needles or on the machines.

Knitted fabrics are made of a single yarn running throughout the fabric.

In ancient times, people used the bark of trees, big leaves of trees, animal skin and furs to cover themselves.

When people began to practice agriculture and settle at places near the sources of water, they learnt to weave twings and grass to make mats and baskets. After that vines(very thin stems of climbing plants) and animal fleece such as sheep’s wool, were twisted together to form long strands. These strands were then woven into fabrics.

People started growing cotton and flax plants to obtain fibres for making fabrics. These crops were grown near the sources of water like rivers so as to get sufficient water for irrigation.

People just draped the fabric around different body parts to cover themselves. After the invention of sewing needle, people started stitching fabrics to make different types of clothes. The clothes used to be hand-stitched but these days sewing machines are used for the quick stitching of clothes.