Question 2 State any two dangers of electricity if handles carelessly?

Question 4 Name few gadgets which use electricity for their working?

Question 5 Explain why we should never join the two terminals of a cell by wire only?

Question 6 Draw the sketch of a torch bulb?

Question 7 What is a dry cell? Explain the construction of dry cell?

Question 8 Which part of the torch bulb gives off light when it is connected to a cell by wires?

Electricity is useful because it can be converted easily into various other forms of energy such heat energy, light energy, mechanical energy, sound energy and magnetism. We use electricity to run many appliances in our day to day life which makes our work easier.

(1) At the touch of a switch, we can make an electric bulb glow and produce light.

(2) Electricity is used to run fans, coolers and air conditioners which make our life cool and comfortable during hot summer days.

(3) The refrigerator in our homes also works with electricity.

(4) Electricity is also utilised in a room heater which keeps us warm on a cold winter day.

(5) Electricity is used to operate water pumps in our homes which lift water from ground level to the rooftop tank.

(6) Electricity is used to pump underground water from tube wells for irrigation in field.

Electricity can also be very dangerous

If electric wires and electrical appliances are handled carelessly, then a person can get electric shock which may cause severe burns and even death.

Improper handling of electricity can also cause fires. A danger sign is usually displayed on electric poles, electric substations, electric transformers and many other places to warn the people that they should not come in contact with them because electricity can be very dangerous.

We should never use electricity from power points or sockets in our homes or school for performing science experiments because it is very unsafe and dangerous to do so.

A cell provides much less electricity than that provided by power stations. A single electric cell usually provides only 1.5 volts of electricity whereas the electricity from power plants which is used in our homes is 220 volts.

If two or more cells are joined together, they make a battery. Cells and batteries are available in the market in different shapes and sizes depending on their use. In order to get electricity from a cell or battery we have to connect it into a circuit. 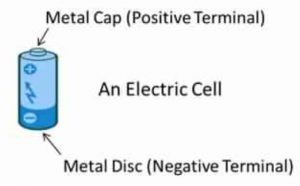 An electric cell is a device which produces a small amount of electricity.

The electric cell which we use in torch is known as dry cell. It is called dry cell because it does not contain any liquid chemical.

The electric cell is a cylindrical device having a small metal cap on one side and a metal disc on the other side.

The electric cells or batteries used in cars, cameras, mobile phones can be recharged again and again for many years.

Electric cells are used as a source of electricity in torches, wristwatches, alarm clocks, transistor, radios, TV remotes, cameras, mobile phone, toys and many other devices. 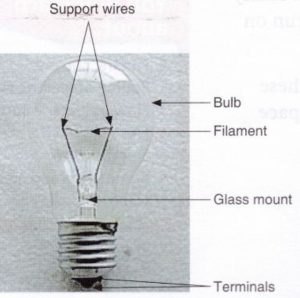 The small electric bulb which produces light when a torch is switched on is called a torch bulb.

(1) The torch bulb consists of a small glass bulb fixed on a metal case. Inside the glass bulb, there is a very thin wire fixed between two thick wire.

(3) The two thick wires inside the glass bulb provides support to the filament and also make the connection of the filament to the outer circuit.

Metal case of the torch bulb is shaped like a screw so that it can be fixed in the bulb holder.

An electric bulb has a filament which is connected to the two terminals. The electric bulb glows when electric current passes through its filament. The small amount of electricity produced by one or two dry cells can light up only a small electric bulb like a torch bulb, it cannot light up the big electric bulb which we use for lightning in our house.