You are here: Home / Class 6 / Science / Electricity and Circuits / Circuits

Question 1 What is meant by an electric circuit?

Question 2 Draw a circuit consisting of a cell, a torch bulb and connecting wires?

Question 3 What is meant by a complete circuit?

Question 4 What is meant by an open circuit?

Question 5 Draw a labelled diagram of a torch?

Question 6 Where does a torch gets electricity from?

Question 7 Why do we need a switch in the torch?

Question 8 How does a fused bulb differ from a normal bulb?

Question 9 What happens to the circuit when the bulb in it gets fused?

Question 10 What is the purpose of using an electric switch?

Question 11 Name some electrical gadgets which have switches built into them?

Question 12 What is the function of a switch?

Question 13 What is an open switch?

Question 14 What is a closed switch?

Question 15 What is torch?

An electric circuit is a path along which electricity can flow. 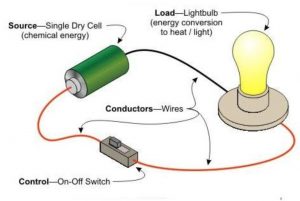 (1) Connect the torch bulb to the positive and negative terminals of a cell by using two pieces of wire.

(4) On connecting the torch bulb between the two terminals of the cell, the bulb lights-up or glows.The bulb lights up because electricity flows through its filament.

(5) Electricity or electric current from one end of the cell flows along the wire through the bulb and then back to the cell along the other wire.

(6) The wires and bulb form a continuous path between the two terminals of the cell for electricity to flow through. This path is called an electric circuit.

between the two terminals of an electric cell. The bulb glows only when electricity (or electric current) passes through the circuit.

The electric circuit in which there is no gap in the connections between the terminals of the cell, wires and bulb, etc., is called a complete circuit or closed circuit. A bulb lights up when the circuit is complete (or closed).

In a closed circuit, the electric current passes from one terminal of the cell to the

Sometimes an electric bulb does not glow even if it is connected to a cell by wires without any gap in the circuit. This can happen if the bulb has got fused. When the filament (thin wire) of a bulb gets broken, the bulb is said to be fused.

When we have a fused bulb in a circuit, the circuit gets open (or broken) and electricity cannot pass through it. Since no electricity passes through the broken filament of a fused bulb, a fused bulb does not light up even if it connected properly to a cell. 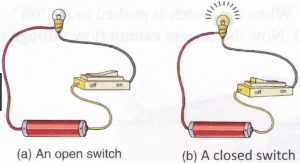 If we want to ‘turn on’ or ‘turn off’ a bulb (or any other electrical appliance) easily, we should connect a switch in the electric circuit. The switch is a simple device which is used to ‘open’ or close a circuit.

A switch is a simple device which breaks a circuit or completes a circuit, as desired by us. A switch works by opening and closing a gap in an electric circuit.

When the switch is in the ‘off position’, a gap opens up in the circuit due to which electricity stops flowing in the circuit and hence the electrical appliance stops working.

Some of the electrical appliances which have inbuilt switches are : table fan, room heater, room cooler, mixer and grinder, table lamp, washing machine, hair drier, drilling machine, torch, television, radio set and microwave, oven. It is usually very difficult and inconvenient to keep the two wires (coming from a cell) in touch with the two terminals of a torch bulb just by holding the bulb in hand or by fixing with adhesive tape. So, for the sake of convenience, the torch bulb is fixed in a bulb holder. The two terminals of the bulb are connected to the two terminals of the bulb holder for making connections in the circuit.

Similarly, a cell can also be put in a small cardboard box so as to hold two wires in contact with its two terminals, rather than using rubber bands or adhesive tape for this purpose.

Adding a Switch to the Electric Circuit

An electric circuit consist of a cell, a torch bulb and two wires which makes the bulb light up. If we want to turn the bulb on’ and off easily, we should add a switch in the circuit.

(a) In the circuit, the safety pin is not touching the other drawing pin, so the switch is in the off position. There is a gap between the end of safety pin and the second drawing pin.

The circuit is incomplete (or open) due to which electricity does not flow in the circuit in this case. So the bulb does not light up. 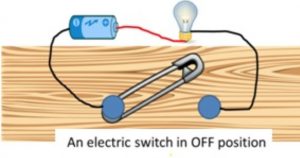 Since the safety pin is made of metal, it completes the circuit and allows electricity to pass through it. Due to this the bulb lights up.

The switch is now said to be in ‘on’ position. As long as the switch remains in the ‘on position, electricity will keep on flowing in the circuit and the bulb will continue to glow. 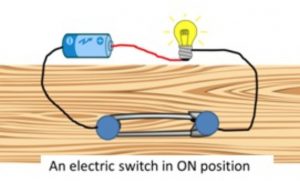 (c) Now move the free end of the safety pin away from the second drawing pin. This will again create a gap in the circuit. The electricity will stop flowing in the circuit and hence the bulb will stop glowing.

Thus, we can turn off the lighted bulb by bringing the switch back to the off position.

The switch can be used to ‘turn on’ or ‘turn off’ the bulb again and again as desired by us.

A torch is a portable electric lamp which uses two (or more) cells to light a small bulb. A torch is used to provide light when going out during a dark night or when electricity supply fails at home. The torch has a bulb that lights up when it is switched on. 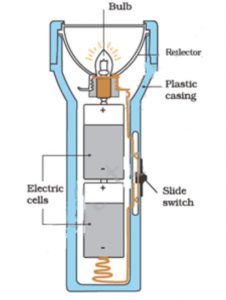 A torch contains a simple electric circuit. In a torch, two (or more) cells are connected to a torch bulb through a sliding switch.

When the torch is needed to provide light, we close the sliding switch by pushing it forward so that the circuit is completed and the bulb lights up.

When the torch light is not needed, the sliding switch is opened by pushing it backwards so that the circuit breaks and bulb is turned off.A torch gets electricity from the cells kept inside it.