Question 1 What is skeleton. What are the various functions of skeleton?

Question 2 What is backbone. Write the main functions of backbone?

Question 4 What are the various parts of skeleton?

Question 5 Draw a labelled diagram of skull and hand showing bones present in it.

Question 6 What are the main functions of skull?

Question 7 What is a rib cage? State the function of it?

Question 9 What is cartilage? Name the body parts where cartilage is found?

Question 10 What is the name of small bones which make up backbone?

Question 11 What are the functions of hip bones?

Question 12 What are carpels, meta carpels and phalanges?

The ability of a human being to move its body from one place to another is called locomotion.

(2) Movement of the whole body from one place to another. 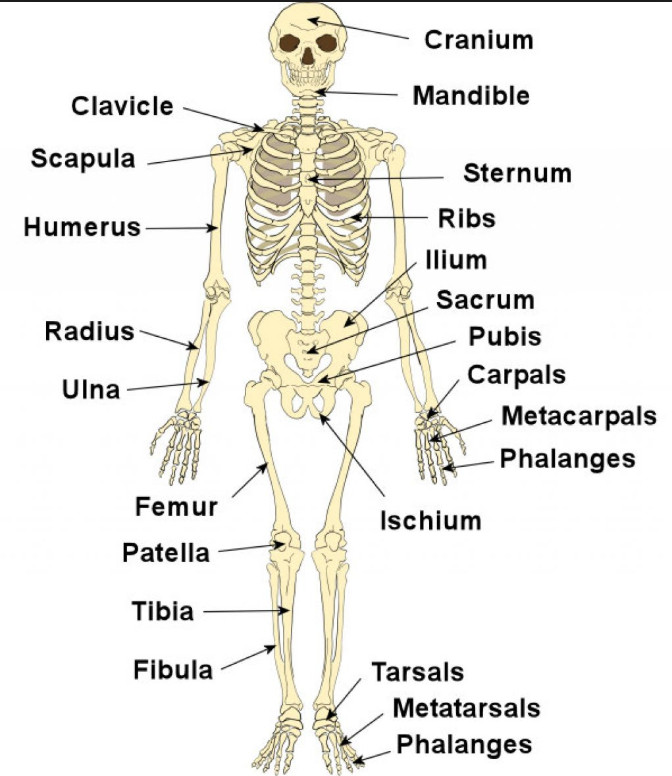 The bones of skeleton provides a framework which holds our body together.

The skeleton also gives a shape to our body.

The Skeleton is made of bones of many different shapes and sizes.

The X-ray images show the shape and number of bones in the various parts of our body. There are 206 bones in the human skeleton. Our skeleton has movable joints between various bones which allow the muscles to move the head, shoulders, arms, legs and other parts of the body.

(1) The human skeleton consist of a strong backbone which has skull at its top end. The skull has two eyes sockets, upper jaw and lower jaw in it.

(2) Ribs are attached to the upper part of the back bone forming a rib cage. There is a breastbone in front of the rib cage.

(3) At the lower end of backbone is a wide and strong structure called hip bone.

(1) Skeleton holds the whole body together and gives it a shape.

(2) Skeleton protects many delicate internal organs of the body from outside damage.

(3) Skeleton provides numerous points for the attachment of muscles of the body.

(4) Along with muscles 10 helps in the movement of body parts and locomotion.

Bony part of our head is called skull. The skull is made of 22 bony plates joined together.

Our brain is inside the skull in its upper part. The brain is made of soft tissue which could be easily damaged without a hard covering. The bones of skull form of strong case around the brain. In this way, skull protects the brain. The lower part of skull contains the face bones. Our face has sense organs such as eyes, ears, nose.  The eyes are contained in two large cavities called eye sockets in front of the skull.

The main functions of skull are:

(2) Skull protects the sense organs of the face.

The backbone is a long hollow, rod like structure running from the neck to the hips, inside our body.The scientific name of backbone is vertebral column.

(2) Back bone supports the head at top.

Chest bones are called ribs. Ribs are curved bones in our chest.

The hollow, bony structures formed by the ribs is called rib cage. Internal organs of our body such as heart, lungs, liver lie inside the strong bony rib cage. The rib cage protects the delicate internal organs like heart, liver and lungs. The rib cage also take part in our breathing movement.

Shoulders are that part of the body to which our arms are attached. The human body has two shoulders one on each side of the neck.

The main functions of shoulder bone are :

(1) Collar bone on the two sides of the next keep our shoulders apart.

(2) Shoulder blades attached the arm to our body.

(3) Shoulder blade provide sites for muscle attachment which move the arm, neck and upper part of our body.

The hip bone forms a large, basin shape framework at the lower end of the backbone, to which the legs are attached. The hip bone is also known as pelvic bone. It is made up of number of bones fused together by fixed joints. The hip bone encloses the portion of our body below the stomach. The hip bones has two sockets on the two sides of its lower part. The thigh bone of our legs are joined to the hip bone by the ball and socket joint.

Hip bone forms the link between upper part of our body and the legs.

(1) Hip bone support and protects the lower organs of the body such as intestine, urinary bladder and sex organs.

(3) Hip bone provides sites for the attachment of muscles that move legs, hips and trunk.

Bones of the head

Our hand is made up of three parts:  wrist, palm and fingers.

The wrist consists of 8 small bones known as carpels. The palm of hand is composed of five long bones called metacarpals. The fingers are made of joined bones called phalanges. There are three bones in each finger but the thumb has two bones.

At some places in the Skeleton there is a material which is not as hard as bones and which can be bend. It is called cartilage.

(1) Cartilage is present in the pinna of ear.

(2) Cartilage is found at the end of nose.

(3) Cartilage is found on the end of bones where they meet one another at a joint.

(4) Cartilage is also present between the vertebrae of backbone.

We can bend the nose easily. There is a cartilage in the end of our nose. It is the presence of cartilage which gives support and shape to our nose.

The layer of smooth cartilage reduces friction and allows the ends of bones to move easily over each other without damaging them. Cartilage is found in the joints of our body. The presence of cartilage discs between vertebra makes the backbone flexible so that it can bend absorbs the shock when we run, jump or do other such activities.