Question 1 What are muscles?

Question 3 What are the adaptations which make the fish move in water?

Question 4 How does fish swim in water?

Question 5 How many wings does a cockroach have?

Question 6 How does a cockroach fly in air?

Question 7 How does a cockroach move on the ground?

Question 8 How do the muscles attached to bone bring about movement?

Question 9 Name the two types of muscles which are involved in bending and straightening of arm?

Question 10 How does a bird walk on the ground?

Question 11 What are the various ways in which birds are adapted for flying?

Question 12 How does a snail move?

Question 13 How does a snake move?

Muscle is the fibrous tissue in the body that has the ability to contract. Muscles  are attached to the bones of our skeleton through strong fibres called tendon.

When the muscles attached to bone contracts, it pulls the bone due to which the bone moves at the joint. A muscle can only pull a bone, so another muscle attached to the same bone has to contract to move it in the opposite direction so as to bring it back to its original position. This means that two muscles work together to move a bone.

When one muscles of the pair contracts or shortens, then the other muscle of the pair is stretched or relaxed.

The stretched state of a muscle is called is relaxed state. A contracted muscle cannot come back to its original stretched state or relax state on its own. A contracted muscle can come back to its original state only when the other muscle of the pair pulls it back by contracting itself. When a muscle contracts, it shortens, but when a muscle stretches or relaxes,  it lengthens.

The movement of body parts in human beings is brought about by the alternate contraction and stretching of the muscles attached to the movable bones of the skeleton. The contraction of muscles is controlled by the brain.

Bending and Straightening of arm 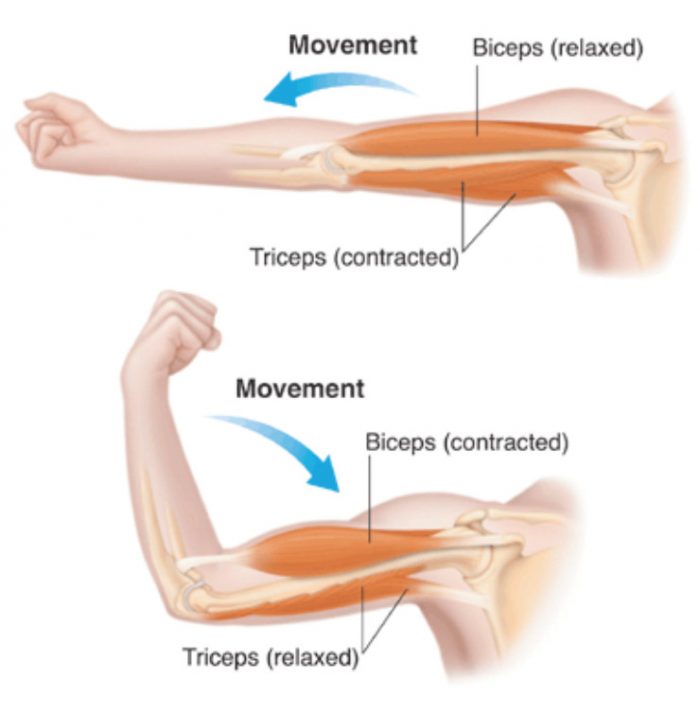 The upper arm bone has a pair of muscles called biceps and triceps on its two sides.

Human beings walk by contracting and relaxing muscles in their legs in a coordinated manner.

The action of flexor and extensor muscles in the legs bands and straightens the legs alternatively and makes us walk or move. When we straighten the leg and push the ground backward with our foot ,the ground pushes our our foot forward with an equal force. This forward push of ground on our foot, makes us move ahead.

Every animal has to push something backwards with its body parts to be able to move forward. 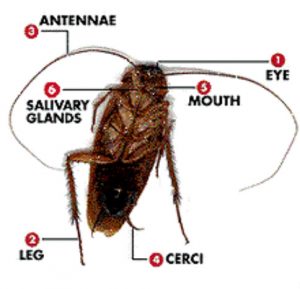 The body of cockroach is covered with hard and tough outer covering called exoskeleton.

(1) The exoskeleton provides great protection to the internal organs of cockroach and also provides site for the attachment of muscles.

(2) The outer skeleton of cockroach is made of different units joined together and that allows movement. The cockroach moves on ground as well as flies in air.

(3) Cockroach has six legs. It moves on the ground by using its legs. Each leg of cockroaches consists of stiff, hollow tubes joined together. The legs of cockroach can be moved easily by the muscles.

(4) The muscles which move the legs of cockroach are attached to the inside of the exoskeleton. The flexor muscles bend the legs whereas extensor muscles straighten the legs and make the Cockroach move.

(5) A cockroach has two pairs of wings attached to its breast by flight muscles. The cockroach flies in air by moving its wings up and down rapidly with the help of flight muscles. When the wings of cockroach move down ,they push on air download and backward the downward.

The birds can fly because their bodies are adapted for this purpose. The main adaptation in the body of birds by nature are:

(1) Their forelimbs are modified to farm Wings for flying.

(2) Their flight feathers provide a large flat surface which is light but strong.

(3)Their bones are hollow and light.

(4) Their bodies are streamlined and extremely light.

(5) They have powerful flight muscles.

(6) Their breast bone is extended for the attachment of large flight muscles.

The birds move their wings up and down quickly by the rapid contraction and relaxation of the flight muscles.

Birds fly by a constant flapping of their Wings. During the downstroke, the raised wings of a bird go down and back. When the wings go down, they push air down. The air pushes up the wings with an equal force which makes the birds go up.

After making the downstroke, the wings must go back up to the starting position. During the upstroke ,the bird brings its wings from the lowermost position to uppermost position so that it may repeat the downstroke to keep flying. While bringing the wings up during  upstroke, the bird partly folds its wings so that the effect of the air is reduced.

The animals which do not have legs use only the muscles of the body for moving from place to place.

Some of the animals which do not have legs are earthworm ,snake, fish and snake.

(1) It has muscles which help to lengthen and shorten the body.

(2) An earthworm’s body consists of liquid filled segments joined together.

(3) The segments of earthworm’s body are short and fat.

(4) The earthworm’s body has two types of muscle : circular motion and longitudinal muscles.

When circular muscles contract, they make the segments of earthworm’s body long and thin.

And when longitudinal muscles contract ,they make the long and thin segments of earthworm’s body short and fat again.

(6) An earthworm moves by lengthening and shortening its body alternately by using the circular muscles and longitudinal muscles. The tiny hairs like structures on the underside of earthworm’s body help in gripping the ground when a part of its body move.

(7) In normal shape or when the earth worm is stationary all the segments of earthworm’s body are short and fat. The hair like structures on the underside of the body are gripping the ground.

(8) To move forward, the earthworm contracts circular muscles of the front segment due to which the front part of its body becomes long and thin ,and moves ahead by some distance. During this time, the hair like structures of front part of earthworm’s body are withdrawn from the ground but the back part of earth worms body remain fixed to the ground by the gripping action of hair like structures.

(10) The longitudinal muscle of back part of earthworm contracts and make it short and fat pulling the back of body forward.

(11) In this way ,earthworm completes one step of its movement and covers a small distance. By repeating the steps and earthworm keeps on moving further. The body of earthworm secretes a slimy substance( soft and slippery) which helps in its movement.

(1) Snail is a very slow moving animal with the Shell on its back. The body of a snail is soft and consists of head, a foot and shell.

(2) The head has two pairs of tentacles for catching prey. The larger pair of tentacles has little eyes in them. shell is the outer skeleton of snail but it is not made of bones. Shell contains the internal organs of the snail.

(3) In dangerous unfavourable conditions, the snail withdraws its head and foot into the shell.

(4) The snail has only one foot under its body. The foot of a snail is large, flat and disc shaped ,which is made of strong muscles. It is called muscular foot.

(5) The snail moves with help of a large, disc shaped muscular foot. There are two sets of muscles in the foot of snail which contract and expand alternately a producing a kind of wave effect.

Fish is adapted to move in water by having a streamlined shape, flexible backbone ,powerful body muscles and fins.

(1) The body of fish tapers at both ends (being thin in the front, thick in the middle and again thin at the back .This body shape is called streamlined. Due to streamlined shape, water can easily flow around the body of fish and offers least resistance to move to movement of fish.

(2) Due to flexible backbone, the fish can bend its body easily from side to side to move through water.

(4) The thin and flat projections on the body of fish are called fins. The fins help the fish in steering , balancing and stopping in water. The tail fin also helps in moving the fish forward in water.

The side to side movement of tail are brought about by the alternate contraction and relaxation of muscles on the two sides of the body of fish. The muscles contract first on one side of the body and then on the other side, making the tail move from side to side.

When the fish tail moves from side to side ,it pushes the water sideways as well as backwards. The  backward push of tail on water, makes the fish move forward.

The tail of fish is pushing water to right side and backwards. The effect of the right side push of tail is compensated by the fish by turning its head to the left side. The backward push of tail on water makes the fish move forward.

The body of snake is long cylindrical. The Snake has long and flexible backbone which makes the body bend easily to from loops or curves.

It has also strong muscles connected to its skeleton. Snakes use their whole, long and flexible body to move from one place to another.

A snake moves forward by moving its body sideways in the form of many loops ,and pushing against the ground.

A snake contracts and relaxes the muscles on the two sides of its body alternately to form many loops or curves in which different parts of the snake’s body are moving to the left side and right side at the same time.

The snake slither on the ground by looping sideways. A snake does not move in straight line  because the sideways pushes of the loops push the snake forward as well as the sideways.