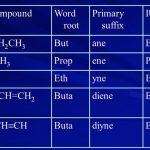 Nomenclature means the system of naming of organic compounds. In case of aliphatic compounds, two system of nomenclature generally used are: (1) Trivial or common system (2) IUPAC system Trivial or Common System Organic compounds were named after the source from which they were first isolated. For example : Urea got its name since the compound was first obtained from … END_OF_DOCUMENT_TOKEN_TO_BE_REPLACED