Dalton's Atomic Theory​ John Dalton in 1808 put forward theory known as Dalton's atomic theory The main points of this theory are: (1) Matter is made up of extremely small indivisible particles called atoms. (2) Atoms of the same element are identical in all respect i.e. shape, size and mass. (3) Atoms of different elements have different masses, sizes and also … END_OF_DOCUMENT_TOKEN_TO_BE_REPLACED 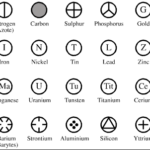 Question 1 Define atoms? Question 2 What is atomic radius? Question 3 What do you mean by symbol of an element? Question 4 Name the unit in which the radius of an atom is usually expressed? ATOMS All the matter is made up of atoms. An atom is the smallest particle of an element that can take part in a chemical reaction. Atoms of most of the elements are … END_OF_DOCUMENT_TOKEN_TO_BE_REPLACED