Question 1. Why 82°30′. E has been selected as the Standard Meridian of India?

Answer From Gujarat to Arunachal Pradesh there is a time lag of two hours. Hence, time along the Standard Meridian of India (82° 30′ E) passing through Mirzapur (in Uttar Pradesh) is taken as the standard time for the whole country. Otherwise different regions of India would have different times which would create problems; so, to have one common standard times for the whole country has been selected and called Indian Standard Time (IST).

Question 2. Why is the difference between the duration of day and night hardly felt at Kanyakumari but not so in Kashmir?

Question 1. Find out the number of Union Territories along the Western and Eastern coasts.

Answer  Union Territories along the

(a) Western Coast Lakshadweep, Diu and Daman, Dadra and Nagar Haveli and Mahe (belonging to Puducherry).

Question 3. Find out the states which do not have an international border or lie on the coast.

Question 4. Classify the states into four groups each having common frontiers with

Answer States having common frontiers with

Question 1. Choose the right answer from the four alternatives given below.

(i) Tropic of Cancer does not pass through

(ii) The easternmost longitude of India is

(iv) If you intended to visit Kavaratti during your summer vacations, which one of the following Union Territories of India will you be going to?

(v) My friend hails from a country which does not share land boundary with India. Identify the country.

(i) Name the group of islands lying in the Arabian Sea.

(ii) Name the countries which are larger than India.

Answer Russia, Canada, USA, China, Australia and Brazil are the countries that are larger than India.

(iii) Which island group of India lies to its South-East?

Answer Andaman and Nicobar Islands lie to the South-East of India.

(iv) Which island countries are our Southern neighbours?

Answer Sri Lanka and Maldives are the two island countries that are the Southern neighbours of India.

Question 3. The Sun rises two hours earlier in Arunachal Pradesh as compared to Gujarat in the West but the watches show the same time. How does this happen?

Question 4. The central location of India at the head of the Indian Ocean is considered of great significance. Why?

Answer  The Indian landmass has a central location between East and West Asia, India is a southward extension of the Asian continent.

The Deccan peninsula protrudes into the Indian Ocean, thus helping India to establish close contact with West Asia, Africa and Europe from the Western coast and South-East and East Asia from the Eastern coast.

Question 1. Identify the following with the help of map reading. 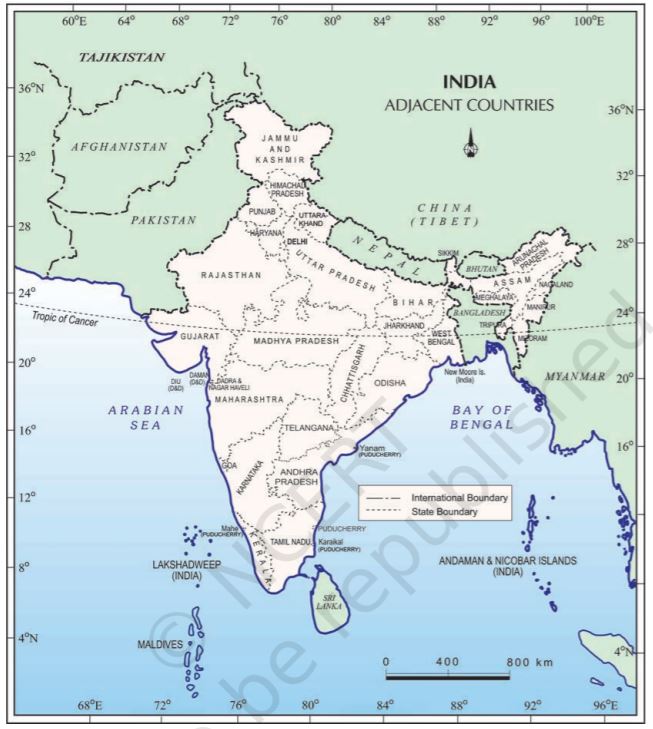 (i) The island groups of India lying in the Arabian Sea and the Bay of Bengal.

(iii) The states through which the Tropic of Cancer passes.

(iv) The northernmost latitude in degrees.

(v) The southernmost latitude of the Indian mainland in degrees.

(vi) The eastern and the Westernmost longitude in degrees.

(vii) The place situated on the three seas.

(ix) The Union Territories of India.