1. Indicate whether the following statements are True (T) or False (F).
(a) Unicellular organisms have one-celled body. (T/F)
(b) Muscle cells are branched. (T/F)
(c) The basic living unit of an organism is an organ. (T/F)
(d) Amoeba has irregular shape. (T/F)

(a) Unicellular organisms have one-celled body. (T)
(b) Muscle cells are branched. (F)
(c) The basic living unit of an organism is an organ. (F)
(d) Amoeba has irregular shape. (T)

2. Make a sketch of the human nerve cell. What function do nerve cells perform? 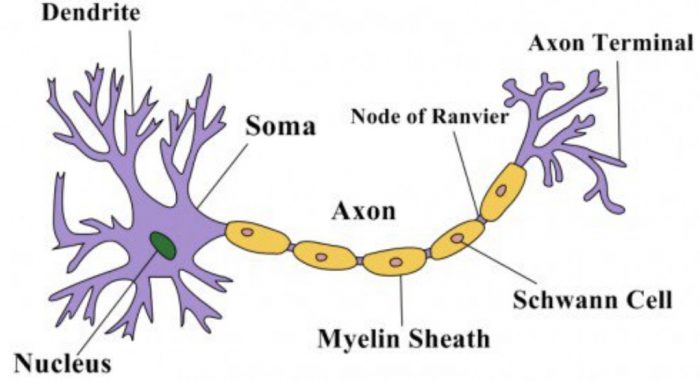 The function of nerve cell is to transmit message to the brain and also to take away messages from brain to the receptors organs.They help to control and coordinate the working of different parts of the body.

3. Write short notes on the following.

It is a transparent jelly like material which fills the cell between nucleus and cell membrane.It has many tiny structures in it.The various structures present in the cytoplasm of a cell are called organelles.Cytoplasm of all cells contain other organelles such as mitochondria, golgi bodies , nucleus and ribosomes.The cytoplasm and nucleus taken together make up protoplasm.Most of the metabolic activities occur inside cytoplasm.

(b) Nucleus of a cell

Nucleus is a large, spherical organelle present in all the cells.In animal cells, nucleus lies in the centre of the cell whereas in plant cells the nucleus may be on the periphery of the cell.Nucleus is the largest organelle in a cell.Nucleus is separated from the cytoplasm by a membrane called nuclear membrane.Nucleus contains thread like structures called chromosomes.They contain genes.The function of chromosomes is to transfer the characteristics from the parents to the offspring through the genes.

4. Which part of the cell contains organelles?

5. Make sketches of animal and plant cells. State three differences between them. 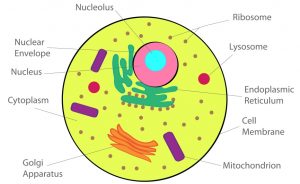 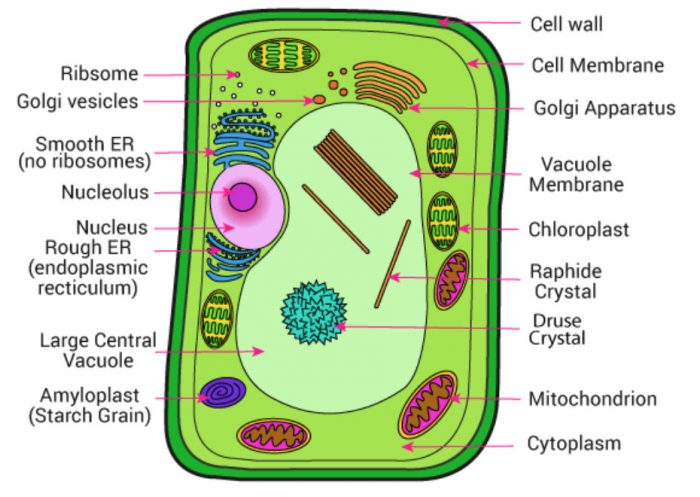 6. State the difference between eukaryotes and prokaryotes.

7. Where are chromosomes found in a cell? State their function.

Nucleus contains thread like structures called chromosomes.They contain genes.The function of chromosomes is to transfer the characteristics from the parents to the offspring through the genes.

8. ‘Cells are the basic structural units of living organisms’. Explain.

Cells are the basic units of life.All the living things are made up of cells.They are the building blocks of plants and animals.A cell is the smallest unit of life which has a definite structure and performs a specific function.Cells exist in various shapes and sizes and perform a wide range of activities.Their shapes and sizes are related to the function it performs.

9. Explain why chloroplasts are found only in plant cells?

They are green coloured organelles present in the cytoplasm of plant cells.The green colour of chloroplast is due to the presence of a green pigment called chlorophyll in them.Chlorophyll can absorb sunlight energy.In chloroplast, carbon dioxide and water combine in the presence of sunlight energy to produce food such as glucose.They are found only in those plant cells which carry out photosynthesis.

10. Complete the crossword with the help of clues given below.
Across
1. This is necessary for
photosynthesis.
3. Term for component present
in the cytoplasm.
6. The living substance in the
cell.
8. Units of inheritance present
on the chromosomes.

1. Green plastids.
2. Formed by collection of
tissues.
4. It separates the contents of
the cell from the surrounding
medium.
5. Empty structure in the cytoplasm.
7. A group of cells 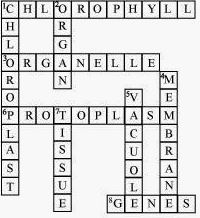