1. Fill in the blanks.
(a) Most liquids that conduct electricity are solutions of , _______ and ________.
(b) The passage of an electric current through a solution causes __________ effects.
(c) If you pass current through copper sulphate solution, copper gets deposited on the plate connected to the ______ terminal of the battery.
(d) The process of depositing a layer of any desired metal on another material by means of electricity is called______ .

Answer:
(a) Most liquids that conduct electricity are solutions of acid , bases and salts.
(b) The passage of an electric current through a solution causes chemical effects.
(c) If you pass current through copper sulphate solution, copper gets deposited on the plate connected to the negative terminal of the battery.
(d) The process of depositing a layer of any desired metal on another material by means of electricity is called electroplating .

2. When the free ends of a tester are dipped into a solution, the magnetic needle shows deflection. Can you explain the reason?

3. Name three liquids, which when tested in the manner shown in Fig.14.9, may
cause the magnetic needle to deflect. 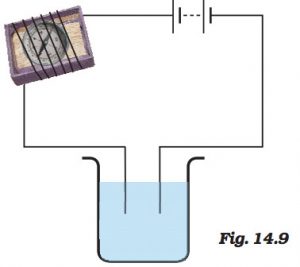 Answer:
Liquids which can be taken in a beaker to show the passage of electricity as they will show a deflection in the magnetic needle are lemon juice, vinegar, salt water. 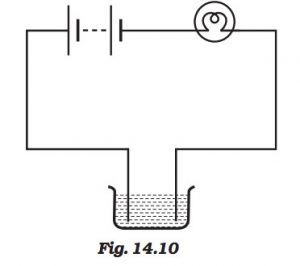 Answer:
The bulb does not glow because of the following reason:

1) Liquid in the beaker is non-conducting.

3) Electric current in the circuit is very weak due to the material which is not a good conductor of electricity or there is insufficient energy in the battery to generate electricity.

5. A tester is used to check the conduction of electricity through two liquids,
labelled A and B. It is found that the bulb of the tester glows brightly for
liquid A while it glows very dimly for liquid B. You would conclude that
(i) liquid A is a better conductor than liquid B.
(ii) liquid B is a better conductor than liquid A.
(iii) both liquids are equally conducting.
(iv) conducting properties of liquid cannot be compared in this manner.

Answer:
(i) liquid A is a better conductor than liquid B.

6. Does pure water conduct electricity? If not, what can we do to make it
conducting?

7. In case of a fire, before the firemen use the water hoses, they shut off the
main electrical supply for the area. Explain why they do this.

Answer:
Water is a good conductor of electricity.Fire men shuts off the main electrical supply for the area before pouring water.The water sprayed from the hose might conduct electricity and if the current supply or the area is not shut off, the water that is being poured in may come in contact with the electrical appliances, there is a very high chance that electricity may pass through the water and hurt the firemen

8. A child staying in a coastal region tests the drinking water and also the seawater with his tester. He finds that the compass needle deflects more in the case of seawater. Can you explain the reason?

9. Is it safe for the electrician to carry out electrical repairs outdoors during
heavy downpour? Explain.

Answer:
No. It is not safe to repair electrical appliances outdoors during heavy downpour.When rain water falls to the earth through the atmosphere, it dissolves an acidic gas carbon dioxide from the air and forms a weak acid called carbonic acid.Due to the presence of small amount of acids in it rain water becomes a conductor of electricity .The electrician may get shock while working outside.

10. Paheli had heard that rainwater is as good as distilled water. So she collected some rainwater in a clean glass tumbler and tested it using a tester. To her surprise she found that the compass needle showed deflection. What could be the reasons?

Answer:Rain water contains dissolved salt which makes it conducting. That is why it shows deflection in compass needle. Whereas on the other hand distilled water does not contain any dissolved salts and hence is a poor conductor of electricity.

11. Prepare a list of objects around you that are electroplated.

Answer:
The objects that can be electroplated are :

1) Chromium plating is done on many objects made of iron metal such as bicycle ,handlebars ,bicycle bell ,wheel rims, bathroom fittings ,LPG stoves ,motorcycle parts, and many, many other objects.

12. The process that you saw in Activity 14.7 is used for purification of copper. A thin plate of pure copper and a thick rod of impure copper are used as electrodes. Copper from impure rod is sought to be transferred to the thin copper plate. Which electrode should be attached to the positive terminal of the battery and why?

Answer:
A thick rod of impure copper is made positive electrode or anode. It is connected to positive terminal of the battery.A thin plate of pure copper is made negative electrode or cathode: It is connected to the negative terminal of the battery.On passing electric current ,the copper dissolves from the impure anode and goes into electrolyte solution. The copper present in dissolved form in electrolyte get deposited on the cathode in the pure form. The impurities are left behind in the electrolyte solution.