Answer:
(a) Friction opposes the motion between the surfaces in contact
with each other.
(b) Friction depends on the nature of surfaces.
(c) Friction produces heat.
(d) Sprinkling of powder on the carrom board reduces friction.
(e) Sliding friction is less than the static friction.

4. Suppose your writing desk is tilted a little. A book kept on it starts sliding
down. Show the direction of frictional force acting on it. 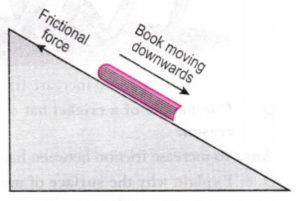 When book slides down on the desk, a frictional force acts between the book and the surface of the desk. The direction of the friction force on the book is opposite to the direction of its motion and acts in an upward direction.

5. You spill a bucket of soapy water on a marble floor accidently. Would it
make it easier or more difficult for you to walk on the floor? Why?

6. Explain why sportsmen use shoes with spikes.

Spikes are the pointed nails which get into the ground and increase friction between shoe and the ground. The players and athletes have to run fast. Greater friction is required between the soles of their shoes and ground to prevent slipping. To increase friction, Spikes are provided in the soles of shoes worn by players and athletes. This prevents the slipping of player or athlete on running.

7. Iqbal has to push a lighter box and Seema has to push a similar heavier box on the same floor. Who will have to apply a larger force and why?

Friction force is directly proportional to mass. Force of friction arises because of interlocking of irregularities on the two surface in contact. When a heavy object is placed, the interlocking of irregularities on the surface of box and floor become strong because two surfaces in contact are pressed harder. Hence more force is required to overcome the interlocking. Thus, to push heavier box, Seema has to apply a greater force than Iqbal.

8. Explain why sliding friction is less than static friction.

The maximum frictional force present between any two objects when one object just tends to move or slip over the surface of the other object ,is called static friction.

The frictional force present when one object moves slowly or slides over the surface of another object is known as sliding friction.

When irregularities present in the surfaces of two objects in contact get interlocked with each other, friction came into play.  The time given in sliding for interlocking is very small. Thus, interlocking is not strong. Therefore, less force is required to overcome this interlocking. Due to this reason, sliding friction is less than static friction.

9. Give examples to show that friction is both a friend and a foe.

1) Friction enables us to walk without slipping

2) Friction enables a car to move on road without skidding

4)Friction enables us to write and draw on paper

6) Nails can be fixed in a wall due to friction

7) Friction enables us to light a matchstick

1)Friction wears away the soles of our shoes

2)The tyres of vehicles wear out gradually due to friction

4)Friction wears out the brake pads of vehicles gradually

6)Friction reduces the efficiency of Machines

10. Explain why objects moving in fluids must have special shapes.

Water exerts force of friction on object which move through them and opposite their motion. When an object moves through water, it pushes the water out of the way and the water pushes back on the object. This push of water on the moving object creates friction which tends to slow down the moving object. Drag is a kind of frictional force exerted by fluid which opposes the motion of an object through that fluid. Drag force acts in direction opposite to the direction of motion of the object. A body shape which offers very little resistance to the flow of air or water around it is called streamlined shape. The fluid friction or drag can be reduced or minimised by giving special shape called streamlined shape to the objects which move through fluids. When an object having a streamlined body shape moves very fast, then the fluid can flow past the moving objects smoothly, reducing the fluid friction or drag.