Question 1. What is the difference between a reflex action and walking?

Answer 1 A reflex action may be defined as a rapid, involuntary response to a particular stimulus. It does not involve any thinking process. For example: We immediately close our eyes when the bright light is focused.

Walking is a voluntary action. It is under our conscious control.

Question 2. What happens at the synapse between two neurons?

Answer 2 Synapse is a very small region that occurs between the last portion of axon of one neuron and the dendrite of the other neuron.

It acts as a one-way passage in which transmission of nerve impulse can takes place in one direction only.

When an electrical signal reaches the axonal end of one neuron it releases certain chemical substances that cross the synapse and move towards the dendritic end of next neuron generating another electrical signal.

Question 3. Which part of the brain maintains posture and equilibrium of the body?

Answer 3 (i) Cerebellum is a part of hind brain and plays an important role in maintaining posture and equilibrium of the human body.

(ii) The cerebellum receives information from the spinal cord, and other parts of brain and then controls motor movements. It co-ordinates voluntary movements such as posture, balance, co-ordination, and speech, resulting in smooth and balanced muscular activity. It is also important for learning motor behaviours.

Question 4. How do we detect the smell of an agarbatti (incense stick)?

Question 5. What is the role of the brain in reflex action?

Answer 5 Reflex action is controlled by spinal cord. Reflex actions are quick responses against a particular stimulus. It is an involuntary action which does not involve thinking.

For example: When we touch a hot object, we withdraw our hand immediately without thinking. The sensory nerves that detect the heat are connected to the nerves that move the muscles of the hand. Such a connection of detecting the signal from the nerves (input) and responding to it quickly (output) is known as reflex arc. Reflex arcs are formed in the spinal cord but the information is still sent to the brain. The brain doesn’t have a significant response to it. 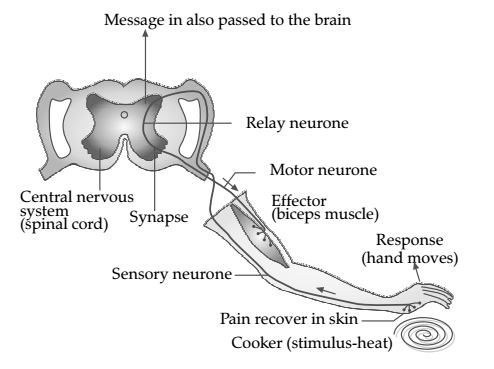 Question 1. What are plant hormones?

Answer 1 Plant hormones or phyto-hormones are naturally-occurring chemicals. These are synthesised in one part of the plant body in little amounts and are translocated to other parts when required.

Cytokinins are produced in growing areas of plants, and promote cell division and cell elongation in plants.

Abscisic acid is an inhibitory hormone. It promotes falling of fruits and flowers, and induces dormancy in seeds and buds.

Answer 2 The movement of leaves of the sensitive plant, Mimosa pudica or “touch-me-not plant”, occurs under the influence of touch or contact stimuli. Hence, its movement are touch sensitive and independent of growth. This is done by plant cells by changing the amount of water available in leaves.

The movement of shoot towards light is known as phototropism. This type of movement is directional and is growth dependent.

Question 3. Give an example of a plant hormone that promotes growth.

(i) Growth promoting plant hormone gibberellin, auxin, and cytokinin. (Any one)

(ii) Gibberellins and auxin help in the growth of the stem whereas cytokinin promotes cell division.

Question 4. How do auxins promote the growth of a tendril around a support?

Answer 4 (i) Tendril is a thread-like leafless organ of a climbing plant. These tendrils are sensitive to touch. Auxin, synthesised at the tip of the shoot, triggers the growth of tendril around a support.

(ii) Auxin increase in concentration in the part of the tendril which is away from the support. This results in increased cell division in that part.

Answer 5 The growth of plant parts towards or away from water is called hydrotropism. It is known that roots are positively hydrotropic in nature, i.e. they grow towards water in the soil.

Take a sieve or a trough with perforations at their bottom. Place few moist sawdust in it, then add some germinating seeds on the sawdust. Raise the trough above the surface by keeping a brick under each edge. After a few days you will see that radicles of the seedlings grow downwards through the pores due to geotropism. These radicles then grow towards the moist sawdust in the trough due to hydrotropism.

Question 1. How does chemical coordination take place in animals?

Answer 1 (i) Chemical co-ordination takes place in animals with the help of hormones.

(ii) Hormones are the chemical fluids (mainly composed of protein or sterol lipids) that are secreted by the endocrine glands.

(iii) Hormones travel through the bloodstream to tissues and organs, and control most of our body’s major systems and regulate the physiological processes in living organisms.

For example: insulin secreted from pancreas, simplifies the passage of glucose into all body cells for its use in energy metabolism and thyroxin regulates the overall body metabolism.

Question 2. Why is the use of iodised salt advisable?

Question 3. How does our body respond when adrenaline is secreted into the blood?

Answer 3 Adrenaline is a hormone secreted by the adrenal glands in case of extreme stress or emergency situations. It is secreted directly into the blood and is transported to different parts of the body.

(ii) When secreted in large amounts, it speeds up the heartbeat and hence supplies more oxygen to the muscles. The breathing rate also increases due to contractions of diaphragm and rib muscles. It also increases the blood pressure. All these responses enable the body to deal with any stress or emergency.

Question 4. Why are some patients of diabetes treated by giving injections of insulin?

Answer 4 (i) Diabetes is a disease in which level of sugar in blood is too high. Insulin, a hormone secreted by the pancreas, helps in regulating the blood sugar levels.

(ii) Insulin converts extra sugar of blood into glycogen. This is the reason why diabetic patients are treated by giving injections of insulin.

Question 1. Which of the following is a plant hormone?
(a) Insulin
(b) Thyroxin
(c) Oestrogen
(d) Cytokinin.

Cytokinin is a plant hormone. It is primarily involved in performing cell division in plant roots, shoot system. Insulin, oestrogen, and thyroxine are animal hormones secreted from pancreas, ovary, and thyroid gland, respectively.

Synapse is a junction or gap across which a nerve cell can send an impulse to another neuron. Dendrite and axon are parts of neuron. Impulse is the signal that travels along the length of a nerve fibre and ends in the release of neurotransmitters.

Question 3. The brain is responsible for
(a) thinking.
(b) regulating the heart beat.
(c) balancing the body.
(d) all of the above.

Question 4. What is the function of receptors in our body? Think of situations where receptors do not work properly. What problems are likely to arise?

1) They provide information about the external environment. Receptors sense the external stimuli such as heat, pain, touch, etc. and receive their chemical signal. When such chemical signals bind to a receptor, they cause some form of cellular/ tissue response.

2) It also activates an impulse in the sensory neuron which sends message to the spinal cord.

When the receptors are damaged, the external stimuli-transferring signals to the brain are not felt.

For example: In the case of damaged receptors, if we accidentally touch any hot object, then our hands might get burnt as damaged receptors cannot perceive the external stimuli of heat and pain.

Question 5. Draw the structure of a neuron and explain its function.

1) Neuron or nerve cells is the structural and functional unit of nervous system. These specialised cells are the information-processing units of brain and responsible for receiving and transmitting information. 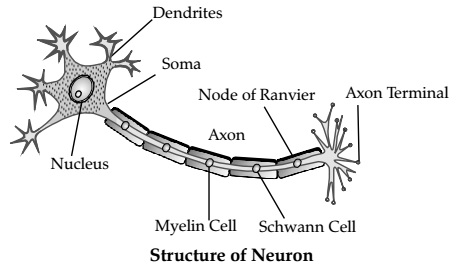 2) A neuron has three basic parts: the dendrites, the cell body, and the axon.

(a) Dendrites: They are tree-like extensions that help increase the surface area of the cell body. These tiny protrusions receive information from other neurons and transmit electrical stimulation to the soma.

(b) Cell body: It is also called as soma. It is mainly concerned with the maintenance and growth of the neuron. It contains numerous organelles involved in a variety of cell functions.

Question 6. How does phototropism occur in plants?

Answer 6 The movement of plant in response to light is called phototropism. Positive phototropism is seen in shoots which respond by bending towards light.

Stem shows positive phototropism. When growing plants detect light, auxin hormone, synthesised at the shoot tip, helps the cells to grow longer. When light is coming from one side of the plant, auxin diffuses towards the shady side of shoot. This concentration of auxin stimulates the cells to grow longer on the side of the shoot which is away from light. Thus, the plant appears to bend towards light.

Question 7. Which signals will get disrupted in case of a spinal cord injury?

Question 8. How does chemical coordination occur in plants?

Answer 8  Animals have a nervous system for controlling and coordinating the activities of the body. But plants have neither a nervous system nor muscles. Plants respond to stimuli by showing movements. The growth, development, and responses to the environment in plants is controlled and coordinated by plant hormones. These hormones are produced in one part of the plant body and are translocated to other needy parts.

These phyto-hormones are either growth promoters (such as auxins, gibberellins, cytokinin, and ethylene) or growth inhibitors such as abscisic acid.

Question 9. What is the need for a system of control and coordination in an organism?

Answer 9 (i) The maintenance of the body functions in response to changes in the body by working together of various integrated body systems is known as co-ordination.

All the movements that occur in response to stimuli are carefully coordinated and controlled. In animals, the control and co-ordination movements are provided by nervous and muscular systems.

(ii) The nervous system sends messages to and away from the brain. The spinal cord plays an important role in the relay of messages. In the absence of this system of control and co-ordination, our body will not be able to function properly, for example, when we accidentally touch a hot utensil, we immediately withdraw our hand. In the absence of nerve transmission, we will not withdraw our hand and may get burnt.

Question 10. How are involuntary actions and reflex actions different from each other?

Answer 10 Involuntary actions cannot be consciously controlled. It is the set of muscle movement which do not require thinking.

For example: We cannot consciously control the movement of food in the alimentary canal or pumping of blood through heart. These actions are controlled with the help of brain.

On the other hand, the reflex actions such as closing of eyes immediately when bright light is focused show a spontaneous response and do not involve any thinking. This means that unlike involuntary actions, the reflex actions are not under the control of brain.

Question 11. Compare and contrast nervous and hormonal mechanisms for control and coordination in animals.

Question 12. What is the difference between the manner in which movement takes place in a sensitive plant and the movement in our legs?