(i) Which two of the following extreme locations are connected by the eastwest corridor?

(ii) Which mode of transportation reduces transshipment losses and delays?

(iii) Which one of the following states is not connected with the H.V.J. pipeline?

(iv) Which one of the following ports is the deepest landlocked and well protected port along the east coast?

(v) Which one of the following is the most important modes of transportation in India?

Question 2 Answer the following questions in about 30 words.

(i) State any three merits of roadways.

(ii) Where and why is rail transport the most convenient means of transportation?

(iii) What is the significance of the border roads?

(iv) What is meant by trade? What is the difference between international and local trade?

Answer 2 (i) Three merits of roadways are:

(a) Construction cost of roads is much lower.

(b) It provides door to door services thus the cost of loading and unloading is much lower.

(c) It is used as feeder to other modes of transport. To reach any destination be it railway station, sea port or airport, one needs to travel through roads.

(iii) The significance of border roads:

(a) Border roads have improved accessibility in areas of difficult terrain.

(b) They have helped in the economic development of these areas.

(iv) The exchange of goods among people, states and countries is referred to as trade. Trade between two or more countries is termed as international trade but trade which occurs in a region within the same country is called local trade.

(i) Why are the means of transportation and communication called the lifelines of a nation and its economy?

(ii) Write a note on the changing nature of the international trade in the last fifteen years.

Answer 3 (i) The development of a country depends upon the production of goods and services as well as their finished products reach to the consumer. Transport has helped in both production and distribution of goods. Hence, efficient means of transport are prerequisites for fast development. India is well-linked with the rest of the world despite its vast size, diversity and linguistic and sociocultural plurality. Railways, airways, water ways, news papers, radio, television, cinema and internet, etc. have been contributing to its socio-economic progress in many ways. The trades from local to international levels have added to the vitality of its economy. It has also enriched our life and added substantially to growing amenities and facilities for the comforts of life. Hence, it is right to say that means of transportation and communication are the lifelines of a nation and its economy.

The agricultural and allied products—2.53%

India has trade relations with all the major trading blocks and all geographical regions of the world.

1. Northern terminal of the North-south corridor.

3. The headquarter of the southern railway zone.

5. The southern terminal of the National Highway No. 7.

Start your search vertically, horizontally or diagonally and reach various destinations across the countries! 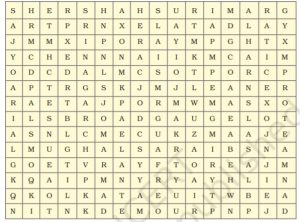 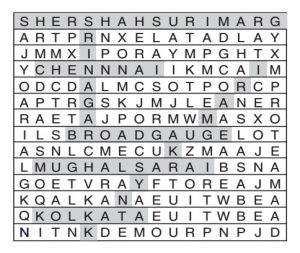