Question 1. Fill in the blanks:

(a) Production of new individuals from the vegetative part of parent is called vegetative propagation.

(b) A flower may have either male or female reproductive parts. Such a flower is called unisexual flower.

(c) The transfer of pollen grains from the anther to the stigma of the same or of another flower of the same kind is known as pollination.

(d) The fusion of male and female gametes is termed as fertilisation.

Question 2. Describe the different methods of asexual reproduction. Give examples.

Answer 2 The different methods of asexual reproduction are :

1) Vegetative propagation: The new plant are produced from the parts of old plants(like stems, roots or leaves).It involves the growth and development of one or more buds on the old part of the plant to produce a new plant.Some of the plants which are usually reproduced by the method of vegetative propagation are rose, potato, ginger, turmeric, sweet potato, mint, sugarcane.

2) Budding: In budding, a small part of the body of the parent plant grow out as a bulb like projection called bud which then detaches and becomes a new plant.

3) Fragmentation: The breaking up of the body of a plant into two or more pieces on maturing , each of which subsequently grows to form a new plant, is called fragmentation.The green patches on the lakes or water bodies are due to the growth of plant like organism called algae.They reproduce by this method.

For Ex: Most of the fungi, flowerless plants, bread mould plant or rhizopus.

Question 3. Explain what you understand by sexual reproduction.

Answer 3 When two parents are involved in reproduction, the method is called sexual reproduction. The male and female gametes fuse during fertilization to produce zygote. The zygote subsequently develops into an embryo which further develops into a new individual.

Question 4. State the main difference between asexual and sexual reproduction.

Question 5. Sketch the reproductive parts of a flower.

Answer 5 Pistil is the female reproductive organ of a plant. 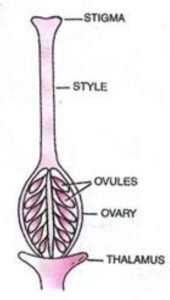 Stamen is the male reproductive organ of a plant 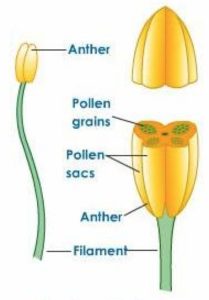 Question 6. Explain the difference between self-pollination and cross-pollination.

Question 7. How does the process of fertilisation take place in flowers?

Question 8. Describe the various ways by which seeds are dispersed.

Answer 8 The various ways by which seeds are disperse are:

1) Dispersal by Wind: Seeds of some plants are light-weight and have wing-like structures  present on them. Such seeds float on air and are thus dispersed by wind.

2) Dispersal by Water: Dispersal by water takes place in some aquatic plants and in some which grow near a water body.

Seeds of water lily float and thus dispersed by water.

3)Dispersal by Animals: Some seeds have spine like structures on them. They get stuck to the fur of animals and thus get spread to different places.

Examples: Beggar tick, Xanthium, etc. Some seeds are swallowed by birds and animals along with fruits. These seeds get dispersed with bird or animal droppings.

4) Dispersal by Bursting: Some fruits burst open when they mature. The force of bursting is enough to spread the seeds.

(a) The reproductive part of a plant is the

(d) A spore producing organism is

(e) Bryophyllum can reproduce by its