Question 1 What is the main cause of wind movements on the surface of the earth?

Question 3 Explain how winds are produced by uneven heating on the earth between the equator and the poles not blow in the exact south-north direction?

Question 5 Explain why when we blow air in the space between two inflated balloons  and hanging about 10 cm apart on a stick, the two balloons come closer?

Question 6 A small paper ball is kept in the neck of a glass bottle held horizontally? Explain  why, it is difficult to force the paper ball by blowing air into the bottle?

Question 7 What would happen if high speed winds blows over a house having weak tin roof?

Question 8 What are monsoon winds?

Question 11 Why monsoon winds are very important for our country?

Wind is the movement of air which depends on the difference in air pressures (or atmospheric pressures) in the two regions.

Uneven heating on the earth in different regions is the main cause of wind movements.

As a region gets more and more away from the equator (towards the poles), the amount of sun’s heat received by the region goes on decreasing gradually leading to less hot climates (or cooler climates).

The uneven heating on the earth (which produces winds) can take place under two situations:

(1) Uneven heating between the equator and poles of the earth, and

(2) Uneven heating of land and water of oceans.

The winds produced by the uneven heating of the earth between the equator and the poles do not blow in the exact north-south direction because a change in the direction of winds is caused by the rotation of the earth on its axis.

During winter, land cools down faster than the water in oceans. So, the temperature of water in oceans is higher than that of land. The warm air over the oceans rises up creating a region of low pressure and cooler air from the land rushes towards the ocean. This causes wind to blow from land towards the oceans. The winds coming from colder land regions (or colder winds) carry only a little of water vapour and hence bring only a small amount of rain in winter season.

Take two balloons of equal size. Fill a little water into both the balloons (to make them slightly heavier) .Inflate both the balloons by filling air into them with mouth (or pump) and tie their mouths properly with strong threads. Hang the two inflated balloons about 10 cm apart on a stick with the help of threads tied to their mouths.

The wind speed is measured by an instrument called anemometer. 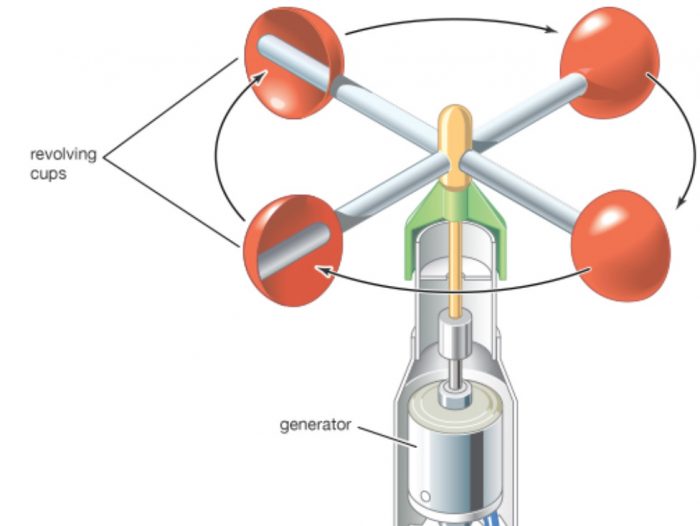 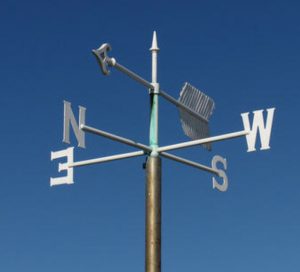 High speed winds can be destructive

Wind plays an important role in the formation of thunderstorms, cyclones and tornadoes which can cause disasters.

A period of violent weather with strong winds, and usually rain (or snow), is called a storm. A storm affects the surface of earth and all the objects on it.

A natural flow of high voltage electricity within a cloud (or between a cloud and earth) which appears as a bright flash of light in the sky, is called lightning. For a cloud to become electrically charged and produce lightning, its temperature must be close to the freezing point of water.

The loud sound which is heard a little after a lightning flash is seen in the sky is called thunder. The high voltage electric spark of lightning heats the air in the atmosphere to a very high temperature. This extreme heating causes the air to expand at an explosive rate producing a loud sound called thunder.