Question 1 Why holes are made in hanging banners and hoarding?

Question 2 Why does the air filled in a bicycle tube keep it tight?

Question 4 Why when air is filled into a balloon, the balloon gets inflated?

Question 5 Why do the leaves of trees, flags and banners flutter when the wind is blowing?

Question 6 Why is it easier to row a boat if there is wind coming from behind you?

Question 7 When you fly a kite, the wind coming from your back helps you? Explain?

Question 8 Define the term expansion of air and contraction of air?

Question 9 How will you show that air expands on heating?

Question 11 Why smoke always rise up?

Question 12 Why a house must have windows as well as ventilators?

Question 13 Why is it difficult to ride a bicycle against the direction of a wind?

Air is a mixture of colourless gases.

The layer of air above the earth is called atmosphere.

The continuous physical force exerted on an object (or against an object) by something in contact with it, is called pressure. Air exerts pressure in different ways under different situations.

(1) Air enclosed in a container (like a balloon or bicycle tube) exerts pressure,

(2) Air in the atmosphere around us exerts pressure, and

Air is made up of tiny particles called molecules which move around quickly in all directions. 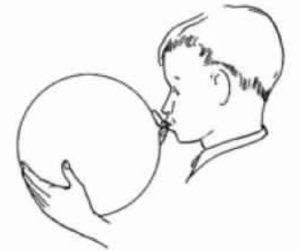 Activity: Air around us exerts pressure 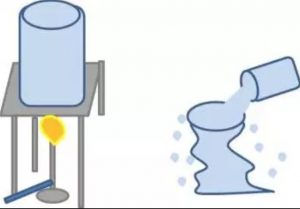 1) Take a tin can and put some water in it. Heat the tin can by using a burner to boil the water so that steam is formed.

2) This steam expels all the air from inside the tin can so that when water is boiling, there is no air inside the can, the whole can is filled with steam.

3)A tight cork is now fitted in the mouth of the tin can and heating is stopped. We now pour cold water from a tap on the hot tin can.

4) On pouring cold water, the tin can collapses inwards as if a large force acting on it from outside has crushed it.

When the water is boiling, steam is formed in the tin can. Steam has pressure. The steam pressure acting from inside the tin can balances the air pressure (or atmospheric pressure) acting on all the sides of the tin can from outside and hence the tin can does not get crushed.

When a tight cork is put on the mouth of the tin can containing steam and then cold water is
poured over it, then the hot steam inside the tin can gets cooled, condenses and forms water and water vapour at very low pressure. On cooling, the pressure inside the tin can decreases too much and it cannot balance the large air pressure acting on the tin can from outside.

(1) It is due to the pressure exerted by moving air (or wind) that the leaves of trees, flags and banners flutter when the wind is blowing.

Holes are usually made in hanging banners and hoardings so that high speed wind may pass through them easily without damaging them or bringing them down with its huge force or pressure.

When air is heated, its volume increases and it occupies a bigger space. We say that air expands on heating.

(2) Take some hot water in a beaker. Place the boiling tube (having rubber balloon fixed to its neck) in the hot water in the beaker. After 2-3 minutes we will see that the balloon gets inflated (as if someone has filled air in it).

If we take out the boiling tube from hot water and allow it to cool, then after some time, the balloon will get deflated . This is because the air present in boiling tube and balloon contracts on cooling due to which its volume decreases and balloon gets deflated.

Hot air is lighter than cold air.When air gets heated at a place, it expands, becomes lighter and rises up in the sky. 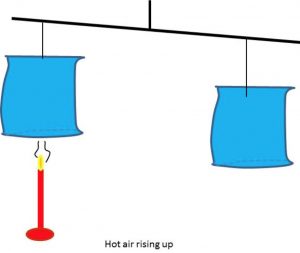 (2) Put a burning candle below the open mouth of the left side paper bag. We will see that after some time, the left side of the wooden stick goes up showing that it has become lighter than the right side.

A white, grey or black substance (formed of small particles) emitted from a burning substance is called smoke. Smoke always rises up. Since warm air is lighter (than cold air), therefore, smoke contained in warm air always rises up. The air inside a house gets warmed by the body heat of all the persons living in the house and also by the burning of fuels (LPG, etc.) in the kitchen.

When air at a place gets heated and rises up ,then the pressure at that place is lowered (or reduced).The cold air from the surrounding areas (being at higher pressure) rushes in to fill the space vacated by hot rising air.