You are here: Home / Class 7 / Science / Weather, Climate and Adaptations of Animals to Climate / Adaptations

Question 1 What is meant by adaptation?

Question 2 How polar bear is adapted to live in extremely cold polar regions having snow all around?

Question 5 State few adaptation in elephant which help in their survival?

Question 6 State few adaptation in big cats which help in their survival?

Question 7 State the adaptations of red eyed frog which helps it to climb on trees on which it lives?

Question 8 How monkeys are adapted to live on trees?

Question 9 How toucan are adapted to survive on trees?

Question 10 State the adaptations in lion-tailed macaque which help it to live and survive on trees in tropical rainforest?

Question 11 How is penguin adapted to live and survive in polar regions?

Question 12 What is meant by migration of birds? Why do they migrate?

Question 14 Why tropical rainforest support a wide variety of plants and animals?

Question 15 Why does Siberian crane come from Siberia every year for few months?

A living organism can survive in a particular habitat only if its body is suited (or adapted) to the climate of that habitat. Animals and plants develop special features in their body or develop certain habits to survive in their habitats (or surroundings).

The presence of specific body features (or certain habits) which enable an animal or a plant to live in a particular habitat (or surroundings) is called adaptation.

The body features and habits that help animals (and plants) to adapt to their particular habitats or surroundings are a result of the process of evolution.

Adaptation can help animals to survive in their environment by enabling them to withstand climate (such as extreme cold or hot climate), to obtain food, to hide to keep safe or catch prey, or to breathe, etc.

Tropical rainforests are thick forests which grow near both the sides of the equator of earth where the climate is very hot and humid, and rainfall is high. Some of the countries where tropical rainforest are found are India, Malaysia, Indonesia, Brazil, Republic of Congo, Kenya, Uganda and Nigeria.

The polar regions and the tropical regions are the two regions of the earth which have severe climatic conditions.

1) The polar regions are covered with ice and snow, and it is extremely cold for most part of the year.

3) The animals living in the polar regions have adapted to the extremely cold climate by having some special features such as white colour, thick layer of fur, thick skin, a layer of fat under the skin, strong sense of smell, and big feet (big paws) for walking on soft snow and swimming, etc.

The polar bear is a large, white bear which lives in north polar regions of the earth. The polar bear feeds mainly on fish and seal.

1) Polar bear has white colour which matches with its surroundings: Due to white colour, polar bear is not visible easily in the snowy white background and hence its prey is unable to see it. This adaptation (of white colour) helps the polar bear to catch its prey. The white colour of polar bear also protects it from its predators.

3) Polar bear has a thick layer of fat under its skin: This layer of fat insulates the body of polar bear against heat loss and keeps it warm in cold climate.

4) Polar bear has a rounded body and small ears to keep the body surface area to a minimum.This reduces the heat loss from the body of polar bear.

5) Polar bear has big feet (or big paws) to spread the weight of its body on snow which prevent it from sinking into snow and make it walk on snow easily. Polar bear has long, curved and sharp claws which help it to walk and run on slippery ice.

Penguin is an animal which lives in extremely cold south polar region of the earth. Penguins hunt for fish which they eat as food.

1) Penguin is black and white in colour but still it merges well with the white background of ice and snow.

2) Penguin has thick skin and a layer of fat below its skin which protect it from extreme cold.

3) Penguins live together in large numbers. Penguins huddle together to keep themselves warm.

4) Penguin has streamlined body, flipper-like wings and webbed feet which make it a good swimmer.

Some other animals which live in polar regions are Musk oxen, Reindeers, Arctic foxes, Seals, Whales, many kinds of Fish and Birds.

The process in which a bird (or other animal) moves from one place to another in one season and returns again in a different season is called migration. Migration of birds (or other animals) is an adaptation to escape the harsh and cold conditions of their normal habitat in winter so as to survive.

The birds which migrate from very cold regions to warmer regions in winter and go back after the winter is over, are called migratory birds. One of the most common migratory bird which comes to India every year for a few months is the Siberian crane. When winter sets in Siberia, and it gets extremely cold, the Siberian crane flies thousands of kilometres and comes to warmer places in India such as Bharatpur in Rajasthan, Sultanpur. The Siberian cranes fly back to Siberia when the winter ends there and climate becomes favourable.

The migratory birds usually fly high up in the sky where the wind flow is helpful and low temperature aids in dispersing the heat generated by the constant working of their flight muscles in flapping the wings.

Reindeer is a mammal which migrates. Reindeers live in herds in the cold, northern regions of North America where they feed on grass and shrubs in the summer. During winter, when the snowfall occurs, all the grass and shrubs get buried in snow and reindeers do not get any food. Due to this, reindeers migrate to the warmer regions in the south where they get sufficient food. They return to the original habitat in the north after a few months when the snow starts melting.

Some of the adaptations in animals living in tropical rainforests are:

1) A skin colour which helps them to camouflage (mix up with the surroundings and hide) in order to catch prey or protect themselves from predators.

3) Development of trunk, tusks, and large ears and feet.

7) Development of strong, and gripping tails

10) Living on diet of fruits

The wild animals such as lions and tigers, etc, are called big cats. The big cats are carnivores which eat only the meat (or flesh) of other animals

1)The big cats (lion and tiger) have a highly developed sense of smell which helps them to locate their prey (and kill for obtaining food). Big cats also have sensitive hearing. This also helps to find their prey.

3)The big cats have eyes in front of their head which enable them to have a correct idea of the location of their prey. This helps in catching the prey.

4) The big cats can run very fast. The high speed of running helps the big cats in catching their prey.

5) The big cats have long, strong and sharp claws in their front legs to catch their prey.

6) The big cats have powerful teeth and jaws to kill large prey.

2) Tusks: Tusks are the big and long pointed teeth which come out from the closed mouth of the elephant . Tusks are the modified teeth of elephant. Tusks are actually the incisor teeth of elephant. Elephant uses the tusks to tear off the bark of trees which it eats as food. An elephant has two tusks and four teeth. The elephant’s four teeth are inside the mouth. The elephant’s four teeth are molars. Elephants also use the tusks for fighting their enemies and protecting themselves.

3) Large ears: Due to large ears, an elephant can hear even the slightest sound made by its predator behind him so that it can sense the danger and run away to safety. The large ears also help the elephant to keep cool in the hot and humid climate of the tropical rainforest.

4) Heavy weight: The elephant’s feet are large and round. The large and round feet give good stability to the elephant and also prevent it from sinking into soft ground (by spreading its weight over a larger area)

Some of the animals which are adapted to live on the trees are: Red-eyed frogs, Toucans, Monkeys, and Lion-tailed macaques. 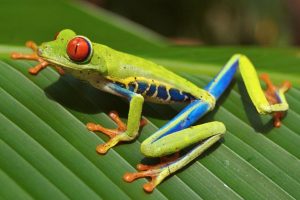 Red-eyed frog lives on the trees in the tropical rainforests, so it is also called red-eyed tree frog. The red-eyed frog has a green back and a creamy underside It has big and bulging bright-red eyes. It sleeps during the day and becomes active and feeds mainly at night.

2) The big and bulging bright-red eyes of this frog are an adaptation for protection. If a  predator wakes up the sleeping red-eyed frog during daytime, its big and bright red eyes pop open suddenly. The sudden opening of big and bright-red eyes frightens the predator for a while and the frog gets time to jump to a safe place.

3) The green colour of red-eyed frog helps it to hide within the green leaves of the tree unnoticed by its prey.

4) Red-eyed frog has very good eye-sight which helps it to see very clearly at night.

5) Red-eyed frog is a carnivore and eats any type of insects as food. 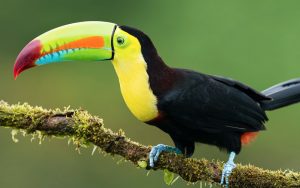 The animal which is adapted to get food from the fruits attached at the ends of even very thin branches is ‘toucan. Toucan is a colourful bird with a strange looking beak .Toucan’s beak is long and large. It has brightly coloured feathers. It spend most of the time in the holes of big trees. Toucan eats fruits of the trees.

3) Toucan has the ability to change the colour of its feathers in order to blend (or mix up) with the surroundings. Due to this adaptation, toucan is not noticed easily by the predators and hence remains safe.

1) Monkeys are expert climbers. The hands and feet of monkeys are adapted in such a way that they can easily hold on to branches of trees.

2) Monkeys have long and strong gripping tails which they use for grasping branches of trees.

2) The lion-tailed macaque has very good eyesight which helps it in leaping between the branches. This adaptation is useful in moving from one tree to another in search of food and also to escape from predators.