You are here: Home / Class 7 / Science / Transportation in Animals and Plants / Transport In Humans

Question 2 What is the function of platelets in body?

Question 3 What is blood? Name the components of blood?

Question 4 Why transport of materials necessary in plants and animals?

Question 5 Why is blood needed by all the parts of our body?

Question 6 What is heart? Describe the function of heart?

Question 8 How does food and oxygen reach all the parts of our body?

Question 9 What is a heartbeat? Name the instrument used by doctors to listen to our heartbeat?

Question 10 Explain why the heart beat faster during and after an exercise?

Question 11 What is stethoscope? name its various parts?

Question 12 What is pulse? what is the pulse rate of an adult person while resting?

Question 13 How do food, oxygen , carbon dioxide and other materials transported in animals such as hydra and sponges?

Question 15 Which side of heart pumps

(a) blood into the lungs

(b) blood into the body organs

Transport is a life process in which a material absorbed (or made) in one part of the body of an organism is carried to other parts in its body.

All the living organisms (animals and plants) need a continuous supply of different materials such as food, water and oxygen for their survival. These materials must reach the various parts of an organism where they are needed.

All the living organisms also produce some waste materials like carbon dioxide as a result of chemical processes occurring in their body cells. These waste materials are harmful and have to be removed from the body.

All the living organisms (animals and plants) need a transport system to supply them with food, water and oxygen, and to carry away the harmful waste materials produced in their bodies.

In most of the animals, the blood that circulates in their body transports (or carries) food, water and oxygen to cells in all the parts of their body. The blood also transports the waste materials made in the body cells to different parts of the body for excretion (or removal).

In the circulatory system, blood carries digested food, water and oxygen to all the parts of the body. It also takes away the waste products like carbon dioxide made in the body cells.

Blood is a red coloured liquid which flows in blood vessels and circulates in our body. Blood is red because it contains a red pigment called haemoglobin. Blood has many different cells which perform different functions. Blood consists of four components : plasma, red blood cells, white blood cells and platelets.

Plasma is a liquid and red blood cells, white blood cells and platelets keep floating in it.

The blood is able to transport various substances in the body due to the presence of different components in it.

The four components of blood and their functions

Platelets are the tiny fragments of special cells formed in the bone marrow. Platelets help in the clotting of blood in a cut or wound. When a cut or wound starts bleeding, then platelets clot the blood (make the blood semi-solid) due to which further bleeding stops.

If a child falls down while playing a game and his knee (or any other body part) gets injured, then blood starts flowing from the cut made by the injury. After some time, however, a dark red clot is formed which plugs the cut and bleeding stops. The blood clot (which stops bleeding) is formed due to the presence of the cells called platelets in the blood.

(1) Blood carries digested food from the small intestine to all the parts of the body.

(2) Blood carries water to all the parts of the body.

(5) Blood carries a waste product called urea from the liver to the kidneys for excretion in urine.

(6) Blood protects the body from diseases. 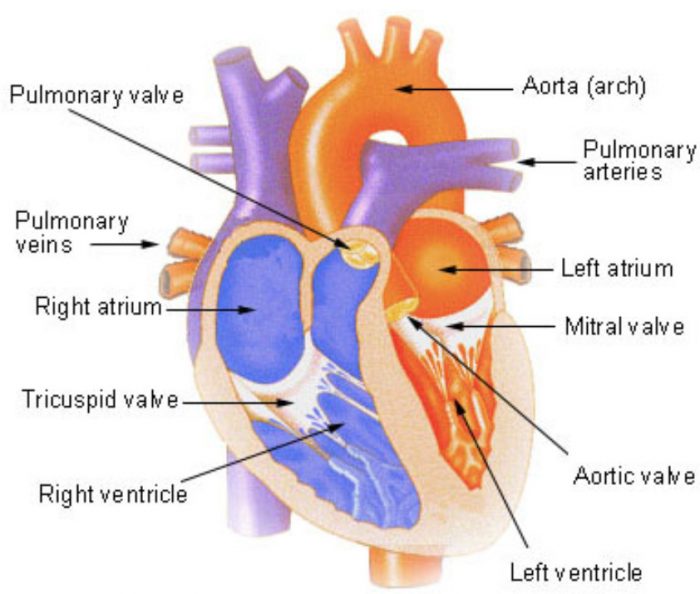 The heart is an organ which pumps blood to all the parts of our body through a network of tubes called blood vessels. The heart works like a pump non-stop throughout our life.

(1) Our heart is located in the chest cavity slightly towards the left side.

(2) The heart lies between the two lungs and above the diaphragm.

(3) The size of our heart is roughly equal to our fist.

(4)The heart is made of special muscle called cardiac muscle. The heart is hollow inside.

(12) A sheath of tissue called ‘pericardium’ protects the heart. All the atria and ventricles of the heart contract and relax (expand) at appropriate times and make the heart behave like a pump.

Blood vessels are a kind of tubes (or pipes) which carry blood throughout our body.There are three types of blood vessels in the body: arteries, veins and capillaries.

Arteries are the blood vessels which carry blood from the heart to all the parts of the body. The arteries lie quite deep under our skin and hence they are not seen easily. Blood leaves the heart at high pressure through arteries. The arteries have thick and elastic walls. This is because blood flows through them at high pressure. The thick and elastic walls of arteries can withstand the high pressure of blood flowing through them. The main artery (called aorta) is connected to the left ventricle of the heart.

One artery called pulmonary artery carries deoxygenated blood (rich in carbon dioxide) from the heart to the lungs.

Veins are the blood vessels which carry blood from all the parts of the body back to the heart. The veins are less deep than arteries and hence can be seen easily. The greenish-blue lines which we see just below the skin on our hands and legs are the veins. The deoxygenated blood returns to the heart at low pressure through the veins. Since the blood flows at low pressure through the veins, so the veins have thin walls. Veins have valves in them which allow the blood in them to flow in one direction only towards the heart. The valves prevent the back flow of blood in veins.

Capillaries are the extremely thin blood vessels which connect arteries to veins. Every cell of the body is near a capillary.

The capillaries have extremely thin walls which allow substances to pass from blood into the body cells, and also from body cells into the blood.

Thus, the exchange of substances (like food, oxygen, carbon dioxide, etc.) between the blood and the body cells takes place through capillaries. The other ends of capillaries are joined to veins. The deoxygenated blood (containing waste products like carbon dioxide) coming from the capillaries enters into veins and carried back to the heart.

Working of the Circulatory System

The blood is circulated in the human body by the rhythmic (regularly occurring) contractions and relaxation of heart muscles which make up the atria and ventricles.

(1) When blood passes through the capillaries of the lungs, then oxygen from air enters into blood and we get oxygenated blood

(3) When the left ventricle contracts, it pumps oxygenated blood into the main artery.This main artery then branches into many smaller arteries which go into different body organs.

(4) The arteries carry oxygenated blood to all the organs (or parts) of the body like head, chest, arms, stomach, intestines, liver, kidneys, trunk and legs.

(7) When the right atrium contracts, the deoxygenated blood is pushed into right ventricle.

(8) When the right ventricle contracts, it pumps deoxygenated blood (rich in carbon dioxide) into the lungs.

(9) In the lungs, deoxygenated blood gives out the waste product carbon dioxide and absorbs fresh oxygen from the air being breathed in. So, the blood becomes oxygenated again.

(10) The oxygenated blood is again sent by the lungs to the left side of the heart for circulation in the body once again. This process is repeated continuously, all day and all night, even when we are asleep.

In this way, the blood keeps on circulating in the body without stopping due to which all the parts of the body keep on getting digested food, oxygen and other materials all the time. At the same time, blood circulation keeps on removing waste products like carbon dioxide formed in the body cells.

The circulation of blood was discovered by an English physician named William Harvey.

The heart pumps blood into arteries by contracting. When the heart contracts, it becomes smaller in size and pushes the blood into main artery with a great force. Then the heart relaxes (comes back to its original size) and gets filled up with blood from pulmonary vein. The heart keeps on contracting and relaxing again and again to pump blood into the body continuously.

One complete contraction and relaxation of the heart is called a heartbeat.

The average heartbeat of an adult person while resting is 72 to 80 per minute. This is called the heart rate. We can feel our heartbeats if we place our hand on the left side our chest just above the heart region. The number of heartbeats increase too much during and after a physical exercise or when a person is excited.

The faster beating of heart pumps blood more rapidly to the body organs which supplies more oxygen to the body cells for rapid respiration to produce more energy. The increase in number of heartbeats caused by exercise, excitement, fear or nervousness, however, lasts for a short time after which it becomes normal.

A doctor listens to our heartbeats with the help of an instrument called stethoscope. The stethoscope amplifies (makes louder) the sound of heartbeats so that the doctor can hear the heartbeats clearly.

A stethoscope consists of three parts :

(1) A chest piece (which carries a sensitive diaphragm at its bottom). The diaphragm amplifies the sounds of heartbeats.

(2) Two ear pieces (which are made of two metal tubes). These are put by the doctor into his ears.

A stethoscope is used to hear clearly the heartbeats by placing the chest piece over the heart region of chest. The diaphragm amplifies the sounds of heartbeats coming from within the body and the rubber tube and ear pieces transmit these sounds to the ears of the doctor. Doctors can get clues about the condition of our heart by listening to the heartbeats through the stethoscope.

The expansion of an artery each time the blood is forced into it, is called pulse.

Each heartbeat generates one pulse in the arteries, so the pulse rate of a person is equal to the number of heartbeats per minute.

(3) In sponge and hydra, the  water also carries away carbon dioxide and other waste materials as it moves out of their bodies.

(4) Amoeba and Paramecium are also tiny animals which live in water and do not have blood in them.