You are here: Home / Class 7 / Science / Transportation in Animals and Plants / Excretion In Animals

Question 1 What is meant by excretion?

Question 2 What are the various materials excreted from the human body?

Question 3 Why is it necessary to excrete waste products?

Question 4 What are the various organs of the human excretory system?

Question 5 Draw a diagram of the human excretory system ?

Question 6 What is dialysis? What type of patients are put on dialysis machine?

Question 7 What happens when the the kidney of a person stop working?

Question 8 What does the sweat contain? What are the functions performed by sweating in human beings?

Question 9 Explain why some white patches are formed on our clothes during summer?

Question 10 How do aquatic animals excrete their cell waste?

Question 11 How do land animals like birds, snakes, insects excrete their cell waste?

The removal of waste materials produced in the cells of the living organisms is called excretion.

The various waste materials produced in the cels of the human body are : Carbon dioxide, Urea and Sweat.

The organs for the removal of waste materials in the human body are : Lungs, Kidneys and Sweat glands.

2) Urea is produced as a waste product by the decomposition of unused food proteins in the liver. Urea is removed from the blood by kidneys. kidneys are the main excretory organs in our body.

Urea is a poisonous substance which must be removed. If the urea and other wastes are not removed from the blood of a person constantly, the person will soon die. Our kidneys remove urea, excess water and other unwanted salts from our blood.

3) Sweat is a liquid waste of the body produced by sweat glands present in our skin. Sweat contains water, some salts and a little of urea. Sweat is removed from the body by sweat glands through the skin. We sweat a lot on a hot summer day. When sweat evaporates

from our body, it takes the heat required for evaporation from our body. In this way, our body loses heat and makes us feel cool.

(1) Sweating helps to remove excess water, some salts and a little of urea as liquid waste from the body. 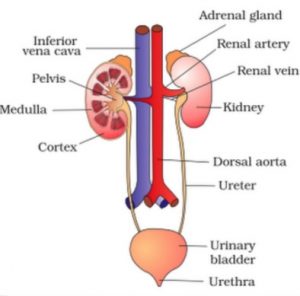 Urea is a major waste product produced in our body. The urea and other unwanted salts dissolve in water in the body to form a yellowish liquid waste called urine. The excretory system collects the liquid wastes of the body (like urine) and helps get rid of them.

The excretory system of human beings consists of the following organs : two kidneys, two ureters, a bladder and a urethra.

1) The kidneys are bean-shaped towards the back of our body just above the waist. Every person has two kidneys. The decomposition of unused food proteins in the liver produces urea as waste. This urea goes into blood. The blood in our body is constantly passing through our kidneys.

The function of kidneys is to filter the blood to remove urea. Each kidney contains thousands of tiny filters called nephrons. When the blood containing urea and other waste salts passes

through nephrons in the kidneys, the nephrons filter the blood and remove urea and other unwanted salts from it. The liquid left in the kidneys is a yellowish liquid called urine which contains urea, other waste salts and excess water.

2) The urine formed in kidneys goes into the bladder through the tubes called ureters. Urine is stored in the bladder .Bladder is also called urinary bladder.

the opening at the end of a tube called urethra.

Urine is a yellowish liquid which consists of

When the kidneys do not work properly, they are not able to remove the waste product urea from the blood. Complete failure of kidneys leads to the accumulation of too much urea in the blood of a person.

Urea is a toxic substance (or poisonous substance), so the accumulation of too much urea in the blood of a person can ultimately kill the person.

A person having kidney failure cannot survive unless his blood is filtered periodically through kidney machine to remove urea.

In kidney transplant, the damaged kidney is removed and a matching kidney donated by a

healthy person is transplanted in its place by performing a surgical operation.

Excretion in Other Animals

Other animals also excrete (or urinate) waste products from their body. The way in which waste products are excreted (or removed) from the body of the animal depends on the availability of water to it.

The land animals usually have less water available to them. The land animals such as birds, lizards, snakes and insects excrete a white coloured waste called uric acid in semi-solid form.